A Grade II Listed Building in Callow, County of Herefordshire 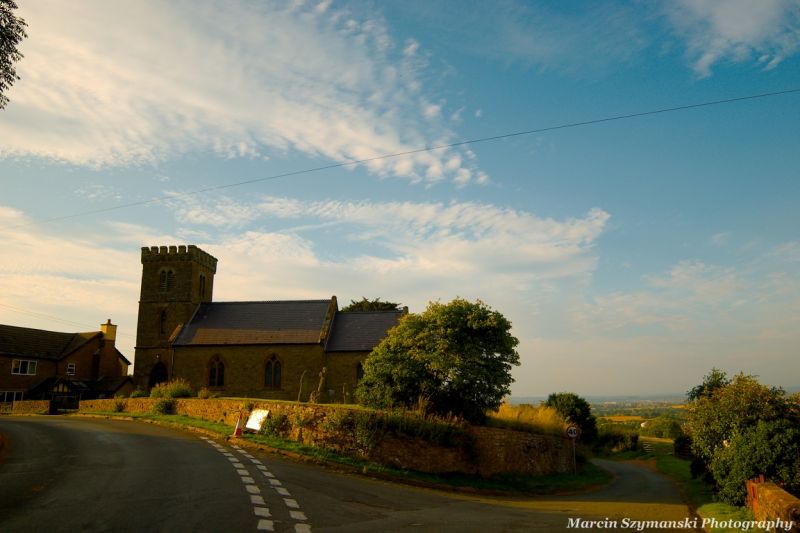 Find accommodation in
Much Dewchurch

Parish church. Rebuilt on site of earlier church in 1830 by L Johnson
and enlarged 1884 by Lloyd Oswald. Squared and rock-faced sandstone with
sandstone dressings and Welsh slate roof. West tower, two-bay nave, one-bay
chancel, vestry and organ chamber. West tower is embattled above corbel
table and has three stages divided by strings. Top stage has a pair of
chamfered lancets to each face. Middle stage has one central lancet to
each face except the east. Entry is in south side under 2-centred arch
with stepped lancets above the lintel of the doors. On north side of tower
is rock-faced late C19 gabled vestry with a pair of north-facing trefoil-
headed lights and a west doorway above the lintel of which is carved scallop-
ing. Nave has a pair of 2-light windows to each side. All four have pointed
lights, quatrefoil tracery and moulded cills. Verge with gable cross and
cresting along the ridge. Organ chamber over cellar on north side of chancel
has rock-faced sandstone like the vestry and the same type of trefoiled lights,
one pair to the north and another to the east. Doorway to west is also similar
to that of vestry. Small ridge stack to north gable. Chancel has one trefoil-
headed light to the north and a lancet to the south. The east window has three
stepped lancets in a 2-centred arch with moulded label. Above the outer lancets
is a pair of oculi in plate tracery. The cill is moulded with foliated ends.
Verge and cresting like those of nave with stump of gable cross. Interior
has stained glass window inscribed DARE QUAM ..... in north wall of tower
which is obscured from light by the later vestry. On the same wall are wall
monuments from the earlier parish church. One in stone with slate plaque
is for Henry Pearle, died 1670 " ... at the English factory of Bantam", has
scrolls to top, shield-of-arms and apron. Alongside is one for Elizabeth
Jones, died 1744 with oval slate inscription panel and stone Rococo cartouches
to margins. Beneath is a small corbel bracket in the form of an angel holding
a book. On the west wall of the same tower vestibule are monuments to John
Whitmore, died 1768, Francis Brickenden, died 1838, and Ann Brickenden, died
183.(?). Roof of nave has three trusses resting on corbels. Each has swept
braces, lower and upper collars. The latter are intersected by central posts
rising from the lower collars to the ridge. Chancel has open wagon roof.
Chancel arch is 2-centred with moulded label returning outwards as a string.
Stained glass east window of The Crucifixion is for Caroline Horton, died 1878,
Daniel Dimery, died 1877 and John Horton, died 1878. North window depicts
Christ with the inscription "I AM THE TRUE VINE/ I AM THE BREAD OF LIFE".
South window of Christ and the Children is for Sybil Horton, died 1884, the
infant daughter of Rev A W and Harriot Horton. C19 oak altar table with three
trefoil-headed openings to front. Pair of oak chairs, probably late C17, in
Caroline style with scrolled decoration to back, twisted rails and stretchers.
Oak Communion rails with twisted cast iron columns and wrought iron scrolls
and crosses. To north side set in an arch beneath a hoodmould is a two-manual
organ inscribed BRINDLEY & FOSTER/ 1887 SHEFFIELD with exposed pipes, trefoiled
and quatrefoiled panels and two swivelling brass sconces. In the organ chamber
is a fireplace with a 2-centred arch flanked by two oculi in style resembling
the east window. Pine desk and bench with openwork trefoiled decoration and
brass sconces. Nave is divided from chancel by low stone wall decorated with
row of small blind round-headed arches with battered cills. The wall rises
to a stone plinth supporting five-sided pine pulpit. Each side is decorated
by two trefoil-headed openings above which are four rectangles and cresting.
On the pulpit is a brass book-wedge and two brass candlesticks. Font probably
C13, has cylindrical stem on octagonal base. The rounded bowl has convex sides
and a trefoil-headed niche on the south side. Stained glass in easternmost
window of south side for Mary Dimery, died 1896 with Christ and St Peter.
Nearby is a wall monument for Daniel Dimery, died 1877 and churchwarden for
57 years, in stone and white marble with neo-Egyptian acroteria and pediment.
The window opposite is for W H S Horton, died 1895, and depicts Christ with
his flock and as Light of the World. Brass lectern, twisted shaft and two
scones. In the west wall is a small loop beneath a triangular-headed surround
giving sight from middle stage of tower. (BoE, p 97 ; RCHM, Vol I, p 34-5).