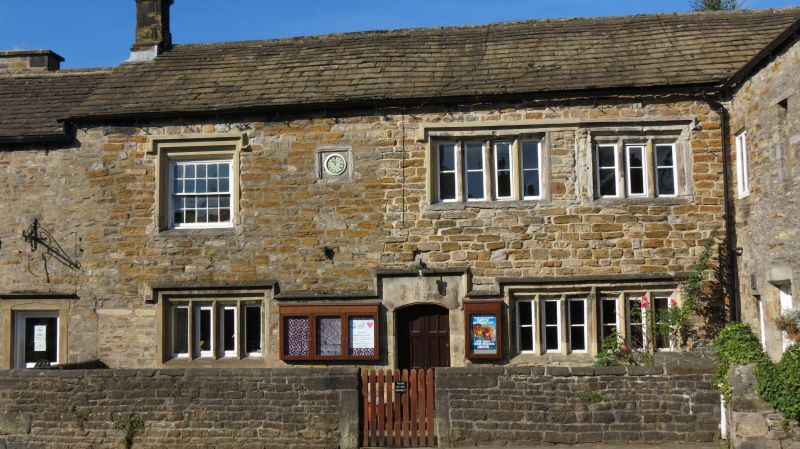 GRASSINGTON MAIN STREET
SE 0063-0163
(west side)
10/20 Church House
10.9.54
GV II
House, now public hall and chapel. Dated 1694, with C19 and C20
alterations. Coursed gritstone rubble, graduated stone slate roof. 2
storeys, 3 first-floor windows and projecting gabled bay to right. Main
range: central board door in chamfered quoined surround, the large lintel
is cut to a segmental arch and has raised lettering, " A " with cross
S P
and heart motifs. Recessed chamfered mullion windows throughout, of 4
lights to left of door and of 6 lights with a king mullion to right. A
continuous stepped drip moulding overall. To first floor: a 2-light window
with hoodmould; mullion removed and sill lowered when a 20-pane sash was
inserted, a 4-light and a 3-light window to right under a continuous
hoodmould. Between the first-floor windows there is a stone plaque,
possibly a former sun-dial, with C20 clock. Bay to right: C19 and C20
openings. Interior: entrance onto the side of a large fireplace with
voussoired arch and side oven, the stack removed . The house has been
attributed to Stephen and Alice Peart but the surname of the builder more
probably began with A. During the C18 it became a livery stables, the
Chapman family working from the house and stables in the C19. After a
period as a Temperance Hotel the building was bought by the church in 1924
and consecrated for worship. S. Brooks, A History of Grassington, 1979,
p35.