A Grade I Listed Building in Powick, Worcestershire 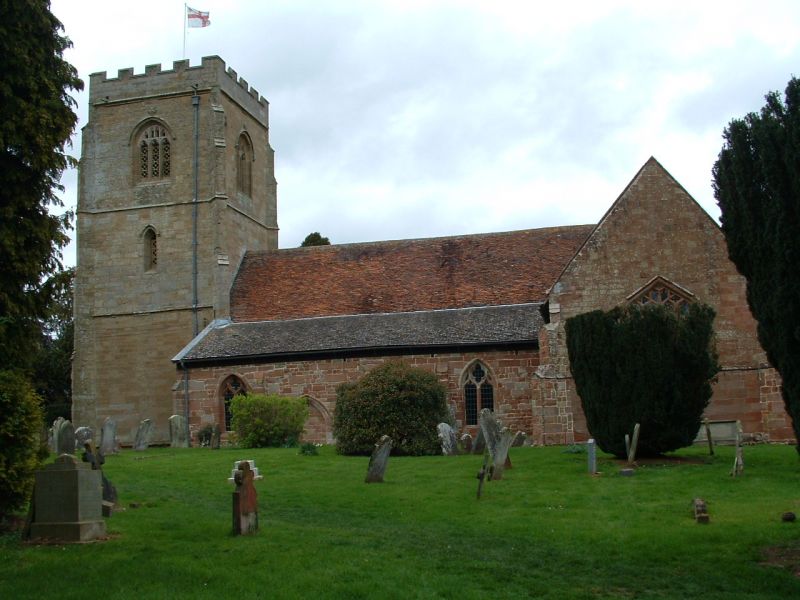 GV
I
Church. C13 and C14, with C12 remains and C15 tower. Restored 1845 and 1896-97. Squared sandstone, with ashlar tower and tile roof. Comprises a west tower, north and south aisles and transepts, and lower chancel.

Tower has diagonal buttresses and an embattled parapet. The bell openings are of three trefoiled lights under pointed traceried heads. The lights have pierced C19 stone infill. The west window is of four cinquefoiled lights with C19 mullions and tracery. The west doorway is also C19 and has a Tudor-arched head.

The transepts are of C12 origin. The north transept has a narrow chamfered round- headed C12 window in both its west and east walls. The north window is of five cinquefoiled ogee lights with Perpendicular tracery. The second window in the east wall is C13, of three trefoiled lights with a large triangular foiled opening above. The west wall of the south transept has a re-tooled window of two lights with Y-tracery. The east wall has a similar window, and a narrow C12 window with round head. The south window is of four pointed lights under a straight-sided pointed arch with tracery. The chancel is C13. The east end of the north wall has two lancets and two string courses. At the west end is a C14 window of two trefoiled lights with quatrefoil. To its left is a doorway with pointed arch. In the south wall are three C14 windows similar to the one on the north side. Between the second and third windows is a blocked doorway with canted head and raised chamfered surround. In the centre of the nave roof is a ridge tile with clay finial.

INTERIOR: reveals of pointed tower arch have blank tracery decoration. C19 stone screen divides tower from nave. The five bay nave arcades are of pointed arches chamfered in two orders. The octagonal piers have moulded capitals and are wave moulded in two orders. Above the nave is a collar-rafter roof with soulaces and ashlar pieces. The aisle roofs have moulded principals and purlins. The eastern arches are separated from the others and open into the transepts, which have transverse arches opening into the aisles. The chancel arch is chamfered in two orders, the inner order springing from foliated corbels. The roof has king-post trusses with iron straps. The C13 east window has banded shafts with foliated caps.

The font is C14 and has an octagonal bowl with quatrefoil panels which stands on a panelled and moulded stem and base. Memorials on the walls of the north transept include one to Daniel Tyas (died 1673) with Latin inscription and allegorical figures, and one to Mary Russell (1758 - 1786). The latter is by Thomas Scheemakers and has a semi-reclining female figure and a sarcophagus carved with mother and child and muscial instruments.