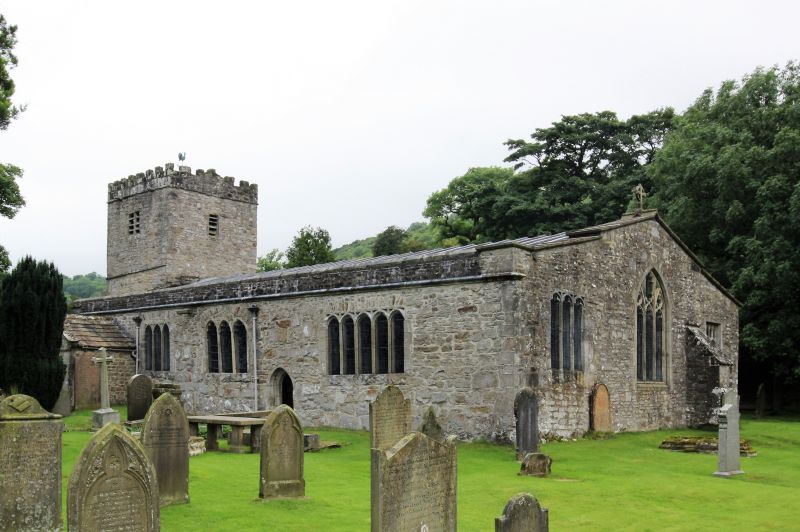 Church. C12 with C16 and C17 rebuilding, restored C19 and mid C20.
Limestone rubble, lead-coated steel roof. West tower of 2 stages; 3-bay
nave and l-bay chancel and aisles under one roof with north vestry. South
porch, gabled, with cyma moulded segmental arch and double board doors; a
date stone in the gable with "1696" in raised letters. South door to
chancel with board door, cavetto moulded pointed arched surround. Nave
south windows: 2 of 3 lights; that to left with round-headed lights and
cavetto mullions, the right of 3 cusped lights with straight chamfers. All
windows straight-headed and lacking solid sills. Chancel south window of 5
round-headed lights; nave south windows of 3 lights; to left as chancel, to
right with trefoil-headed lights. North side: nave windows are of 3 and 2
cusped lights, restored; vestry with C19 one-and 2-light windows. The
chancel north window is of 2 cusped lights, probably reset, with a
relieving arch. East end: a C19 decorated 3-light east window and 2-light
north aisle window. The south aisle east window is of 3 cusped lights. West
tower: a narrow slit window to lower stage, south side, a rectangular
window with leaded lights to the west face, a slit window above. Belfry
windows of 1 and 2 lights with stone louvres; a drip moulding between the
stages and below the battlemented parapet which retains the line of a
pitched roof on the east side. Boiler house between tower and north aisle
with mullioned windows brought from East Deepdale. Interior: the inner
door is probably C17, the boards fastened with square-headed nails and
having strap hinges. The archway has plain jambs and a slight roll
moulding to the round arch of 3 blocks. There are 2 steps down into the
church which has a north arcade with octagonal piers and depressed two-
centred double chamfered arches. The south arcade is round-arched, on
octagonal piers with flat capitals. The painted rood loft is dated 1558,
restored C20 and has a fine pierced east parapet with traceried arches,
linen-fold panelling and 4-petal flowers on the friezes. The altar rail
has widely spaced bulbous balusters; the pulpit has reused panelling dated
1641. The font bowl, probably C15, has reused quatrefoil recessed panels
with bearded heads and incised fleur de lis motifs; the rounded stem may be
earlier. N. Pevsner, Buildings of England, Yorkshire, West Riding, 1967,
p270