A Grade I Listed Building in Beckford, Worcestershire 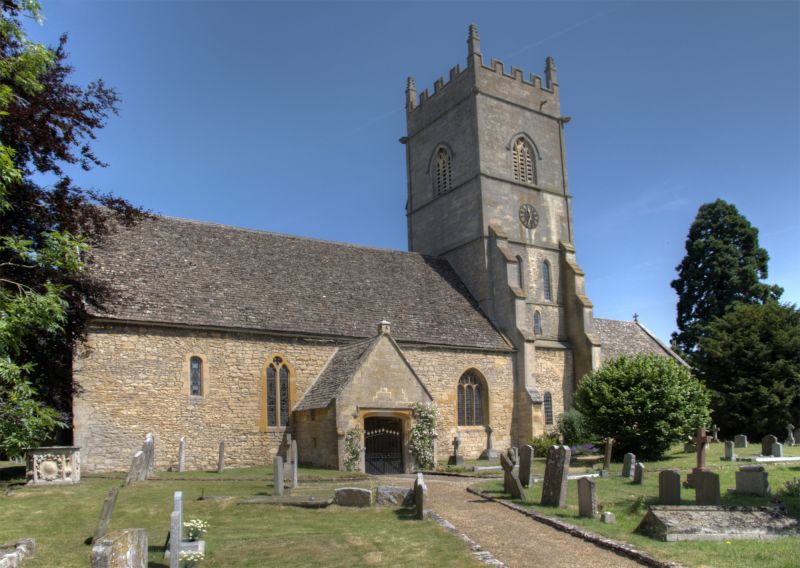 Nave: c1130. West end has an intermediate and an eaves level band which is interrupted by a large C15 window of five lights with a hoodmould and decoratively carved stops. Each side of the window are the surviving jambs of the two original round-headed west windows. The north elevation has an easternmost two-light C14 window with plate tracery and an original round-headed deeply splayed light at the western end. The north doorway is blocked and altered but a tympanum representing the Harrowing of Hell survives above a lintel enriched with a foliated frieze. The archway has a cable moulding and shafts with carved heads on the capitals which serve as corbels to the lintel. The south elevation has similar window openings and also a C15 window of three lights. The south porch is C15. It is gabled with an end parapet at the apex of which is a cube-shaped sundial with a ball finial. There are small diagonal corner buttresses, a basket archway of two chamfered orders with a square head and hoodmould, two rectangular openings (one above the other) in each side elevation and stone benches within. The south doorway is of four orders enriched mainly with cable and chevron mouldings; the two middle orders are shafted with decorated scalloped capitals. There is a holy water stoup projecting between the two central shafts on the east side. The sculptured tympanum is believed to be an illustration of animal creation adoring the Trinity. The tympanum stands on a richly carved lintel supported on head corbels.

Central tower: four stages with strings; the lower stage is offset and was formerly part of the C12 chancel. In the early C14 a three-stage tower was built with a spire and relieving arches were inserted in the north and south walls. This spire was replaced by the belfry stage in 1622. There are C19 buttresses with offsets beneath the belfry stage. The north west buttress is replaced by a shallow stair turret. The lower stage has a small C12 window each side and there is a doorway with a four-centred head in the south elevation. There is a C14 lancet to the north and south of the second stage and at the south east corner is carved a pair of heads. There are two large lancets to the north, south and east of the third stage. The belfry stage has three-light louvred bell-chamber openings with a continuous sill string and hoodmoulds; beneath the south opening is a clock face. Above is an embattled parapet with gargoyles at the base of each corner and crocketted corner pinnacles.

Chancel: early C14; east window has plate tracery with three lancets and two roundels in the spandrels. Side elevations originally had two two-light windows and a single-light window; the south west window was lengthened and bricked in the C17 and the northeast window was blocked in 1413 when chapel was added for Sir John Cheyne. The chapel was extended c1686-87 to form a vestry. This is gabled with end parapets, has a two-light mullioned east window, an east doorway and a single-light west window. It has a lean-to north addition with a catslide roof and two-light mullioned windows at both east and west ends.

INTERIOR: C12 west tower arch (former chancel arch) is of three enriched and shafted orders; carved into the central north shaft is a centaur, two human heads set horizontally and a human head on a spur at the base. The south shafts were mutilated when a three-decker pulpit was installed. Two blocked doorways to the north of the arch gave access to the rood loft. The remaining tower arches are chamfered and pointed. Embedded in the south nave wall is an attached C12 shaft probably from a former window. The nave has a C15 waggon roof with four moulded and arch-braced tie beams. The chancel has two intermediate queen-post roof trusses. There is a pointed arched piscina, a C17 altar table and the chancel screen of 1915 and part of the C17 screen.

The octagonal font is C15 and has a panelled bowl and stem, the former with quatrefoil tracery. Also in the nave are C15 corbels and a wall painting fragment. C19 pulpit and pews, the latter incorporates earlier woodwork.

Memorials: in the chancel is a memorial to Richard Wakeman of 1662 with an open pediment, coat of arms and unusually shaped pilasters, and also a mid C19 sarcophagus relief. In the tower are several mid C19 memorials to Archdeacon John Timbrill and his family and there are five early and mid C19 ledger slabs in the nave.

Glass: there is a panel of Flemish glass in the C12 north nave window.

A relatively large medieval parish church with a fine C15 nave roof and with impressive and unusual C12 detailing to its west tower arch and north and south doorways.