A Grade I Listed Building in Knighton on Teme, Worcestershire 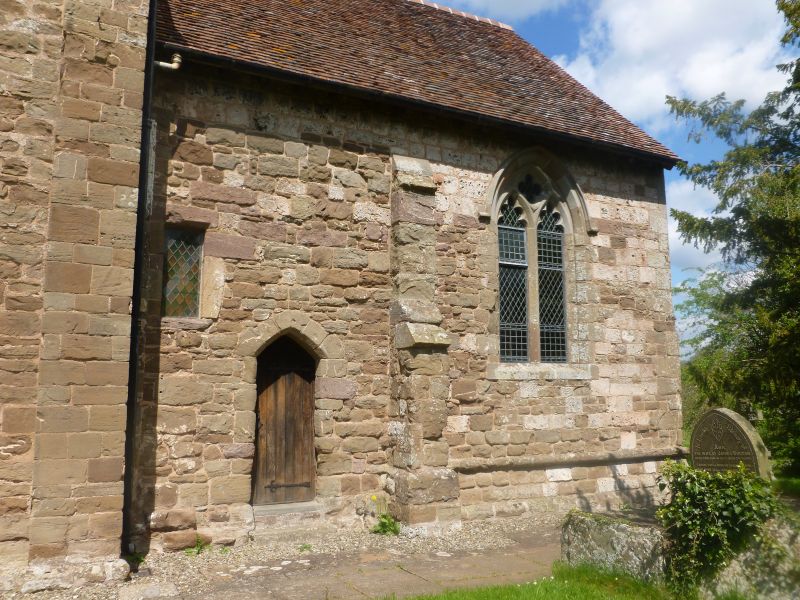 Nave:
early C12, extended to west late C12 and again in C15 to enclose tower;
chamfered plinth with string to late C12 part with pilaster buttresses at
junction of early C12 and late C12 parts and also at east end; the south-east
end buttress has been rebuilt. North elevation has a 2-light C13 window at its
eastern end; west of this are two small C13 lancets and between them is the
blocked north doorway; south elevation also has a 2-light window at its east
end but it is much restored and there is a 2-light C15 square-headed window
at the west. end; the central south doorway is similarly detailed to those at
the Church of St Peter and St Paul, Eastham CP (qv) and the Church of St Andrew
at Stockton on Teme CP (qv). It is tall and narrow with two round-arched orders,
the outer enriched with a sunk star decoration and springing from plain shafts
with cushion capitals; the inner order has two cable moulds and the east jamb
is cut away for a stoup; there is an old studded door with some C20 repairs;
above the door is a four-bay blind arcade, round-arched with engaged columns
and enriched with mouldings now barely discernible. The C15 addition enclosing
the tower is lower in height and has two lancets at its west end; in the south
elevation is a pointed doorway and a square wall memorial with an illegible
inscription. The bell-turret is a mid-C20 replacement and has a splayed
square base and short pyramidal spire with a weathervane. Chancel: late C12;
chamfered plinth and string; two round-headed C19 east windows with sill
bands; north elevation has two C19 lancets; south elevation has pilaster
buttresses at each end and also a later central buttress with offsets; east
bay has a restored 2-light window of the C13 which has a hoodmould with
returns; west bay has a pointed doorway and, adjacent to the nave, a rectangular
light.

INTERIOR: C12 chancel arch similarly detailed to the south doorway;
either side is a large round-arched recess with a two-bay blind arcade and
engaged columns with cushion capitals; above each is a plain tympanum. The
tower is separated from the nave by a C15 timber-framed partition with
rendered brick infill; at the centre of the partition an ogee-headed
doorway leads into the tower base, now used as a vestry and panelled with C18
box pews; narrow spaces either side of the vestry contain the massive posts
and struts of the old tower framework. The nave roof has C15 arch-braced
collar and tie-beam trusses with V-struts in the apex; tie beams, purlins and
wall plates are moulded and tie beams have central bosses; east end bay has a
ceiling divided into compartments painted red and green, and brattished wall
plates; chancel has a waggon roof. C19 piscina with cusped pointed head cut
into south-east jamb of south-east chancel window; C18 altar rails with turned
balusters; circular font with baluster stem; C19 octagonal pulpit; parish chest
set against blocked north doorway. Memorials: east jamb of north-east nave
window has small late C17 memorial surmounted by a large coat of arms to
John Cecill, died 1697; numerous ledger slabs in chancel, mainly C18 and to
members of the Milward family.