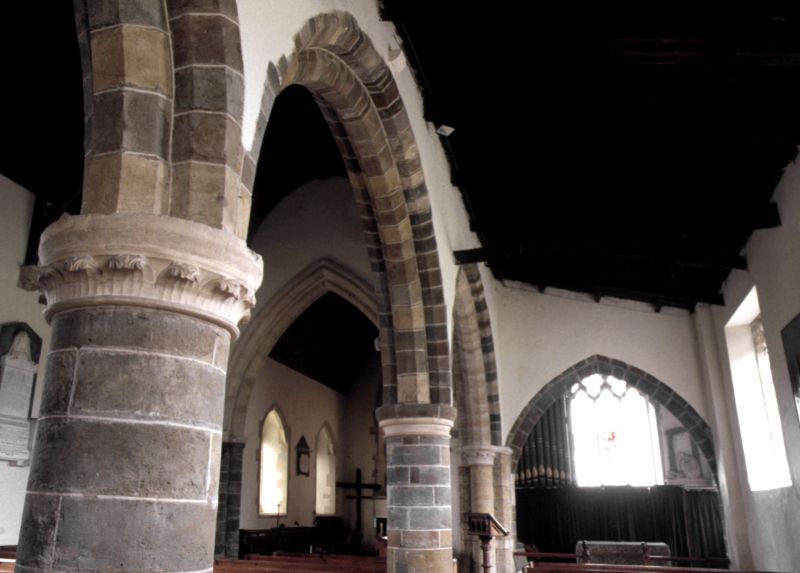 Parish church. C12, c.1200, c.1384, chancel C15, restoration of
1871-2 by James Fowler. Greenstone ashlar with limestone ashlar
dressings. Plain tiled and lead roofs. Western tower, nave,
south aisle, north porch, chancel. 3 stage late C14 tower with
corner buttresses, bell moulded plinth, chamfered offsets,
battlemented parapet with corner pinnacles and gargoyles. To the
belfry stage are 2 light louvred openings with ogee heads to the
lights and quatrefoils over. In the west wall a 3 light late C14
window with ogee heads to the lights and panel tracery. Above a
single light with cusped head. In the north side is a similar
light. The gabled north porch has a continuously moulded outer
door with small niche over. C19 side lights on east.
Continuously moulded C15 inner doorway with hood and C18 panelled
door. The north wall of the nave has single 2 and 3 light C15
windows, with panel tracery, concave moulded surrounds and hoods.
The C19 chancel north wall has 2 two light cusped traceried
windows with Cl4 reveals. In the east wall 2 C19 windows, both
of 3 lights with reticulated tracery. In the south wall of the
south chapel a 2 light C19 window also with C14 reveals. The
south aisle has three C20 three light windows with cusped ogee
lights and flat heads. In the west wall is a doorway comprising
a re-used mid C12 round arched head with billet moulded hood,
said to come from Calceby and C15 reveals with square hollow
chamfer and fleurons, with human heads. Interior. c.1200 3 bay
south arcade, round piers and responds, some stiff leaf foliage
on the capitals. 2 double chamfered round arches and one to the
west, slightly pointed, chamfered hoods and ammonite stops. Late
C14 tower arch, double chamfered and dying to the reveals.
Chancel arch has c.1200 annular responds now with double
chamfered pointed arch. Into the south chapel a double chamfered
arch. In the chancel south wall are 2 similar C14 arches with
stop chamfers and octagonal pier. In the south window of the
south chapel are reset panels of C17 Flemish painted glass. East
window by Clayton and Bell, 1873. Fittings are all C19 apart from
the fine font with panelled octagonal traceried stem, the bowl
has angel supporters and on the sides are shields with Symbols of
the Passion, and the Virgin Mary set in cusped roundels.
Monuments. On a panel in the south aisle wall a brass to Sir
William Skipwith, d.1482 showing the deceased and wife beneath
crocketed and pinnacled canopies with children beneath. Also a
female brass, half life size, with dog. In the south chapel a
white marble wall plaque in the Greek Taste to William Burrell
Massingberd d.1802, and other members of the family. Also 2
early C19 white marble plaques, one with a pedimented top, the
other a draped female mourning figure before a broken Corinthian
column, by Westmacott.