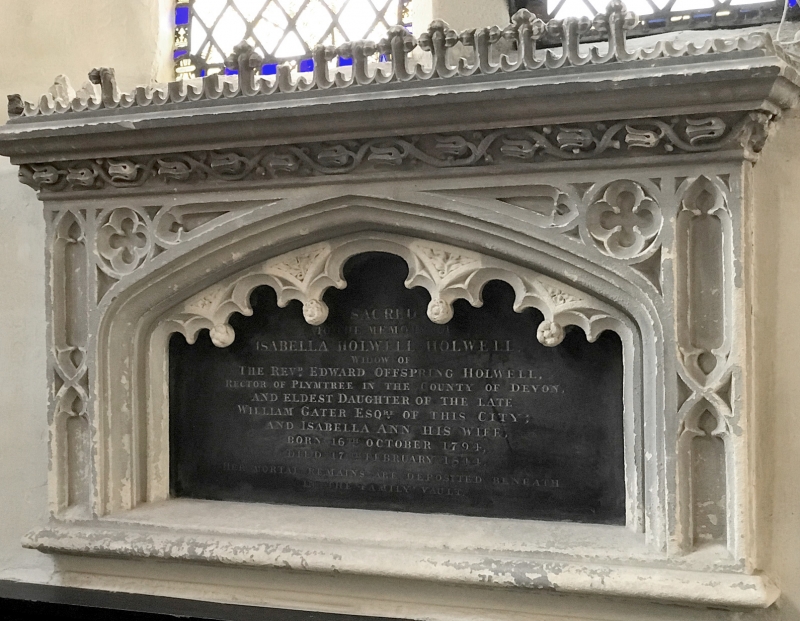 Medieval nave, chancel and tower. It has been suggested there is Saxon fabric here: further analysis may prove rewarding.

MATERIALS: Heavitree sandstone with some volcanic trap from Rougemont, limestone dressings (including Beer stone for the tracery). Slate roofs.

EXTERIOR: The church occupies an important position in the north-east angle of the cathedral close. The west end faces the close and has a large Perpendicular west window of five lights with a transom and panel tracery. Beneath it is a small west porch with a gabled head. On the north side is a tower midway along the north side of the nave. This plainly-detailed tower has a large stair turret on the west which is reinforced by iron bands: its top projects slightly above the plain parapet of the tower: the ground stage of the tower has a large, three-light Perpendicular panelled-tracery window. The tower has been treated with a light red protective wash. There is a large three-light Perpendicular window on the south side of the nave. The west part of the chancel roof is hipped and which is evidently designed to allow for the four-light timber window in the gable of the nave. The east window of the chancel is of four-lights and is perhaps C14. The east wall of the chancel is not at right angles to the body of the building, due to the constricted site; hence the chancel is longer on the south than the north.

INTERIOR: There is a tall arch without capitals to the tower and which is constructed of Thorverton or Raddon stone. The chancel arch has been truncated and is now capped by a segmental arch (to accommodate the window above). The nave has a waggon roof covering and which is divided into panels by ribs. In the chancel the ceiling is also of wagon shape but has no panelling.

PRINCIPAL FIXTURES: The walls are plastered and whitened. The church did not undergo any major Victorian restoration and there is extensive pre-Victorian woodwork but its date is not certain. The west gallery has a painting on its panelled front of the arms of Bishop Jonathan Trelawny (bishop 1689-1708). A further painting on the gallery is of the arms of George III in which the shield dates the work to 1801-16 and this is no doubt a piece of updating of the gallery decoration. The box pews may date from the late C17 or early C18 too. The panelled pulpit is variously dated as c1700 (Cherry and Pevsner; this is their date for the pews and gallery too) and early C19 (Scott). The twisted altar rails are probably late C17 and surround the altar on three sides. The reredos has two central arch panels, flanked by square ones: sadly the Lord's Prayer etc on them has been painted out. The font, under the tower, is an interesting item: it is plain and octagonal but on its north side, attached to the stem, has a small subsidiary bowl (very occasionally found on other English fonts) and may have been to hold the chrism used in medieval baptism. There is a hatchment on the south wall of the nave. There are a number of good wall monuments (detailed in Cherry and Pevsner); some of these come from St Paul's Church, Exeter (demolished in 1936). The most impressive is to Philip Hooper (d 1715; chancel north) which has him kneeling in a mighty wig at a desk with a pile of books in an architectural surround. The other significant monuments are to Judith Wakeman (d 1643), Edward Seaward (1703), John Codrington (d 1801) and Eliza Mortimer (d 1826). There is a little medieval glass surviving in the west and nave south windows. That in the south side of the nave has the arms of Bishop Lacy (bishop 1420-55) who is known to have given a window at the church (probably this one).

HISTORY: The first church on this site was consecrated on 6 July 1065 by Bishop Leofric who was the founder of Exeter Cathedral and which superseded that at Crediton. It has been suggested (e g Scott) that there is 'probably some of the original masonry in the walls of the nave.' This might be so but there is nothing at all that is architecturally characteristic of C11 in the fabric of the building. Pevsner and Cherry say that 'the north-east corner of the nave has, high up, decayed but convincing long-and-short work in volcanic trap'.

The site is a highly constricted one, so much so that when the tower came to be added it was built on land belonging to the dean and chapter of the cathedral and rent was charged for this occupancy until 1931. The datable features of the exterior are of the late C14 and C15. The church is now vested in the Churches Conservation Trust, and has been carefully conserved in recent times.

REASONS FOR DESIGNATION:
St Martin's Church, Cathedral Close, is designated at Grade I for the following principal reasons:
* It is of outstanding interest as a medieval town church and whose origins lie in late Saxon years. It retains its medieval fabric with datable features of the C14 and C15
* It is one of a group of small churches in central Exeter which collectively give a good sense of how major medieval English towns and cities were abundantly supplied with places of worship
* It was not restored in Victorian times and has retained an extensive collection consisting of pre-Victorian box-pews, gallery, pulpit, altar rails and pulpit
* It has a series of significant C17 to C19 wall monuments, in particular that of Philip Hooper (d. 1715)
* The church has exceptionally strong group value with the northern side of the Cathedral Close and the heart of the city