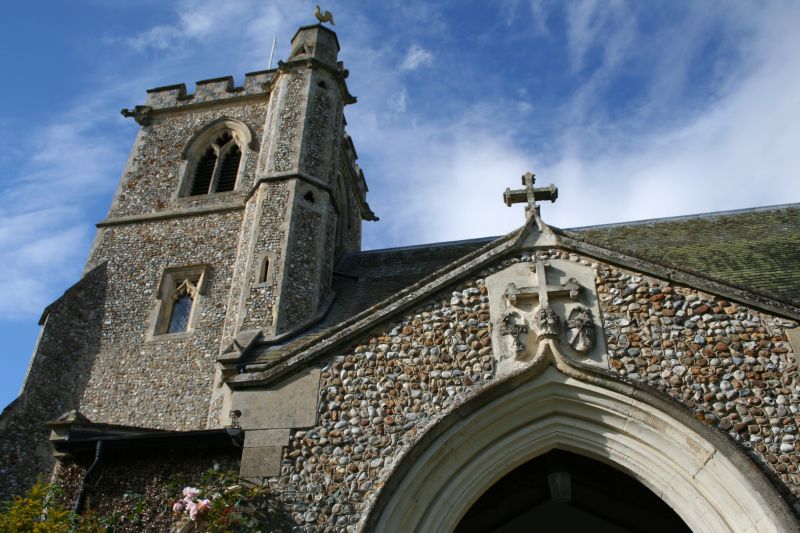 2.
A flint rubble church with a C13 nave and chancel but very much restored in
1855. The west tower, roofs, clerestorey and chancel arch belong to the restoration.
When the C15 west tower was rebuilt in 1855 there was discovered the remains
of an earlier norman round tower. The nave arcades are of the C13, the north
arcade has circular piers and the south has octagonal. The chancel has 2 pairs
of lancet windows in the north and south walls. The south porch is C15. The
interior has some important monuments including a C15 effigy to a priest, with
a recumbent figure bisected by 2 arches situated in the north wall of the chancel,
an elaborate C15 canopied wall monument to Richard Cutte (d 1592) and his wife
with recumbent figures in the south aisle, and, in the west tower, a C17 marble
wall monument carved with sculls and branches and with 2 good busts of John
Withers (d 1692) and his wife. Thought to be by Roubilliac, but recently attributed
to Edward Pierce by Nickolaus Pevsner. There is also a military brass to Richard
Fox (1439). The church is situated on rising ground above the village and
it forms a prominent feature. Graded for its architectural, historical and
topographical value. (RCHM 1).