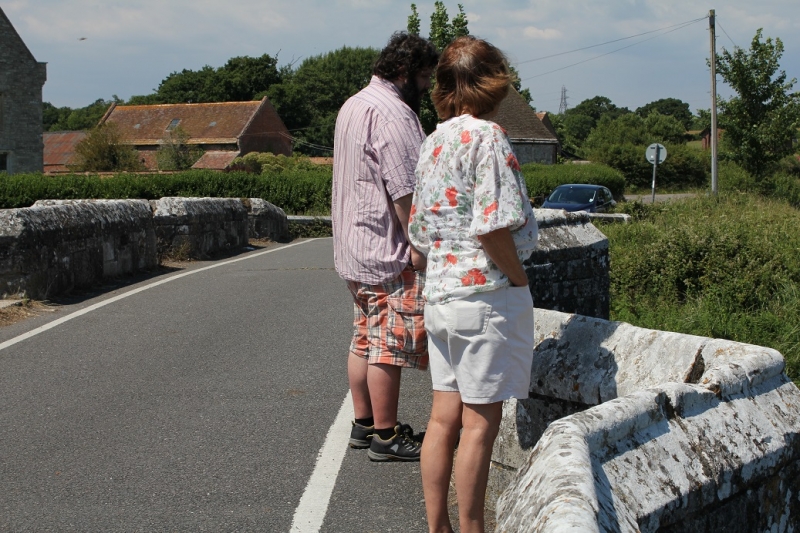 A C16 bridge, with later alterations, spanning the River Frome on the civil parish boundaries of Wool and East Stoke.

A road bridge of c.C16 date with later repairs and C20 alterations.

MATERIALS: ashlar stone of varying types, and red brick to the south arch.

DESCRIPTION: a multi-span, curved bridge, originally of five arches but with an additional C19 flood arch to the south. The additional arch is on a different alignment. The main segmental arches are each strengthened by three wide ribs beneath. The largest arch spans just over 15ft. There are four river piers to each side, which have large cutwaters upstream and smaller ones downstream. They extend up to a low parapet where they form pedestrian refuges. The parapet has moulded coping. The initials F.T. and the date 1688 have been inscribed on a stone now reset in modern brickwork (RCHM). An 1806 date is inscribed on the face of the far right end pillar (Wallis). The surface of the bridge is modern tarmacadam.

The placename `Wullebrigg', recorded in 1244, is associated with the site of Wool Bridge. The bridge is recorded as having crossed this point of the River Frome in 1343. The current structure is probably of C16 date and historical records indicate that repairs were carried out in 1607 and 1688. It was the first bridge ordered to be repaired as a county bridge in 1742, and some repair work was also carried out in 1806. An additional flood arch, built in the south approach causeway, is probably of late-C19 date. During the Second World War, the end arches were widened and the parapets removed for the passage of tanks. The parapets were later rebuilt using the same stone. The bridge is now closed to traffic, except pedestrians and cyclists. The bridge features in Tess of the d’Urbervilles by Thomas Hardy due to its location next to Woolbridge Manor (qv), the home of the Turberville family. It is considered to be the best preserved Elizabethan bridge in Dorset.

Wool Bridge, Dorset is listed at Grade II* for the following principal reasons:
* Relative date: the bridge remains substantially a C16 structure, and the best preserved Elizabethan bridge in Dorset;
* Architectural interest: it is a neatly-made structure with very well constructed arches to the spans, and deep, pointed cutwaters with contemporary refuges;
* Group value: with Woolbridge Manor (qv), both of which feature in Tess of the D’Urbervilles by Thomas Hardy.