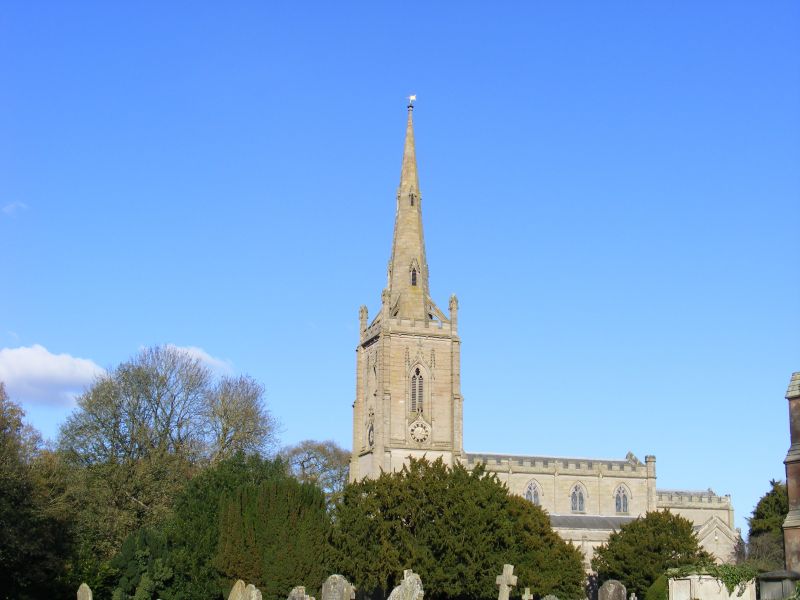 Parish church. 1825-9 by Thomas Rickman and H Hutchinson for the
Marchioness of Downshire on new site. Sandstone ashlar, slate roofs behind
parapets. West tower with north and south lobbies, four-bay aisled and.
clerestoried nave, two-bay chancel with transepts. Decorated style imposed
on essentially Georgian plan. Continuous plinth with string course above;
all windows have hoodmould with foliated label stops if no other detailing
described. West tower: three stages with three strings, angled corner
buttresses with offsets; lowest stage has pointed-arched west doorway;
north and south sides have lobbies adjoining aisles with plain parapets
above a moulded cornice, 2-light west windows and pointed-arched doorways
with crocketted and finialed ogee-arched hoodmoulds in their respective
north and south elevations; second stage has a 2-light west window with
crocketted and finialed ogee-arched hoodmould; tall belfry stage has a
long central pointed archway with crocketted and finialed ogee-arched hood-
mould and buttresses with offsets and pinnacles each side; at the base of
the archway is a clockface with an ogee-arched and foliated head and, above,
a 2-light louvred bell-chamber opening; the moulded cornice has four
decorated corbels to each elevation and above is an embattled parapet
between tall corner pinnacles with gablets; recessed spire has flying
buttresses to each corner pinnacles and cusped lucarnes near the base and
about half-way up; at the top of the spire is a finial and weathervane.
Nave: four bays with embattled parapets at the west end corners, angled
buttresses with offsets at the west end and narrow buttresses with gablets
between bay divisions at clerestorey level; 2-light clerestorey windows;
lean-to aisles have plain parapets, buttresses with offsets at bay divisions
and 3-light windows; both aisle and clerestorey windows have varied tracery.
Chancel: two-bay and has an embattled parapet; east end has angled corner
buttresses, a 4-light window and a loophole in the gable apex; the transepts
project from the westernmost bay and have a plain parapet, diagonal gable
end buttresses and blocked, cusped lancets in each gable end with a loop-
hole in the gable apex; the east elevation of the south transept has a 2-
light window and a doorway, both with pointed arches; the east elevation
of the north transept has two pointed-arched 2-light windows and in the
angle between the north transept and the nave is a porch with pointed-arched
doorway. Interior: four-bay nave arcades on compound piers, the inner shafts
of which have moulded capitals and bases; the arches are pointed and above is
a continuous hooldmould. Chancel arch is a plain pointed arch with hoodmould
and foliated label stops, plain tower arch and arch from south aisle into
transept. Archways from chancel into transepts have crocketted and finialed
ogee-arched heads, boldly detailed; the north archway is blocked and the
south leads into only one bay of the transept; the north transept is used
as the choir vestry and the south one as the Vicar's vestry. Roofs have
quadripartite plaster vaulting, foliated bosses and vault shafts on moulded
corbels. The interior is limewashed and the vault ribs and bosses and the
main archway details were painted with bright colours when the church was
redecorated in the 1970's. Beneath the clerestorey windows is a frieze
of three round-lobed quatrefoils. On either side of the altar are panels
inscribed with the Ten Commandments, the Creed and the Lord's Prayer set
within crocketted and finialed pointed arches with pinnacled buttress on
each side. Panelled reredos, altar rails, pulpit, lectern and font,
the latter given by the Sandys family in 1888. Nave has north, south and
west galleries and original 1826 box pews, at the east end of south aisle
is a large box pew with a Gothic fireplace for the Sandys family; the space
between the west gallery and rear box pews has been glazed to create a
Narthex. In the north aisle is a Gothic cast iron stove by Robert Harden
of London, made to represent a church tower. C18 parish chest in northex.
Memorials: at west end of the north aisle is late C18 cartouche to James
Tippets, died 1770 and William Wiltshire died 1795; also Dobey family memorial
of early C18 date of a woman leaning on a vase and Yarrington family memorial
of early C19; at top of the south aisle is a mid-C19 memorial to Charlotte
Blundell Hill; at the east end of the chancel are three mid-C19, a late C19
and an early C20 memorials to the Sandys family. This large estate church
by Rickman is undoubtedly one of his better churches comparable to Hampton
Lucy in Warwickshire. (VCH Vol III, pt 2; BoE).