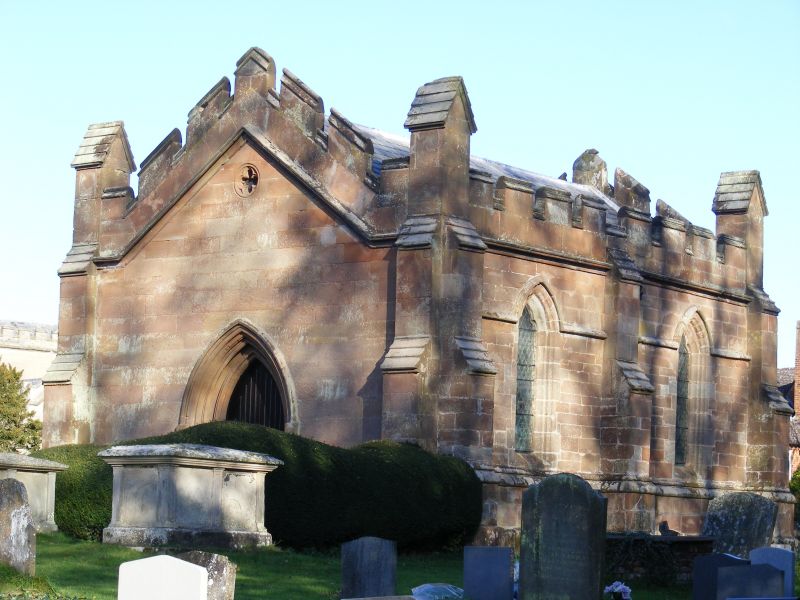 Entry Name: Sandys Mausoleum About 75 Yards South-West of the Church of St Andrew

Part of old parish church, now mausoleum. Late C13 with c1830 alterations.
Sandstone ashlar, gabled slate roof behind embattled parapet above a moulded
cornice. Two bays, being the surviving end two bays of the former chancel.
Early English style. Three buttresses with offsets to each side elevation
and angled buttresses at east end; end buttresses have gabled pinnacles;
continuous plinth with string course above. Side walls are C13 and have
two cusped lancets in deeply moulded reveals with a hoodmould returning to
continue as a string course. East and west ends are C19; east end has a
blind ogee archway with poppyhead finial and flanking crocketted pinnacles;
in the gable apex is a trefoiled opening. West end has a heavily moulded
pointed arched doorway with hoodmould and plain label stops and a quatrefoil
opening in the gable apex. Interior: roof structure renewed during mid-C20
Windows have rear arches on slender .colonnettes with moulded capitals and
bases, hoodmoulds which return and continue as a string course and there is
a second string course at sill level which, on the north side, rises as if
above a square-headed tomb recess although the wall is flush beneath; on
the south side this string course forms a hoodmould above the piscina and
sedilia. Piscina has a cusped pointed arch and star-shaped basin; the
three sedilia also have cusped pointed arches, slender colonnettes at each
end with moulded capitals and bases and the central arch is supported on
diminishing corbels, themselves resting upon carved human heads. C17 oak
altar table with carved baluster legs and inscription around top rail; C19
brass altar rails. Sandys family wall memorials include at east end, to
left an early C18 one with broken pediment, coat of arms on spiral columns
with Corinthian capitals and an angel head corbel beneath; and on the right
side a late C17 cartouche with grieving cherubs and a coat of arms above;
on the north side is an early C18 memorial in form of a sarcophagus with a
bust on top and coat of arms beneath, and, at the west end, is a mid-C18
memorial with a shouldered architrave, pediment containing the coat of arms
and a swag beneath. There are three late C17 ledger slabs at the east end;
also a hatchment on the east and west end walls. (VCH Vol III, pt 2; BoE).