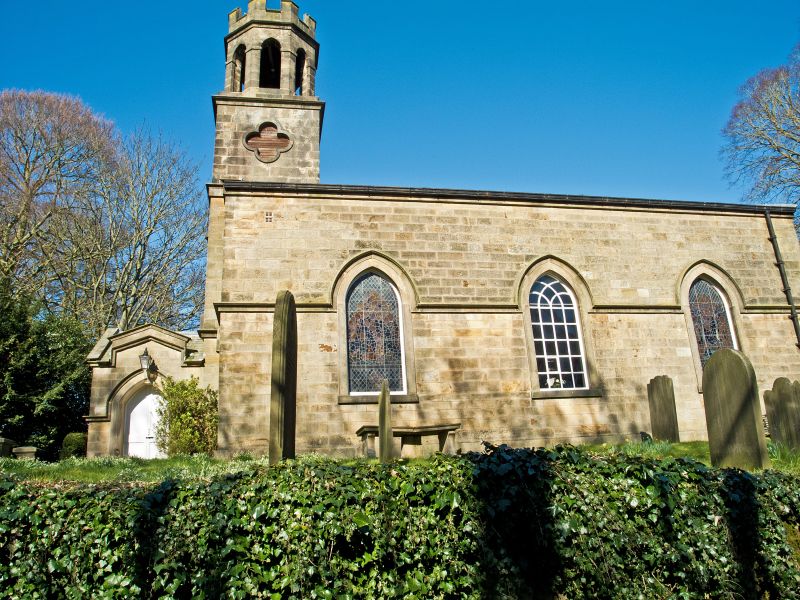 Church. 1776. By John Carr for the Ibbetson family of Denton Hall.
Coursed squared gritstone, grey slate roof. 3-bay nave and chancel with an
integral west tower and a possibly additional single-storey west porch, in
Gothick style. Plinth. The porch has pointed double doors on the south
side, a finialed hoodmould and eaves cornice with pedimented blocking course
above. Nave: 3 pointed windows, the central one with original interlaced
glazing bars. Continuous hoodmould, eaves band, gable coping. Nave left
return: porch flanked by small arched windows with interlaced glazing bars;
the tower west wall breaks forward slightly and there is a window of 3
trefoil-headed lights with hoodmould to first floor. The tower lower stage
has large quatrefoil recesses; the upper stage is an open octagonal
embattled belfry with pointed arches to each side. Nave, east end: Venetian
style window with large pointed-arched centre light flanked by lower narrow
round-arched lights. The architrave has classical mouldings and the
continuous hoodmould of the south side is carried above the flanking lights.
A projecting band at eaves level forms a pediment to the gable. North side:
2 blind pointed-arched windows; entrance to crypt covered by a lean-to roof,
centre; taller lean-to addition left, with square 4-pane sash in left
return. Interior: inner door between porch and nave has 3 tiers of 3
trefoil-headed panels and opens into a vestibule beneath the west gallery,
with 6 panel doors to left and right. The left door opens onto a stone
spiral staircase, the right into a small vestry. Nave, east end: 2 stone
steps to the sanctuary with fine carved oak pulpit and priest's stall given
in 1908. The east window has painted glass depicting King David and St
Cecilia with angels and musical instruments and is signed "Henric' Giles
Ebora' pinxit 1700". The flanking lights contain heraldic emblems and coats
of arms. West gallery: supported and framed by a tall round-headed arch;
the: balustrade of double vase balusters. The shallow-pitched nave roof
supported by 5 king-post trusses with splayed struts form the base of the
king, post. Font: south-west corner of nave; a splayed fluted shaft with a
shallow octagonal bowl decorated with gadrooning, the lid a later addition.
Wail memorials of the C18 and early C19 to the Ibbetson family of Denton
Park. A grave stone-fastened to the outside of the north wall of the porch
has the remains of an inscription commemorating Frances, wife of Henry Lord
Fairfax who died in 1683.