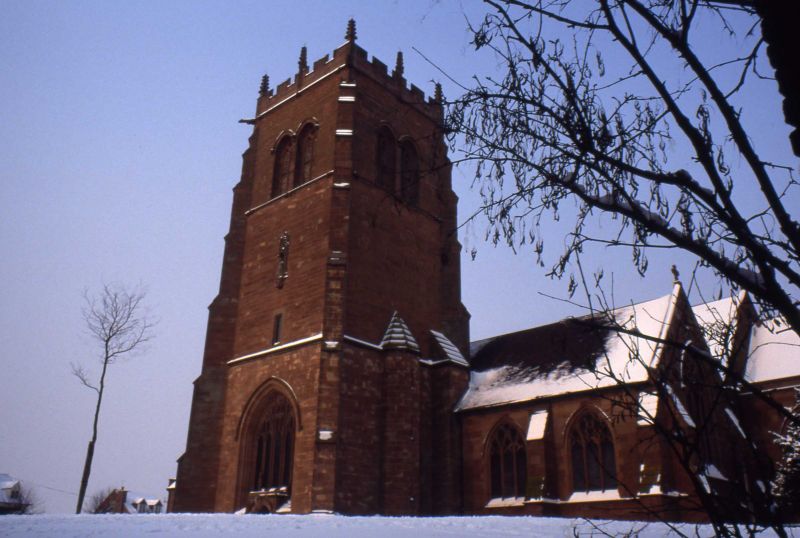 PLAN: Rectangular plan of nave with aisles (south aisle 1 bay shorter) under separate roofs, lower chancel, projecting south-west tower and an octagonal library on the north side of the chancel.

EXTERIOR: The earlier C19 work is in the Geometrical style (ie. Of the later C13), the south tower Perpendicular. The main entrance is through the 3-stage tower, incorporating a porch in its lower stage. It has diagonal buttresses, higher polygonal north-west stair turret with crocketed spirelet, and string courses between stages, with grotesques beneath the crown. The C15 south doorway has panelled reveals, beneath a large 5-light south window. In the second stage is a figure of St Leonard in a niche. In the upper stage 2 transomed 2-light bell openings have stone-tracery sound holes. The embattled parapet has crocketed pinnacles. Aisles mainly have 3-light windows. The broad nave has a pair of 3-light west windows above a west doorway with 2 orders of nook shafts. The chancel roof is behind a moulded parapet. The chancel is 3 bays, and has 3-light south windows, of which the central is shorter, above a priests' doorway. The east window is 4-light; the north side has 2 windows and a squint, the third bay occupied by a short link to the octagonal library under a pyramidal roof, resembling a scaled-down chapter house. Windows are alternately simple 2-light mullioned windows beneath the eaves and tall 2-light dormers with quatrefoil tracery lights.

INTERIOR: Nave arcades (5-bay to the north and 4-bay to the south) have round piers, with foliage capitals carved by S. Poole, and 2-centred arches. On the south side the third bay from the east is subdivided. Its subsidiary pier depicts the Expulsion from Eden on the capital, and in the solid tympanum of the main arch is a roundel depicting in relief the Annunciation to the shepherds, both carved by James Redfern. The right-hand of the subsidiary arches is blind with diaper pattern and memorial inscription to George Fisher (d 1881). The nave has a hammerbeam roof of 1662, on corbelled brackets. The north aisle has a tie-beam roof on elaborately carved solid corbelled brackets. In the south aisle is a 2½ -bay double hammerbeam roof and, at the west end, a 2-bay double hammerbeam roof set at right angles. The chancel arch has a continuous roll moulding with hood mould with angel stops, and an inner order on corbelled shafts with foliage capitals. The chancel roof is 5½ unequal bays, and is a hammerbeam roof on brackets and big angel corbels, which are said to have been retained from the medieval roof. In the south wall is a double piscina and stepped sedilia. The tall tower arch is panelled, and spanned by a 3-bay Geometrical-style stone screen dated 1862. The base of the tower has a lierne vault. Walls are light red-brown plaster, except for ashlar walls in the chancel and tower base. Nave and aisles have floors of red and black tiles, and raised wood floors beneath pews. In the chancel floor, which is stepped, are memorial mosaics and decorative tiles, and encaustic tiles in the sanctuary were copied from those at Coutances Cathedral.

PRINCIPAL FIXTURES: The elaborate octagonal font by T. Earp (1894) has marble shafts with sculpted marble figures. The tall font canopy is by J. Phillips of Liverpool, added in 1911. The polygonal wooden pulpit, by James Forsyth of 1862, has 2 tiers of elaborate foliage roundels, except for the main large roundel depicting Christ instructing his apostles to preach. The lectern of 1929 is by J. Phillips and carved of elm, a large trumpet-bearing angel. The stone chancel reredos, 1882 to the design of R.H. Carpenter and built by T. Earp, depicts the crucifixion, flanked by gabled niches with figures of the Four Doctors. There is a chapel in the south aisle, created in 1898, which has a reredos by Charles Spooner for the Guild of Handicraft, with triptych by Frank Smallpiece. Pews have panelled ends. Against the south aisle are simpler pews with shaped ends and open backs. Choir stalls of 1891 are open-fronted with reticulated-tracery panels. The ends have carved arm rests and angels at the ends of the backs. The priests¿ stalls are canopied. There are several monuments of special interest. In the chancel north wall is a Baroque wall monument to Francis Wheeler (d1686) with broken segmental pediment and urn. Next to it is a monument to Sarah Wheeler (d 1685), comprising an eared panel with broken pediment. In the south aisle walls are 4 cast-iron ledgers of the period 1679-1707. Also in the south aisle is a brass plaque to William Francis Oldham (d 1899), showing a kneeling knight in relief, in a red marble frame. There are several windows containing stained glass. Clayton & Bell made the Te Deum east window (1876), saints in the south aisle (1874), Baptism in the tower (1873) and historical figures of the Church in England (1879-1908) in the north aisle. The chancel north window of the Good Samaritan is by W. Done (1873), and the chancel south window is by William Wailes (c1847), showing the Canticles.

HISTORY: The church is of C12 origin, and became a substantial medieval town church. The tower was built in 1448 at the expense of Richard Horde. The church was badly damaged in the Civil War in 1646, when the north aisle and east part of the south aisle were destroyed. The nave roof was rebuilt in 1662, but the aisles were never fully restored. Repairs to the chancel were undertaken in 1826 by Thomas Rickman, and the chancel was restored 1846-47 by F.J. Francis. From 1860 a major reconstruction began, by W. Slater & R.H. Carpenter, who rebuilt the church on the old plan but in a consistent Geometrical style. Only the tower, which was substantially rebuilt in 1870-73, also by Slater & Carpenter, is in its original Perpendicular style. The contractor was Albert Escourt of Gloucester. An octagonal library was added to the north side of the chancel in 1878. A library for the use of the clergy had been bequeathed by Hugh Stackhouse (d 1743). In 1968 books were removed from the library and taken to Shrewsbury. The church has been redundant since 1976 and has been in the care of the Churches Conservation Trust since 1980.

REASONS FOR DESIGNATION: The church of St Leonard, Bridgnorth, is designated at Grade II* for the following principal reasons:
* It is a well-designed C19 Gothic revival building, retaining interior details such as arcade capitals, of high quality.
* Earlier architectural features include a good and unusual C17 nave roof.
* It has memorials of special interest, including late C17 - early C18 cast iron grave slabs.
* It has C19 and C20 fittings of high quality, including the unusual lectern.
* The church has group value with other buildings in St Leonard's Close and makes an important contribution to the Bridgnorth historic townscape.
* The impact of Civil War damage is reflected in the building's history, and is itself of significance.