A Grade I Listed Building in Ixworth, Suffolk 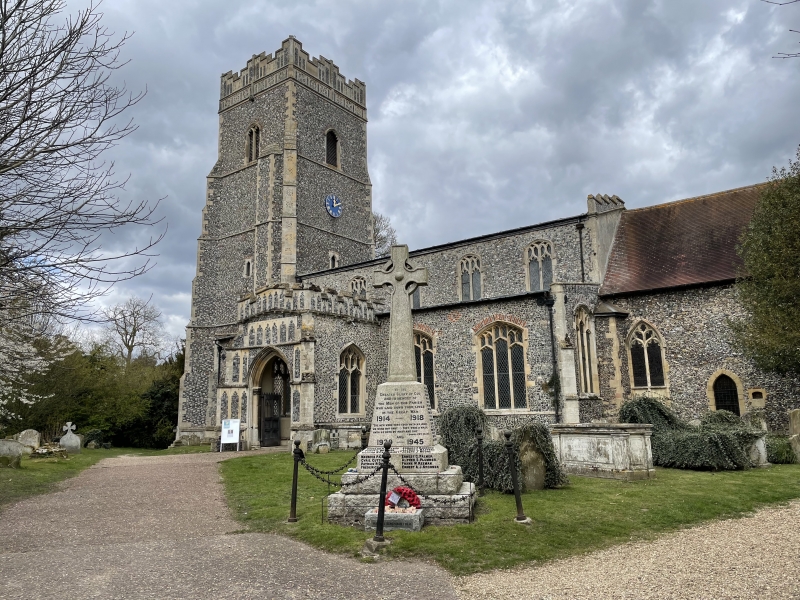 GV
I
Parish Church. Principally in random flint with freestone dressings. Late C14
south porch in knapped flint, with embattled parapet and flushwork panelling to
south face. Late C15 nave with clerestorey: north and south aisles. Nave roof
in 5 bays: low pitched, cambered and moulded tie-beams with winged angels at
base of braces and along cornice. Similar mouldings on both aisle roofs. Nave
and aisle roofs are leaded: money for 'ledying' bequeathed by Robert Garrard in
1533. Floors paved with small C18 tiles in cream and red. Mid C19 pulpit and
bench ends: traditional poppy-heads. C15 octagonal font, probably originally
on a high base. An iron-bound alms box near the south door. C14 chancel,
heavily restored in 1850's. Steeply pitched, plaintiled roof. On south side
the priest's door has a holy water stoup set into wall beside it. At the east
end, an external niche with cusped head, which probably contained a stone rood.
In the south east angle, an external turret for the stair to the rood loft.
Roof with alternate arched brace and hammerbeam trusses: spandrels infilled
with delicate tracery. C13 double piscina. On north side, tomb chest with
decorated pilasters and 3 shields to Richard Coddington (d.1567) and his wife:
Italian leaf-carving on rounded arch of back, 3 vertically-placed brasses.
Memorial east window of 1860's in Decorated style. Late C15 west tower with 4
diagonal buttresses and battlemented parapet. The plinth, parapet, and the
faces of the buttresses have decorated panels and emblems in knapped flint. The
third panel up on the south-east buttress has the crown and arrows saltire of
St. Edmund and the inscription 'Mast Robt Schot Abot': Robert Schot came from
Ixworth, and was Abbot at Bury St Bdmnnds from 1469 to 1474. 3 inscribed
tiles, 2 from the south wall, the other from near the west doorway, are now
placed inside the base of the tower: those from the south wall are dated 1472;
the other reads 'Thome Vyal gaf to the stepil iiij li'. Thomas Vyal left £4 to
the building of the tower in his will, proved 1472. This dating evidence
indicates that work on the tower began in the 1470's.