A Grade I Listed Building in Rattlesden, Suffolk 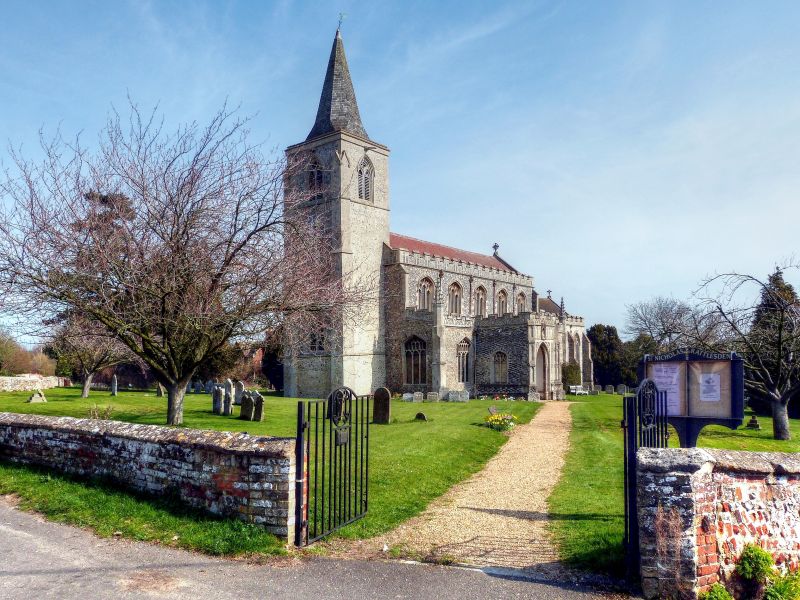 RATTLESDEN UPPER STREET
TL 95 NE
3/120 Church of St. Nicholas
-
15.11.54
GV I
Parish church, medieval. Nave, chancel, north and south aisles, south porch,
west tower and north vestry. Mainly flint rubble with freestone dressings.
Plaintiled roofs to nave and chancel, flat roofs to aisles. Parapets and
parapet gables throughout. C13 features: good south doorway with 3 orders of
roll moulding, keeled or filleted, twin attached shafts with bell capitals.
Above the doorway is a C13 circular window, and a weathering for an early
porch. Much early C14 rebuilding: tower with shallow clasping buttresses,
gabled at the head with grotesque corbels. 2-light belfry windows with
unusual tracery. Shingled spire. 5-bay nave arcade with heavy capitals and
fluted octagonal piers; at the head of each is a cinquefoil beneath the
capital. C14 north doorways in nave and chancel, and to vestry. An aumbry
with gabled head rising from grotesque corbels and with flanking shafts and
damaged pinnacles. Later C14 wide chancel arch: The aisles have large
traceried early C15 windows. In the east wall of both aisles are well carved
but mutilated image niches; the niche in the south aisle has areas of
colouring, and adjacent is a piscina. A rood loft stair is in the south wall,
indicating a former parclose screen linking with the main rood screen (both
existing screens and lofts were added in 1909/16). Later C15 tall windows in
chancel. Fine C15 clerestory: embattled parapets with extensive flushwork
incorporating a wide variety of emblems. Large 3-light windows. A double-
hammerbeam nave roof in 10 bays: 3 tiers of restored angels at each truss and
a frieze of angels and crowns above a moulded cornice. Chancel roof of C15,
boarded with trefoil coving, moulded ribs and cornice and foliate bosses.
Aisle roofs with arch-braced principals also C15. All roofs much restored.
South porch added c.1476: the south wall is entirely of freestone with
traceried panels and an image niche. The parapets are also of panelled
freestone, continuous with those of the aisle. The clasping buttresses at the
west corners match those in the tower, but the pinnacles were added in 1883.
The sacristy was added in C15 to north of chancel, and formerly had a chamber
above: the upper floor structure was removed in C19. Fine mid C14 octagonal
font: each face of the bowl has a cusped ogee-headed arch with buttresses
rising from grotesque corbels, and the stem is also traceried with slender
buttresses. A C15 slab in the nave floor with brass sinkings for three
figures, and another with single brass sinking. A further slab beneath the
altar in the chancel is to James (1587) and Dorothy (1617) Ryvett of Clopton
Hall. Ten C17/C18 marble slabs in chancel floor, some with achievements. C17
octagonal pulpit with arcaded panels. Turned altar rails of late C17. Some
restored C16 poppyhead benches in south aisle.