A Grade I Listed Building in Walsham Le Willows, Suffolk 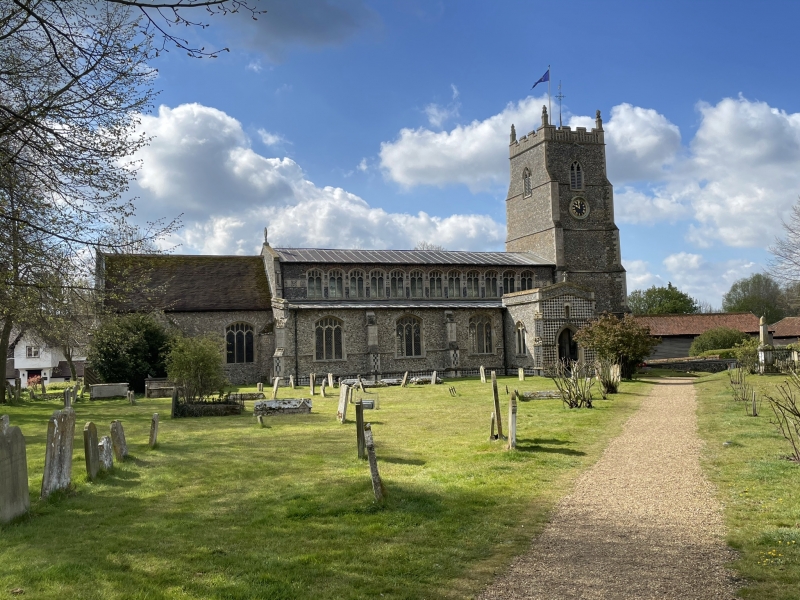 Parish church. C14 and C15, in Perpendicular style throughout. Interior
restored 1878. Nave, chancel, north and south aisles, north porch and west
tower; a small vestry added to the north side of chancel. In random kidney
flint with strap pointing; freestone dressings; lead roofs to nave and aisles;
plaintiles to chancel. The tower has a moulded freestone base; random black
knapped flint to the lower stages with an admixture of small stone blocks; 5
stages; the buttresses, diagonal on the west-end and faced with freestone, are
stepped in 4 stages. Stair turret, with 4 small slit windows, on south side.
West door with continuous multiple moulding to arch, and hood-mould; 3-light
window above with mouchettes in the tracery; a 2-light cusped window to each
face of the top stage. Embattled parapet faced with trefoil flushwork panels;
corner pinnacles with heraldic beasts. The north aisle has a base of lozenge-
patterned flushwork and 3 3-light windows with cusped traceried heads;
diagonal stepped buttresses to east and west faced with flint and stone
panels. The fine north porch projects from the north aisle, and is faced
entirely in lozenge-patterned flushwork. An empty ogee-headed niche above the
doorway. Shallow-pitched open timber roof with embattled cornice. Stone
benches along the side walls with wooden panelling above, inscribed, and dated
1541. ,North doorway with continuous moulded arch and hood-mould with
supporting heads. The south aisle has a base of large square freestone blocks
alternating with flushwork panels; 4 3-light traceried windows; south doorway
with continuous arch. Clerestorey with 12 closely-set 2-light windows to north
and south, 4-centred arched heads with red brick, black knapped flint and
flushwork panels between. Chancel with small priest's door on north and a
projecting turret for the rood stairs; 2 C19 restored 3-light windows in
Perpendicular style on the south side, and a 5-light C19 east window, the
traceried head filled with fragments of medieval stained glass. Interior has
matching nave arcades in 7 bays: fluted octagonal piers, the tops with a small
cusped blank ogee arch to each face; double-chamfered arches. Very fine low-
pitched nave roof in which tie-beams alternate with hammers, making 14 short
bays altogether, the shafts for the hammerbeams and braces going down between
the clerestorey windows. The tie- and hammerbeams all have moulding and 2
rows of brattishing, and in the spandrels of the supporting braces suns in
splendour alternate with stars. Moulded ridge-piece and embattled purlins;
large flowers at the intersections of the main timbers. The matching cornice
also has double brattishing and arched spandrels below decorated with stars.
Tenons at the ends of the hammers show where angels or figures should have
been. The main timbers have traces of colour and patterning. Ornate
octagonal font in Decorated style, strikingly similar to that at St Nicholas,
Rattlesden, Suffolk. Panelled base; each face of the bowl, which is supported
on crowned heads, has a flamboyant ogee arch with droplets; crenellated top;
no cover. Fine rood-screen, said to date from 1441, complete to the coving
and cresting: tall onelight divisions with flamboyant ogee arches; dado has
traceried panels painted alternately in red and dark green. Main interior
fittings date from the restoration of 1878: benches; stone pulpit; reredos
below east window; chancel roof. A few old poppy-head bench ends remain in
the chancel and south aisle. Repaired trefoil-headed piscina in south-east
corner of chancel and another in the south aisle. A considerable amount of
medieval stained and painted glass in the tracery and lights of the east
window. Wall tablets to members of the Hunt family on north and south chancel
walls. At east end of south aisle a medieval sepulchral slab and a few
incised encaustic tiles with faces, similar to those at All Saints,
Icklingham, Suffolk. Medieval iron-bound parish chest. Arms of George III
over south door. Hanging above the nave arcade, a 'Virgin crant' on which
garlands were hung in memory of Mary Boyce, d.1685, aged 20. North and south
aisle roofs each in 14 bays: ogee-moulded main beams, very large plain joists,
brattished cornice.