A Grade I Listed Building in Metfield, Suffolk 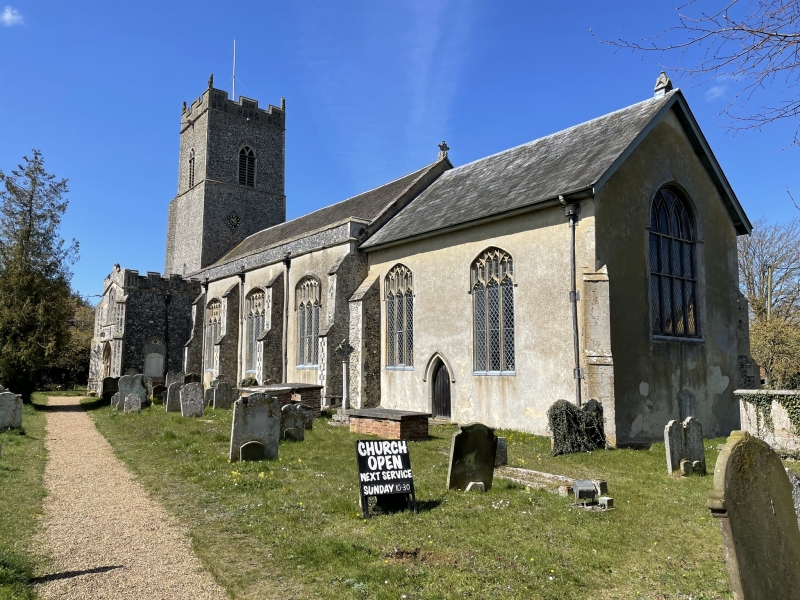 Parish church. Medieval. Nave, chancel, west tower, south porch. Flint
rubble with stone dressings, the nave and chancel plastered. The nave roof is
clad with shingles, the chancel roof slated. Square tower, mainly of C14 date
although the base may be earlier; the crenellated parapet was added in 1712.
the belfy stage, which is slightly narrower, has Y-traceried openings. 4-bay
nave, largely reconstructed in C15 with 2-light and 3-light windows of that
date. Fine early C15 knapped flint porch with flushwork panelling across the
whole facade and a crenellated parapet. Enriched entrance arch and hood
mould, with leaf-carved spandrels; 2 trefoil-headed niches above. Original
wooden lierne vault with carved bosses. Moulded nave doorway with medieval
plank door. Early C14 chancel, heightened and refenestrated in C15; a blocked
Cl4 window is visible inside. C19 wooden east window. Interior. C15 arch-
braced nave roof in 8 bays with a crenellated wallplate (partly renewed) and
arch-bracing beneath the ridge. The east bay is treated as a canopy of honour
and has original painted decoration on boards based on the motifs for Jesus
and Mary. C15 4-bay arch-braced chancel roof with C19 restoration and painted
decoration. In the chancel an early C14 piscina with elongated trefoil arch.
C15 piscina in nave. C15 carved octagonal font with small traces of orignal
colouring: the bowl panels depict alternately lions and angels holding shields
bearing a leopard, derived from the arms of Sir John Jermy who was Lord of the
Manor. Part of the dado of the medieval rood screen is stored at the west end
of the nave: there are traceried panels and some original colouring. C18 west
gallery, enlarged in C19. At the east end of the chancel are C18 framed
copies of the Lord's Prayer-and Creed. Furnishings mainly of c.1900. In the
base of the tower an early C17 turret clock still in use.