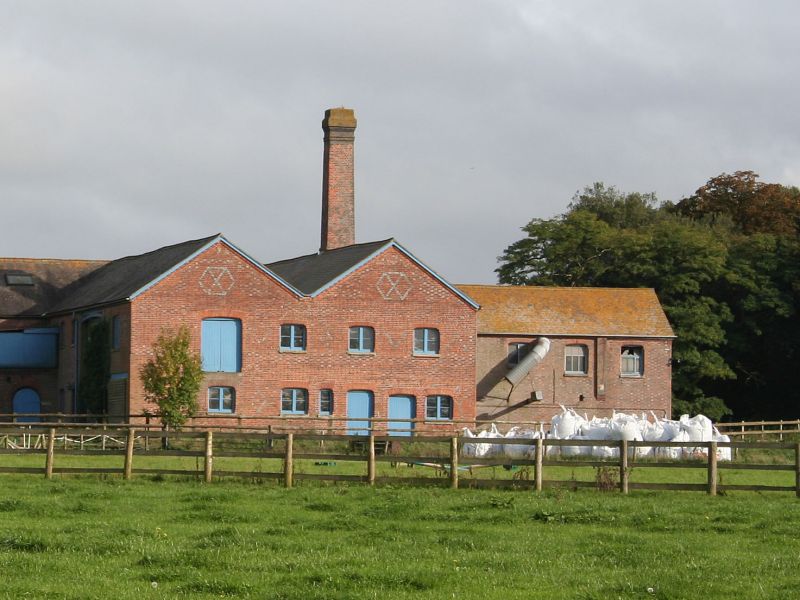 Engine house. Date 1856 on spandrels of covered way, by William Wilkinson for
the Earl of Macclesfield. Flemish bond brick with flared headers and diapering;
double-gabled Welsh slate roof; central ridge stack finished in Engineering
brick. Plan has covered way left of centre with sawing shed and carpenters'
workshop to left and engine room, boiler house, thrashing and chaff-cutting
rooms to right. 2 storeys; 4-window first floor range. Covered way has cast-iron
spandrels under wall plate. Gauged-brick chamfered segmental-arch over
double-entry to left: similar flat-arch over partly blocked entry to right.
Similar segmental-arches over first floor casements. Interior: base and some
driving-wheels and belts survive of steam-driven sawmill to left. Remains of
chaff-cutting and threshing machinery to right include mid C19 twelve
horse-power steam engine by Ruston (name plate). Subsidiary features; buildings
attached to right and making T-plan consist of woolstore/granary over cartsheds
at ends flanking central sheaf room and processing/storage block. Main front (to
right): long 2-storey central block has 3 central gabled bays with chamfered
segmental-arched 2-light casements above central/mid C19 sliding door: similar
sliding doors in long outer bays. Flanking 5 and 4-bay cartsheds have chamfered
archways and chamfered segmental-arches over horizontal sliding sashes; right
gable end has external steps with bell over doorway to granary. There was a
rickyard to the rear of the engine house. Wilkinson designed similar farm
buildings at Longleat, Wiltshire and Kirtlington, north of Oxford. The buildings
at Home Farm were
highly praised, in particular "the several purposes for which steam-power is
made available - viz. for thrashing the corn of the farm, cutting the chaff for
the horses and cattle, crushing oats and beans, grinding corn, drawing water
from a deep well to supply a cistern from which the water is conveyed by iron
piping throughout all parts of the homestead, and also for sawing timber....".
(Illustrated London News, December 12, 1857, pp. 584-5).