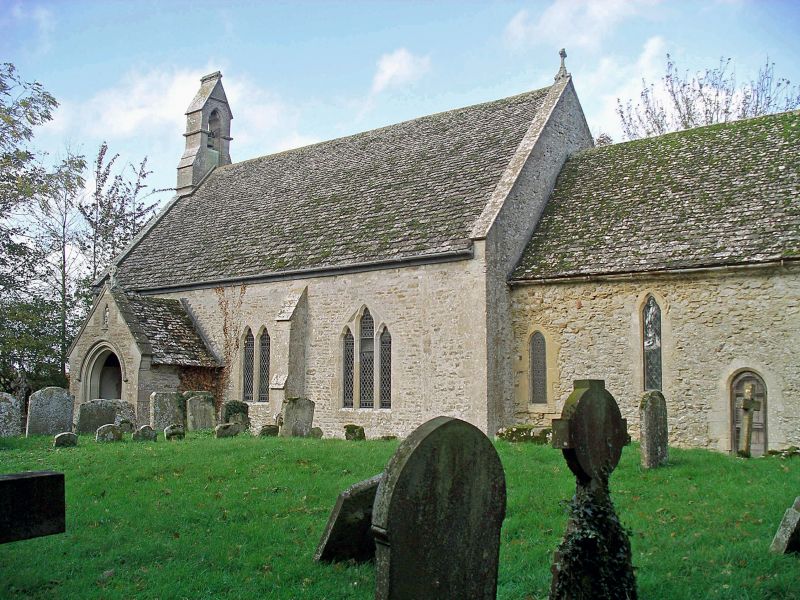 Parish church. Mainly C13 but restored in 1870, 1872 and 1895. Rubble
stone with a gabled stone tiled roof. 3 bay nave, 3-bay chancel, S porch
and W bellcote. 2- and 3-light Early English lancets to S wall of nave,
blocked Norman doorway, one Early English lancet on N wall of nave. W
window of 3 stepped trefoiled lancets with quatrefoils above. Single lancet
windows to N and S walls of chancel, E window of 3 stepped pointed-trefoiled
lights. C19 porch with gabled stone tiled roof and a C13 S doorway with a
rounded-trefoiled head. C19 gabled bellcote. The S aisle has disappeared
leaving an aisleless interior with the remains of an Early English arcade on
the S wall of the nave of plain character. Also an Early English cusped
tomb recess on S wall. Deep splays to the Norman and Early English windows
on N wall. Chancel arch is Transitional with abaci of saltire crosses but a
pointed arch with a slight chamfer. Early English sedilia in the chancel -
a recess with 2 half shafts on heads and with stiff leaf capitals. Also a
trefoil-headed piscina. Open rafter roof throughout with tie beams, queen
posts and tier of wind braces. Fine set of stained glass by Morris & Co:
1874 nave N side, St Matthew with Angel by Edward Burne-Jones; 1877 chancel
N side, Christ walking on the water also by Burne-Jones; 1935 W window, St
Raphael after a design by William Morris, St Michael after a design by Ford
Madox Brown and St Gabriel after another design by Morris. E window by
Clayton and Bell depicting scences from the gospels. Polygonal Jacobean
pulpit with much strapwork and arcading. Font also Jacobean - an octagonal
stone base with octagonal bowl and contemporary wooden cover with a crucifix
supported by 4 brackets.
A C Sewter, The Stained Glass of Williams Morris and his Circle, 1975, 2,
67.