A Grade I Listed Building in Gisleham, Suffolk 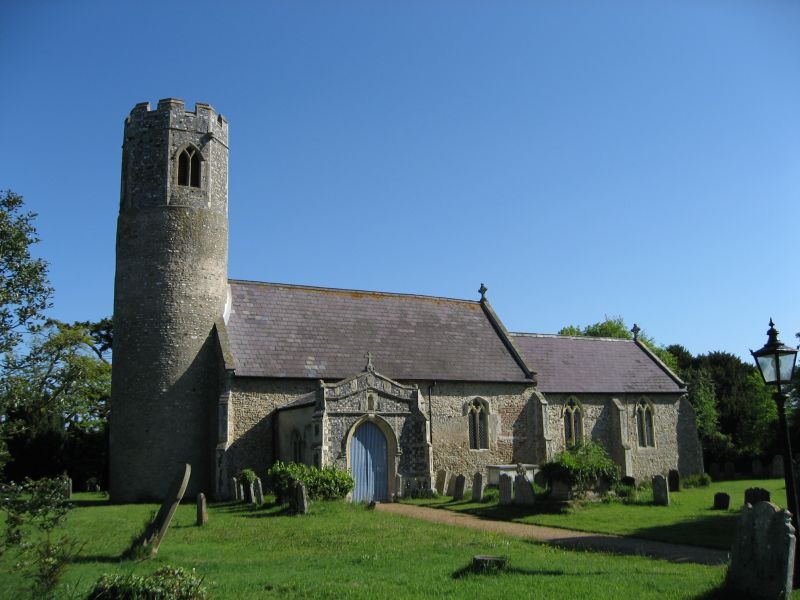 Parish church. Medieval; restored 1861, 1887 and the chancel in 1902-8. Nave,
chancel, west tower, south porch. Flint rubble, originally plastered; stone
dressing. Slated roofs. Round tower of C11 or earlier date; the tower arch
and a blocked east window are C12. C14 octagonal belfry stage and crenellated
parapet, both of knapped flint; there are 2-light belfry openings to 4
quarters, that to the south now altered. C12 nave with C14 2-light windows,
mostly original. To the north is part of a C12 doorway with colonettes and
scalloped capitals. C15 porch, with knapped flint facade and flushwork panels
to the plinth and buttresses; the moulded entrance arch is enriched with
various carved motifs, and above is an empty statue niche with mutilated
flanking angels. The parapet has carved stone shields. 2-bay chancel:
probably C12 core, with C14 window openings; internally the north and south
openings have moulded surrounds, those to the south also being shafted. The
windows have been renewed, including the 3-light east window with reticulated
tracery. Interior. The capitals and part of the responds of the chancel arch
remain, together with the crenellated rood beam, but the chancel has been re-
roofed at a lower level and the upper part of the arch has gone. Early C14
angle piscina (mutilated) in south chancel; adjacent is a drop-sill sedilia,
the seat being formed by an early tomb slab. C15 octagonal font: lions
against the stem, heads and vine foliage to the underside of the bowl and
cusped bowl panels with alternate heads and shields. The 2 easternmost north
nave windows have well-preserved C15 paintings in their eastern reveals; they
show figures of female saints with rays and angels above. To either side of
the tower arch are C19 copies of the Lord's Prayer, Commandments and Creed.