A Grade I Listed Building in Mickfield, Suffolk 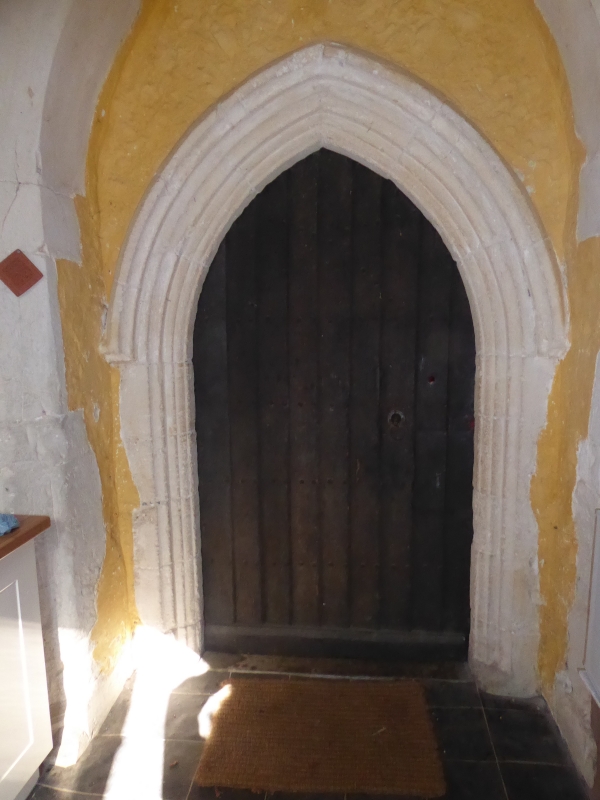 Redundant parish church. Medieval, with major phases of early C14 and early
C16. Nave, chancel and south-west tower/porch. Random flint rubble with
freestone dressings. Chancel roof plaintiled. Nave roof low pitched and
leaded. Parapet gables; the east chancel gable has grotesque carved corbels
possible of early C14. Early C14 tower has a deeply-chamfered doorway and two
cusped porch side windows; also of early C14 is the moulded inner doorway.
The door is original and has a sanctuary ring with a grotesque boss. Other
C14 moulded doorways, to north of nave, and to south of chancel (the latter
has grotesque drips to the hoodmould). Mediaeval camberbeam roof to nave
(possibly late C14, but restored in C19): in 3 bays with chamfered arch braces
to each tiebeam, the wallpieces supported by stone corbels with well-carved
grotesques. Wide C14 chancel arch with piers and moulded capitals. C14 stoup
inside nave doorway. Various detail alterations of c.1500 or early C16:
belfry windows with tracery now fragmentary, and tower parapet of red brick;
2-light windows to nave and chancel, some with restored tracery of C19; a
cusped piscina in the chancel. Early C16 roof to chancel in 2 bays: arch-
braced principals with bracing up to ridge, but entirely without collars. The
arch-braces spring from wall-pieces whose lower sections are polygonal and
have carved capitals; the cornice is moulded and embattled. Mid C14 octagonal
limestone font with simple mouldings. Set of 6 benches of c.1500 now in
chancel, with good poppyhead ends, some having animals or turrets attached to
the buttresses. 9 marble floor slabs in chancel: one to Peter Preston (1616),
wife Thomasin (1617) and son Peter (1631) has had its brass removed, another
is dated 1675; the others C18. A slab in nave with brass to Frances Dade
(1615); another of 1720. The building was in deteriorating condition at date
of survey.