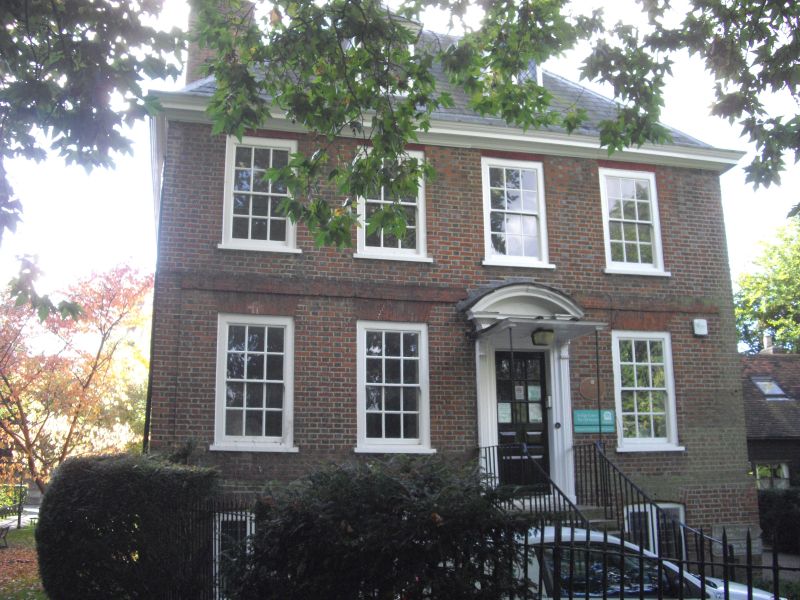 Built circa 1720-30 for William Hollier, Vicar of Carshalton in Queen Anne Style. Some fireplaces are early C19. There is a mid-C19 west extension and a two-storey north porch which are of lesser interest.

Built circa 1720-30 for William Hollier, Vicar of Carshalton in Queen Anne Style. Some fireplaces are of early C19 date. There is a mid-C19 west extension and a two-storey north porch which are of lesser interest.

PLAN: originally a square building of two storeys, attics and basement, of four bays with four rooms to each floor and a staircase near the middle of the north side. The off-centre main entrance originally opened directly into the hall, probably as a waiting room for parishioners, and the north-west ground floor room was probably originally the vicar’s study. This plan was modified in the mid-C19 by the addition of the west extension and a two-storey north porch.

EXTERIOR: the east entrance front is of four bays with a hipped roof with a moulded eaves cornice, and a pair of full dormers with diamond-shaped leaded lights. There are six over six sash windows with rubbed brick heads, and a projecting brick band between floors and plinth. The basement windows are modern replacements. The entrance in the third bay from the left has a wooden doorcase with a segmental head and cornice supported on foliate consoles above fluted pilasters. There is a small later projecting hood. The door is C18 with a later half-glazed insertion, approached up a flight of nine original stone steps with plain iron railings.

The south side original four bays are without windows in the third bay to accommodate a chimneystack with fireplaces. The roof has a large brick dormer with a 12-light casement. There is a band between the floors and plinth. There are two blocked segmental-headed basement openings. The western C19 extension is of two bays with four-light sash windows to each floor and a blocked segmental-headed basement window.

On the north side the original part of the building is of four bays with no windows in the eastern bay to the left. The first floor has a window with square leaded lights below the eaves, and originally there was a larger window below, now obscured by a mid-C19 flat-roofed porch with a three over three sash window over a door. There are two irregularly-spaced horned sash windows to the west of the porch, and a hipped dormer above. The north wall of the mid-C19 extension is of plain brick but there is a narrow tower-like structure in the angle between this and the main building. The north side of it has a small window on the ground floor and a four-light sash above. The west side has a round-headed door with three corbelled out bricks above similar to the porch.

The west side of the original building has a central chimneystack but is mainly covered by the C19 extension which has a casement window to the upper floor and a basement door below it.

INTERIOR: entrance into the ground floor from the east is into the hall which was originally part of the north-west room. This room has an early-C19 black marble or slate fireplace with a cast iron Victorian fire-grate and is panelled with large upper and small lower panels separated by a dado rail and has a cupboard on the west side of the fireplace with a row of iron coat-hooks inside.

The south-east original room has a fireplace in the south-west corner and is panelled with large upper panels and small lower ones separated by a dado rail and window seats. The painted fireplace is probably of white marble. The door between it and the adjoining south-west room has a wide arch.

The original south-west room has a painted fire surround, probably over white marble, probably early C19. A cupboard on the north side of the chimney has a moulded surround but no door.

The original north-west room was later divided with a partition but panelling survives along the south side of the original room and parts of the north and west walls. The fire-place with shelf and brackets is probably early C19.

The Victorian wing has a large south room with black marble fireplace.

The staircase from cellar to attics has turned balusters and a moulded handrail with a half rail and dado panels on the wall.

The first floor original north-east and south-east rooms were amalgamated, the north-east part retaining panelling over the fireplace only and the fireplace has a decorated cast iron basket grate. There is a bolection-moulded fireplace in the southern part.

The south-west room retains almost all its panelling and a fireplace in the centre of the west wall with a bolection-moulded surround and a C19 cast iron fire-grate by Carron Company and two doorcase surrounds, one blocked.

The original north-west room has been subdivided into three with later partitions. The west wall has a blocked fireplace with a plain wooden surround with roll moulding, some panelling above and along the south, north and east sides of the original room.

The Victorian extension has no fittings of note.

In the attics, the north-eastern room has a later cast iron fire-grate. The roof timbers are partially hidden by the plaster ceiling but side purlins and collars are visible. There is a visible carpenter’s mark on a common rafter on the north side of the roof.

In the basement, the south-west room of the original part has a bridging joist and cross-beam and an original fireplace which was tiled in the Victorian period, probably for a cooking range.

The north-east room has a cupboards with reused doors with ventilation holes and old hinges.

The north-west room has a niche with a sandstone slab shelf.

The Victorian basement was built over a pre-existing well.

The Old Rectory was probably built about 1720-30 for William Hollier, Vicar of Carshalton between 1703 and 1737. The earliest reference to the building is in the will of his widow Elizabeth Hollier dated 25 March 1749. In 1828 the advowson was bought by the Cator family of Beckenham Park and the next rector, who was a family member appointed in 1827, moved to a property in the High Street. As a result the former rectory became tenanted after this date.

Between the Tithe map of 1847 and the first 25’’ Ordnance Survey map of 1868 an extension was added to the west side of the building and a two-storey porch to the north, probably for John Holman Hay, a clerk in the Admiralty. In the early C20 it was the home of a timber merchant W J Mallinson.

In about 1920 it became the Southwark Diocesan House and was used as The College of St Saviour from about 1932. Carshalton Urban District Council bought both The Old Rectory and The Lodge between 1938 and 1943. The Old Rectory was statutorily listed at Grade II in 1954.

The Old Rectory, Carshalton, of about 1720-30 with a mid C19 extension, is listed at Grade II* for the following principal reasons:

Architectural interest:
* for its little altered early C18 exterior and fine substantially intact original interior, including staircase, panelling, cupboards and fireplaces;
* for its unusual asymmetrical main front and plan including entrance directly into the hall and vicar's study.

Group value:
* as part of a large group of listed buildings in Carshalton including Gate House, Honeywood, The Greyhound PH, Carshalton War Memorial and the Church of All Saints.