A Grade I Listed Building in Kirkburton, Kirklees 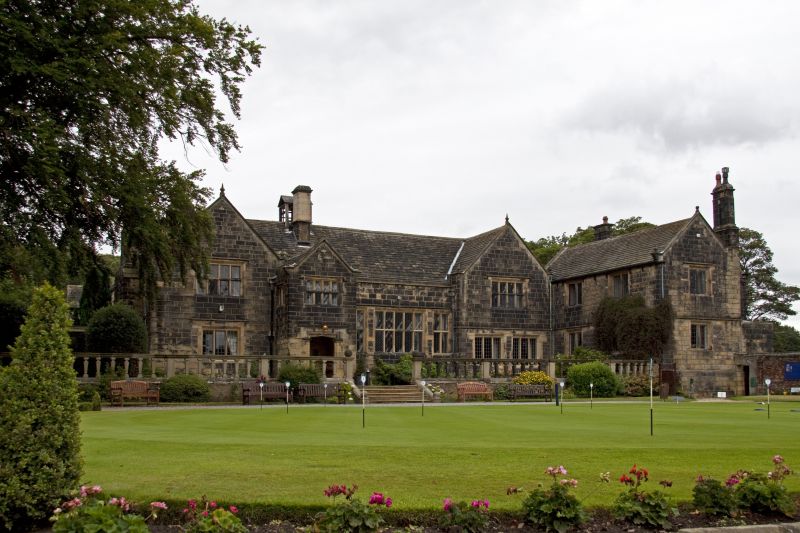 Extremely fine hall house, with additions, now golf club house. Built
in stages for four generations of the Kaye family, Arthur, John I,
Robert and John II between the early C16 and the mid C17.
Ashlar stone slate roof.Two storeys.The main range containing the
hall faces east, and overlooks the terrace. To the right and rear are
2 later blocks one being L-shaped. To the rear left is another L-shaped
range enclosing the courtyard at the rear of the hall. Details include
double hollow chamfered windows, hollow chamfered gable copings on moulded
kneelers, pointed finials, projecting chimney breasts with ashlar stacks
with moulded caps, and lead guttering, fall pipes and rainwater heads,
many with the motif of a finch and one is dated 1774.

The hall range has a gabled wing to each side and a 2-storey gabled porch.
10-light hall window with transom, and cross window to each side. 8-light
window with transom to 1st floor of porch and 1st floor of each gabled
wing. Moulded door surround with imposts and moulded Tudor arched lintel
dated 1600. The inner doorway is similar with early oak door. The later
wing to the right, projects for 2 bays and has 2-light windows. A further
addition at 90° to this. To the rear, right of the hall range, and at 90°,
is a 3-gabled 2½ storey range, whose main facade looks into the courtyard.
The left two gables are symmetrical with central Tudor arched doorway and
5-light window to each side. Above these, to 1st floor are two 10-light
windows with transom and a central cross-window lighting a fine 1st floor
chamber with very fine plaster frieze with alternate motifs of affronted
wyverns, and a merman holding hands with mermaid to each side. Also, in
the centre, the Kaye arms. To the rear of this block,external stack to
each of the 3 gables, with paired diagonal ashlar stacks. The south
range, to the rear left of the hall range, is mainly altered. This range
is now entirely of stone but straight joints suggest that the upper floor
may once have been of another material. The west range has square cut
windows to the west, but the courtyard side of this range has a colonade
of short Tuscan columns which may be early C17. The courtyard has a
round pond with fountain dated 1857. Early oak door from courtyard into
south range.

Interior: The hall range has through passage to courtyard with hall on
right. The hall is open with timber posts with arched braces which can
still be seen. The broad fireplace, backing onto the passage, has moulded
surround and stone seats. Stone corbels support a massive bressumer
whose front is carved with raised letters: ARTHUR KAY BIATRIX KAY with
a Tudor rose and a fleur-de-lys as stops and a central Kaye shield. Oak
panelling. Gallery to rear with turned balusters and elaborately carved
frieze. Carved oak clock dated 1652. Two windows at high level from
a ladies' chamber. The parlour to right is oak panelled and has
elaborately plastered beam soffits with vines and grapes. Several
good fireplaces. Open oak staircase to rear with turned balusters, and
in this area further evidence of timber posting.

The paved terrace has tapering, fluted balusters with stone rail and ball
finials and has small flight of stone steps.

The first recorded dweller at Woodsome is thought to be Gilbert de Notton,
1236. The Tyas family lived there until 1370, when the manor was granted
to Sir William Finchenden, (the finch motif comes from this family). The
Kayes occupied Woodsome from 1378 to 1726 when Sir Arthur Kaye died. His
daughter married George Legge, Viscount Lewisham eldest son of the Earl of
Dartmouth. This family occupied the house until 1911.