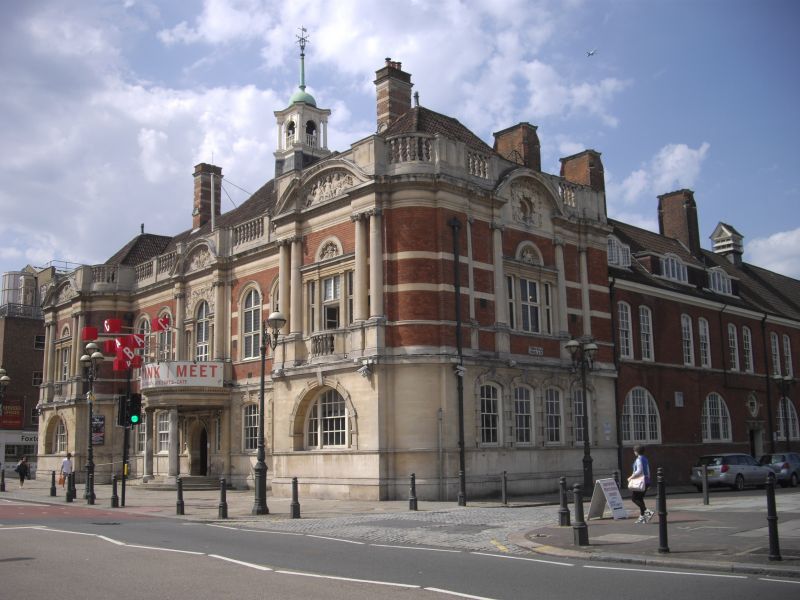 PLAN: The building occupies a long, steeply-sloping site. S frontage block of 2 storeys containing principal civic rooms, a large central stair hall, and a pair of lower, parallel 2-storey wings to rear, each with series of offices alongside corridor. A single-storey link block contains the entrance and lobby to the public hall, plus a reception room to W Hall is set at slight angle to main building, with corridors along either side in lower aisles; stage in lower block at N end with stairs to either side. Lower Hall and service areas beneath.

EXTERIOR: Symmetrical front block in free Classical style comprising 5 central bays flanked by single-bay square pavilions with rounded angles. Façade largely in stone with banding to red-brick first floor. Semi-circular Ionic portico with dentilled cornice and balustraded parapet; central panel inscribed 'MUNICIPAL BUILDINGS'. Round-arched main entrance with carved putti in spandrels. Segmental-arched ground-floor windows with Gibbs surrounds; Diocletian windows to end bays. Central and end bays of first floor have Serlian windows framed in Ionic columns (those to end bays paired), with balconies below; remainder are round-headed. Central and end bays have shaped pediments with relief sculpture depicting, to E: the young borough supported by Labour and Progress; to W: the young borough instructed by Art and Literature, and in the centre the Battersea parish crest and coat of arms supported by figures of Justice and Prudence; in the spandrel of the central window are figures of 'Authority' and 'Relaxation'. E and W returns have first-floor Serlian windows framed by pilasters; shaped pediments have keyed oculi enriched with scrolls and busts. Pulvinated frieze with egg-and-dart cornice, balustraded parapet. Square-pane sashes to ground floor; mullion and transom casements to first with leaded lights. Hipped roofs; that above central bay slightly raised and surmounted by timber Ionic cupola on lead base with copper dome and weather vane.

E and W elevations to rear wings differ (the W having been raised from 1 to 2 storeys in 1899-1901). E elevation has Diocletian windows to ground floor and paired segmental-headed sash windows to first floor and basement. 2 entrances with Gibbs surrounds and oculi above. Segmental-headed dormers with tile hanging. Oriel window to the NE angle of gable. Tall moulded stacks. W elevation has similar fenestration with paired entrances to N; bracketed eaves cornice and shorter stacks.

Link block has entrance lobby on E side, leading through a set of glazed timber doors with transom lights into octagonal vestibule covered by cast-iron framed dome with stained-glass panels decorated with Renaissance motifs in yellow and brown (restored 1999). This is carried on a stone arcade with marble columns; plaster frieze of oak and vine leaves carries gilded quotation from Richard III: 'The purest treasure mortal times afford / Is spotless reputation: that away / Men are but gilded loam, or painted clay. / Mine honour is my life; both grow in one'. Ornate mosaic floor. Two full-size plaster maquettes of sculptures by William Calder Marshall: Zephyr and Aurora, and Dancing Girl Reposing, installed 1894; a third, Eurydice, was relocated to Wandsworth Town Hall. Door surrounds to hall and reception room with shaped pediments and lugged architraves. Reception room has roof lantern carried on deep coved frieze with strapwork decoration.

Public hall has segmental barrel-vaulted ceiling with elaborate neo-Jacobean strapwork. Balcony with concave timber-panelled front enlarged 1936. Proscenium arch and spandrels to window arches enriched with scrolls and putti. Organ designed by Robert Hope-Jones, the creator of the theatre organ, then working for Norman & Beard, installed 1900. This is in a handsome Baroque-style oak case of five sections (two either side of the proscenium arch and stage and one at rear of the stage), designed by Pilditch. Lower hall, remodelled in 1926, has ceiling with full-width plastered girders decorated with borough motif, carried on square piers embellished with neo-Grec plasterwork, designed by Henry Hyams, assistant borough surveyor.

HISTORY
Until the late C19, London's local government operated under the parish vestry system. The first London-wide authority to take charge of infrastructure was the Metropolitan Board of Works (MBW), established in 1855, under whose aegis some of the less-populous parishes were amalgamated under district boards of works (DBWs). The semi-rural parish of St Mary Battersea had thus come under the jurisdiction of the Wandsworth DBW, but the area rapidly transformed into a dense urban agglomeration and industrial centre and in 1888 the Vestry was reconstituted as the single local authority.

The fragmentary nature of London's local government in the mid C19 meant that its municipal buildings were modest in comparison to some of the monumental town halls being built in provincial cities such as Leeds and Manchester, but as certain vestries achieved a greater civic consciousness, a series of more ambitious vestry halls emerged, and Battersea belongs to this later generation of 'reformed' vestries. In 1891 the Vestry held a limited architectural competition to design a town hall. The selected entry was by Edward William Mountford (1855-1908) who lived locally and had designed several public buildings, including Battersea Polytechnic, Battersea Public Library, and Sheffield Town Hall, and went on to design the Old Bailey (1900-7). The foundation stone was laid in November 1892 and the building was opened in November 1893 by Lord Rosebery, Chairman of the LCC.

The London County Council (LCC) was formed in 1889 to govern the former MBW area, and the London Government Act (1899) created 28 metropolitan boroughs. Battersea had emerged as a hub of radical politics in the 1880s under the labour activist John Burns, who was elected as the LCC member for Battersea in 1890 and Independent Labour MP for Battersea North in 1892. The Metropolitan Borough of Battersea's first council election of 1900 was won by the Progressive Party (the centre-left local-government party founded in 1888 with a majority on the LCC), and the Labour Party gained control in 1919. In 1906 Battersea elected Britain's first black councillor, John Archer (1863-1932), who became mayor in 1913. In his acceptance speech, Archer said 'Battersea has done many things in the past, but the greatest thing it has done is to show that it has no racial prejudice, and that it recognises a man for the work he has done'.

The Borough of Battersea ceased to exist in 1965 when the LCC was superseded by the Greater London Council, and Battersea and Wandsworth were merged as the London Borough of Wandsworth. Battersea Town Hall was saved from demolition through a public campaign, and was acquired on a lease by Battersea Arts Centre in 1981.

REASONS FOR DESIGNATION
Battersea Arts Centre, formerly Battersea Town Hall, is listed Grade II* for the following principal reasons:
* Architectural interest: a handsome and well-preserved example of late-C19 municipal architecture with extensive relief sculpture and decorative treatment
* Designer: a notable work by EW Mountford, a distinguished figure in late Victorian/Edwardian civic architecture
* Interiors: for the survival of elaborate public rooms, in particular the monumental stair hall, council chamber, octagonal lobby and public hall
* Historic interest: it illustrates the transformation of London's antiquated vestry system into modern local government, and is one the most ambitious manifestations of this new-found civic pride and local identity; also as the seat of one of London's leading Progressive authorities, where Britain's first black Mayor, John Archer, was elected in 1913.