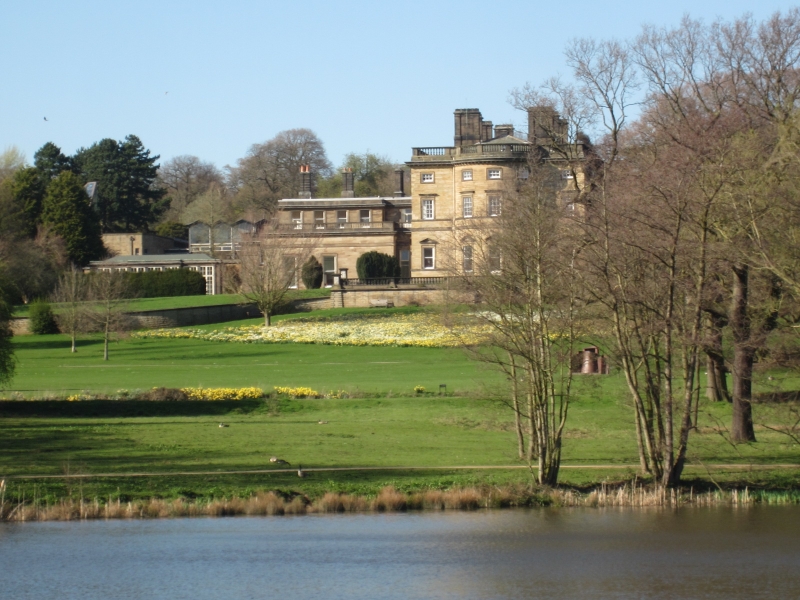 Large country house, now college. Circa 1720, 1780s, 1811-14 and c.1852.
The south range c.1720 by Sir William Wentworth and Col. James Moyser for Sir
William Wentworth himself. The north range 1780s by William Lindley of
Doncaster, the linking block and remodelling of the south range (ie the south
bow and the east portico) 1811-14 by Jeffry Wyatt for Col. Thomas Richard and
Diana Beaumont, the projecting dining room on the east front added c.1852
probably by Thomas Richardson for Thomas Blackett Beaumont. Ashlar, the roof
hidden behind parapet. 9-bay by 5-bay main, south range with a 3-bay link
block to north which extends westwards and terminates in the orangery, and a
7-bay north range. The main elevations face east. 3-storey main range, the
rest 2 storeys. The south range: symmetrical front with central, Greek Doric
tetrastyle portico, 12-pane ground and 1st-floor sashes, the former with
triangular pediments, the latter with small cornices. Short 2nd floor
windows with later casements. Plinth and bands to lower floors. Two
ornamental rainwater heads bearing the Wentworth shield. Modillion eaves
cornice, and balustraded parapet. Eight tall, broad, symmetrically placed
ashlar ornamental stacks. The south front has a 3-bay bow which has taller
ground-floor windows the centre one formerly a doorway up 4 steps. The rear
is similar to the front but more plain. The link block to the north is in
keeping but with taller ground-floor windows and is separated by a recessed
single bay. The north range: symmetrical front, the centre 3 bays marked by
giant pilasters which support a pediment. Central, 8-panel double door, 12-
pane sashes to ground floor 9-pane sashes to 1st floor. Frieze, cornice and
blocking course. The tympanum has an enriched shield with the motto "FIDE
SED CUI VIDE". The orangery at the rear, on a 2-step podium, is of 7 bays,
the centre 3 breaking forward slightly, divided by square Tuscan piers
supporting the frieze, moulded cornice and blocking course.
Interior of south range: the entrance hall has a groin vaulted passage at the
rear separated by 3 arches and the piers and walls have grisaille paintings
of figures and trophies. The main staircase to the north of the hall has a
fine wrought-iron handrail of 1920. To the west of this is the former
billiard room and to east (front) the former breakfast room, both with Adam-
style ceilings of c.1770.
Interior of link range: excellent entrance vestibule with 4 piers (apparently
encased cast-iron) supporting a glazed dome on pendentives. The walls are
painted with C18-style Italianate architectural fantasies. The vestibule
opens, at upper level, onto the half-landing of the main staircase (south
range) whose walls have similar paintings. To the west of the vestibule is
the former drawing room or tapestry room, with a heavy baroque ceiling with
pendant bosses probably of c.1852. To the far west is the former library and
the music room both in Regency style of c.1811-14. The latter has an apse
for an organ and a delicate gently coved ceiling with rinceau decoration,
panels, pilaster strips and a delicate marble fireplace with a huge mirror.
The library is mainly altered. To the east of the vestibule is the former
dining room (now conference room) in a heavy Rococo style of c.1852. The end
walls are divided into 3 by Composite pilasters with a niche to each side and
a central panel. Very elaborate marble fireplace decorated with vines and a
central eagle with spread wings. Elaborate frieze with foliage, animals and
Classical figures. The ceiling has panels with musical instruments.
The buildings became used as Bretton College in 1947.
N. Pevsner. The Buildings of England. 1967.
D. Linstrum. West Yorkshire Architects and Architecture. 1978.
Bretton College Archive.
Country Life. May 21st 1938 p.530, May 28th 1938 p.554.