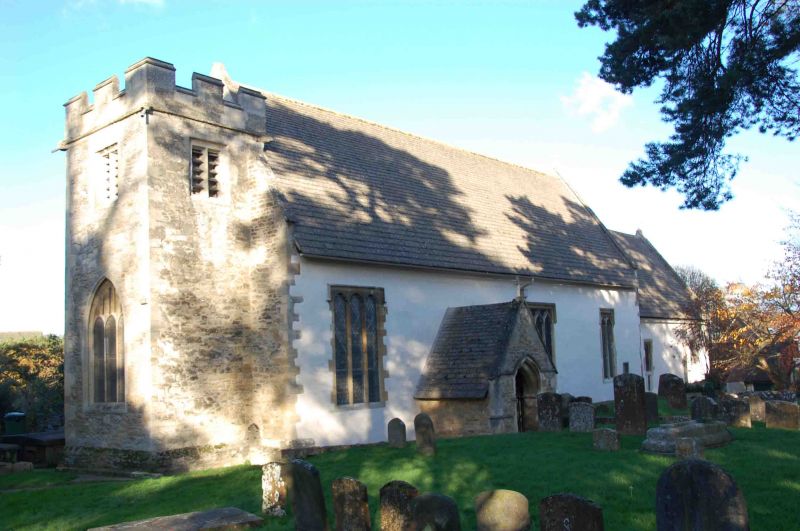 Parish church. Mid C12, C13, and 1862-5 work by G.E. Street. Stone (part rendered), tile and slate roof.
PLAN: Chancel, nave, south porch, north aisle and Lady Chapel (formerly vestry).
EXTERIOR: The church comprises a late C12 nave with north (reset: slightly chamfered arch) and south (also reset: one order of columns with scallop capitals and with a roll-moulding) and chancel arch (with possibly C13 painted lozenge and spiral decoration) of this date. The chancel with three stepped lancet lights is C13, as are the two south and one north square-headed lights to the chancel and the three dwarf buttresses supporting the east wall. Three windows in the south wall of the nave are C14, the low west tower C15. In 1864-5 G.E. Street added an arcaded north aisle in the Early English style with dogtooth in the abici of the arcade piers (the arcade extending alongside the chancel as a two-storey vestry, later refurbished as the Lady Chapel) in which the C12 door was reset. At the same time the church underwent a general refurbishment, during which the south porch was rebuilt and the roof renewed.
INTERIOR: Internally fittings and furnishings include a C12 or C13 tub font; C13 piscina with shouldered lintel; marble reredos of 1862-3; stalls and pulpit by Street. The Norman columns at the chancel arch retain their original paint, with spirals on one and lozenges on the other; this being a rare surviving illustration of interior decorative schemes. Entirely occupying the west end of the nave is a C19 organ removed here in 1896 from Carfax church and repainted in the mid C20 in a gold and red 'medieval' colour scheme.
HISTORY: The Church of St. James, parish church of Cowley village, came to Osney Abbey in 1149, and the remaining Norman elements may date from soon after that. As Cowley was industrialised and expanded in the mid C19 the previously small congregation grew with it, and in 1862-5 the church was almost wholly rebuilt by G.E. Street.

Summary of Importance:
The Church of St. James is a substantially intact medieval parish church, with substantial work of the C12, C13, C14, and C15. Especially notable is the C12 chancel arch with its probably C13 painted decoration. The medieval fabric is complemented by G.E. Street's mid C19 work, and the church altogether merits this high grade.