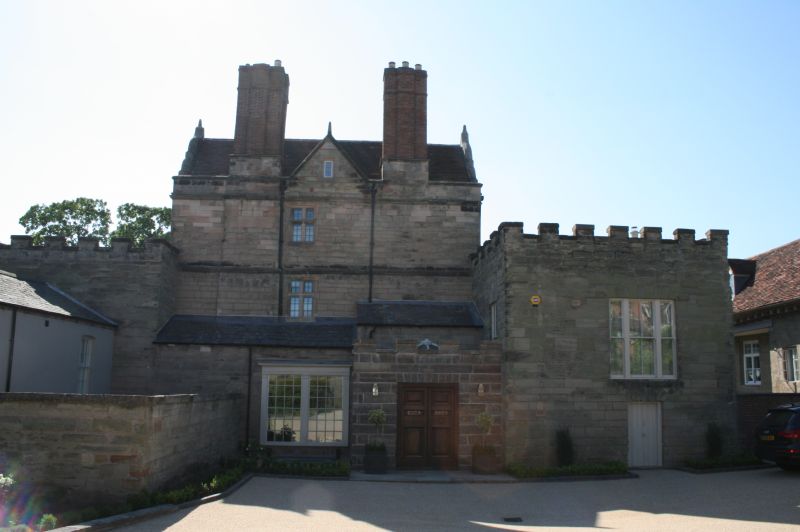 2.
Early C17. Probably built by Richard Yardley. House a good example of
the period and of considerable local historical interest. Francis Smith's
builder's yard is thought to have been situated here: it is referred to
in his will as "my Marble Yard." Additions in 1812 by William Parkes,
who was one of the early industrialists of Warwick. The house is of local
ashlar sandstone and the main elevation faces west. Centre 4 storey plus
attic portion is two bays wide and has geometrical twin gable-heads having
two-light mullioned windows with hood moulds over. The other storeys have
slightly projecting splayed 4 storey bay windows with side mullions of
tone; sashes or casements have been inserted later, some having centre
vertical glazing bars only. Central projecting 3 storey porch has plain
semi-circular-headed entrance with 2 storey oriel window over and geometrical
gable head. Label moulds at all floor levels. These features are repeated
on all four sides of the centre block, but the lower storeys have been
obscured by later additions on all sides except the west. Attractive gabled
roofs of old tiles. The early C19 2 storey side wings are also of ashlar.
These have flat roofs, crenellated parapets and sashes in plain reveals
with vertical glazing bars only. Except for a few small properties of
some historical interest the approach to Marble House and its immediate
surroundings are not noteworthy, but to the west and south west there is
a delightful, view over unspoilt countryside. Modern alterations to exterior:
4 windows to front and side, 2 to back, restored to stone mullion and transom
casements. Interior: fine panelled ground floor room with marble chimney
surround, overmantel with carved pilasters and frieze.
VCH, viii, p.436.