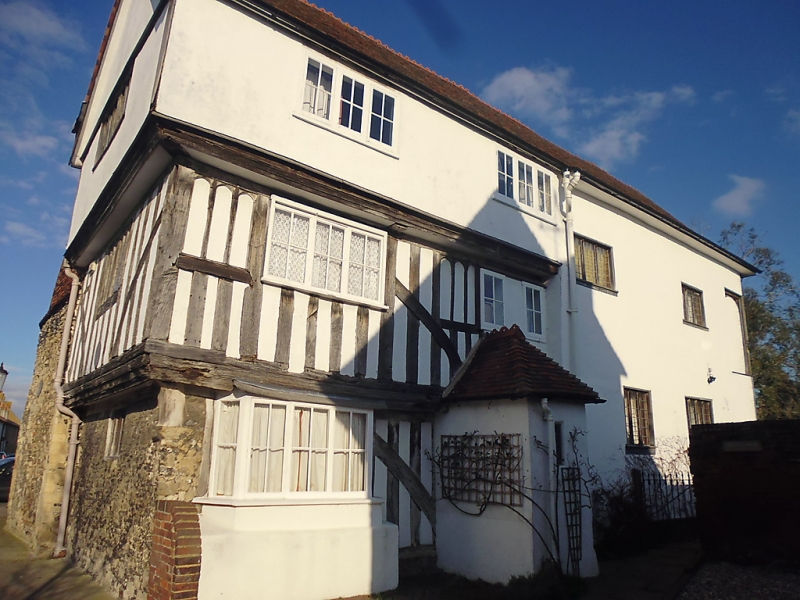 2.
This building was the Guest house of Faversham Abbey and adjoins the
outer gatehouse, which had an arch across what is now Abbey Street.
It is built in 2 sections. The back section, which is only of 2
storeys and 1 window, is of stone rubble, presumably medieval, with a
slate roof. The main part faces South. This is a timber-framed
building, probably C15, both higher and of wider elevation than the
back section. 3 storeys. 4 windows. Faced with plaster but with
close-studding exposed on 1st floor. Tiled roof. It is divided into
2 portions. The west portion is studded and overhangs on a bressummer
on the 1st and 2nd floors on both its South and West fronts. The East
portion is all flush. Casement windows. Small porch with hipped
tiled roof in the centre, but its doorway now blocked up. To the
East of porch modern wooden boarded door. On North wall of this
building, where it extends beyond the back section, is a massive
brick chimney breast now truncated. Photograph in NMR. The house
was the scene of the famous murder of Thomas Ardene in 1550, which was
depicted in the play "Arden of Faversham" of 1592, written by Lillo and
sometimes attributed by local patriotism to Shakespeare. AM.

No 80 and 81 and Wall enclosing garden behind No 8O form a group.