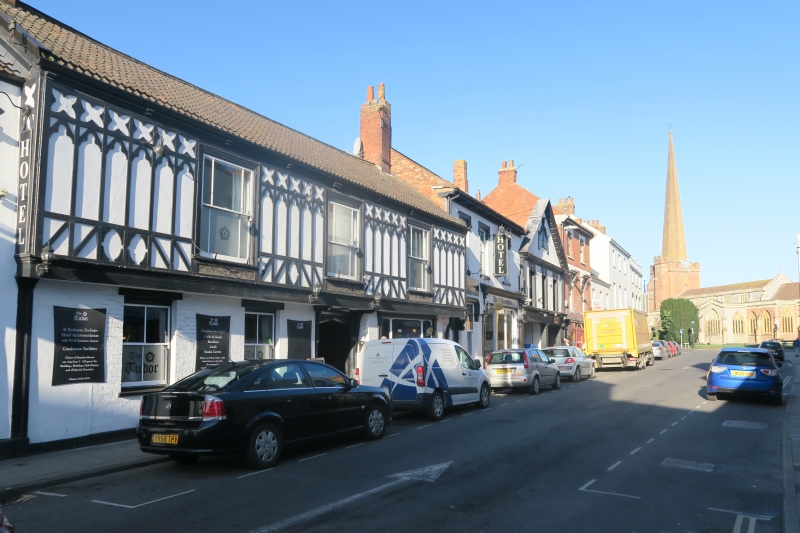 Hotel. Late C16 or early C17. Refronted and extended in early
C19. Applied timber-framing, probably c1920, over stucco to
first floor, painted brick and stone to the ground floor;
brick rear left wing; zig-zag pantile roof with brick stacks
to gable ends.
Originally 3-roomed L-shaped plan with rear courtyard, now
built over; early C19 rear left wing making U-plan.
2 storeys; 3-window range. The symmetrical first floor is
jettied and has three C19 horned sash windows with margin
panes articulated by a pattern of 5 timber trefoil-headed
panels with quatrefoils above and diagonals below. Beneath the
windows are horizontal ornamented terracotta panels.
The brick ground floor has 2 late C19 horned 2/2-pane sash
windows to left, a c1600 oak door to right of centre, a C20
leaded shop window to right flanked by C19 panelled pilasters.
To the far right the wall steps back to the original line, and
has painted coursed rubblestone corbelling out to original
line of jetty.
The studded Tudor-arched door is very wide with strap hinges
behind hollow moulding to 7 vertical panels; the rear of it
has heavy horizontal planks, a wrought-iron bolt and lock. The
Tudor-arched architrave is chamfered and stopped above C19
base cladding and a bootscraper to right. Moulded brackets
support the jetty.
INTERIOR: C18 and C19 panelled doors. The 2 front rooms are
divided by a through-passage angled to the left at the end,
the pattern of C17 plasterwork to ceiling is irregular and
without a border, suggesting that it has been repositioned.
Room to left has a hollow-chamfered lateral beam, now with C20
central support, and open fireplace with herringbone tiling to
the back.
Room to right is fully panelled, mostly with reset c1600 work.
It has a small cornice below frieze of horizontal panels
articulated by short pilasters, all below a deeper wooden
cornice and plaster frieze of undulating fronds with fruit and
flowers, heavily painted. Hollow-moulded beams to the
quartered ceiling separate moulded geometric panels of
8-pointed stars with borders and large fleurs-de-lys in
various panels, all mostly late C19. The flat-arched open
fireplace to right has 3 ovolo mouldings to the intrados
stopped at the base, and a C19 overmantel.
The wing to rear right, angled to left, has late C16 or C17
ovolo-moulded 4-light first-floor window to former courtyard
and open fire on right-hand angled wall with C19 overmantel
and late C16 or C17 stop-chamfered bressumer and jambs; the
room above has a Tudor-arched fireplace with sunk spandrels
using the same stack.
The roof structure remains inside the C19 wider frame, and has
late C16 or early C17 collar and queen-post trusses with butt
purlins and mortices for wind-braces. It is probably of elm,
collar braced with massive principle rafters and trenched
purlins. Roof in rear right wing not accessible but noted as
having substantial principal rafters. Early C19 collar-truss
roof in rear left wing.