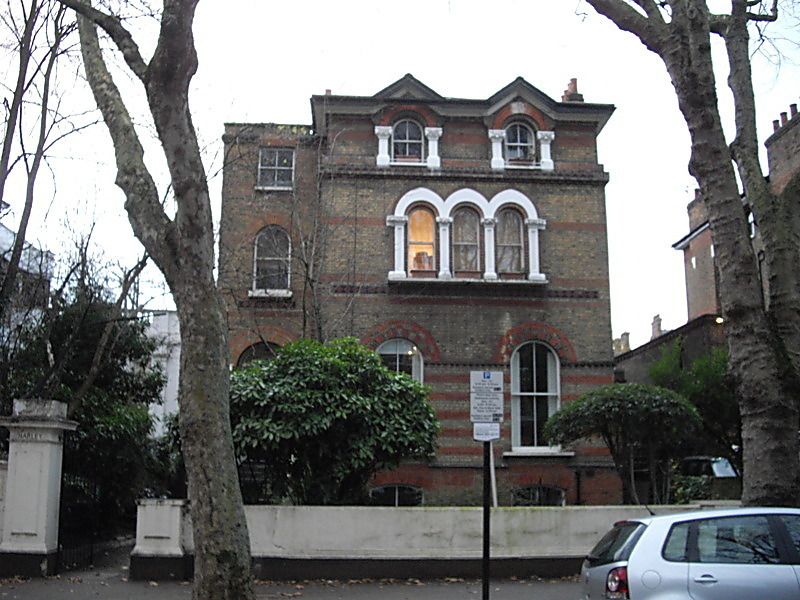 Detached house. 1856-61. Developed by Henry Rydon and probably
designed by Charles Hambridge. Yellow brick set in Flemish
bond with dressings of red brick, stucco and tile, roof of
slate. Three storeys over basement, four-window range. Steps
up to round-arched entrance in recessed left-hand wing of
one-window range: entrance with moulded stucco architrave,
cornice, fanlight and panelled door of original design under a
round-arched porch with head of alternating red and yellow
brick. The ground floor has red and yellow brick alternating
in bands of three courses each up to an impost band of bricks
set at an angle; ground-floor windows round-arched with heads
of alternating red and yellow brick; first-floor windows
round-arched, those to the main front grouped as three, deeply
recessed and set under a round-arched stucco arcade of
panelled pilasters, foliage capitals and unmoulded archivolt
with pointed extrados; band of encaustic tiles below
first-floor windows; sill band of dentilled brickwork and
encaustic tiles to second-floor windows which are round-arched
to the main front and detailed as on the first floor under two
small gables; second-floor window in entrance wing altered to
a flat arch; cornice of dentilled brickwork and wooden
moulding to boxed eaves; hipped roof to main front; side
stacks.
(London Journal: T.F.M.Hinchcliffe: 'Highbury New Park. A
nineteenth-century middle-class suburb': London: 1981-:
29-44).