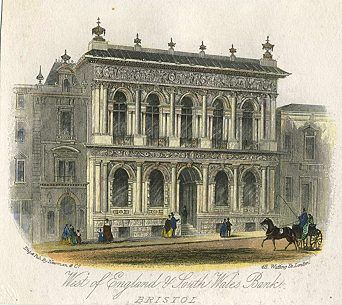 Bank. 1854-58. By WB Gingell and TR Lysaght, extended early
C20. Bath and Portland ashlar, roof not visible. Italian
Palazzo style. 2 storeys; 6-window range.
A regular, richly decorated front has relief carving to
spandrels and friezes, Portland left-hand C20 entrance bay, a
banded, vermiculated plinth, deep ground-floor sill band,
attached ground-floor Tuscan columns to an entablature with
frieze and modillion cornice, first-floor plinths to attached
Ionic columns, paired over the entrance, to a larger
entablature and a blocking course.
Large left-hand doorway set back between pilaster jambs with a
plate-glass overlight in a semicircular arch with acanthus
architrave and carved head key, 53 and 55 inscribed in round
spandrel panels and large acanthus consoles each side to the
entablature broken forward; urns on pedestals above.
Semicircular-arched ground-floor windows have blocked Ionic
columns to a pulvinated frieze and cornice with a bay-leaf
archivolt, set back from pilaster jambs in an outer arch with
a key of bearded biblical heads; reclining allegorical figures
in the spandrels, and frieze above of garlands, cartouches and
horses.
First-floor Venetian windows with swagged Ionic capitals and
pulvinated friezes, cast-iron railings on the cills, with
curved rails and finials, reclining female figures in the
spandrels, carved keys of ships' prows and volutes, and a
Portland frieze of children with symbols of trade and
industry, and cartouches.
Top cornice has fish heads, blocking course has large square
urns at the ends and doorway. Plate-glass windows.
INTERIOR: lobby with a hemispherical roof, Corinthian columns
to a curved entablature, a semicircular arch with steps up and
coffered soffit, and a flight of stairs to the left with
square balusters; the banking hall is 6x5 bays articulated by
paired Composite columns to an entablature set forward,
semicircular arches round the side to a modillion cornice,
coved ceiling beams with guilloche and a glazed ceiling;
architraves betweeen the columns, with porches to each end on
the W side with pilasters to an entablature; offices to the
front have coffered ceilings, the former entrance leads to a
circular, domed hall with paired attached columns to an arch,
3 doorways with carved consoles with festoon and lion heads to
bay-leaf friezes and dentil cornice all round.
Gingell was a noted designer of banks, and this is one of the
finest compositions of its type in the country. Modelled on
Sansovino's St Mark's Library in Venice. Thomas probably did
little of the carving as he was then working on the Houses of
Parliament. Cleaned and restored 1974. On the site of the Bush
Tavern visited by Mr Pickwick.
(Gomme A, Jenner M and Little B: Bristol, An Architectural
History: Bristol: 1979-: 351; City of Bristol: City Engineer's
Building Grant Plans: Bristol: 1851-: FOL 46; The Buildings of
England: Pevsner N: North Somerset and Bristol: London: 1958-:
424).