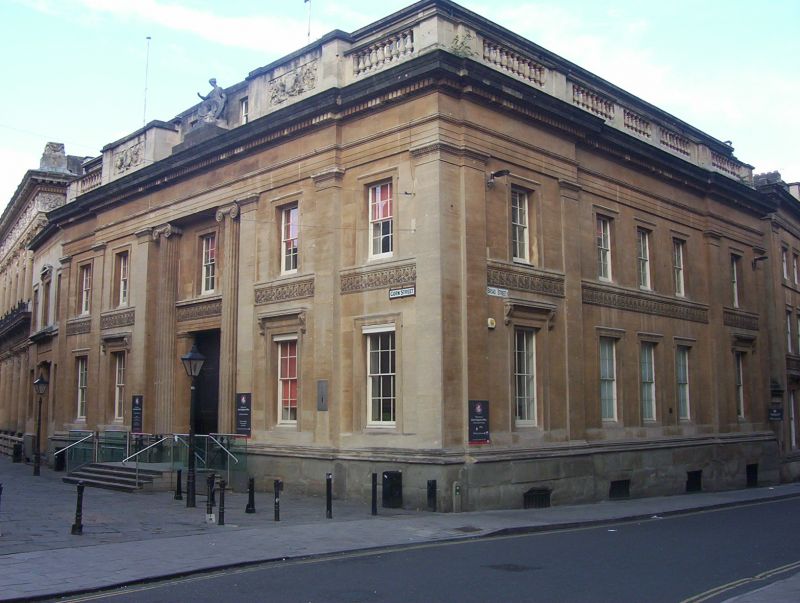 Council chamber and treasurer's office, now courts. 1824-27.
By Sir Robert Smirke. Sculpture by EH Baily. Extended 1828 by
RS Pope and G Dymock. Limestone ashlar with Pennant ashlar
plinth, roof not visible. Neoclassical style. 2 storeys, attic
and basement; 5-window range, with a 2-storey; 3-window
left-hand extension.
The Council House is symmetrical with a plinth to a moulded
band, articulated above by giant pilasters to an entablature
with dentil cornice, the end window sections set back, and the
centre recessed between giant fluted Ionic columns; a mid C20
attic storey behind outer balustrades, tall panelled parapets
and recessed centre with a statue of Justice holding a spear
on a wide plinth.
Steps up to a large doorway with pilaster jambs to an
entablature, 2-leaf doors with 6 flush panels with roundels;
the windows have battered eared architraves, console cornices
to the inner ground-floor windows, with recessed cills, to
6/6-pane sashes. Between the pilasters is a first-floor sill
band with raised stylised leaves.
Parapet sections flanking the centre have raised heraldic
panels, and 2 attic windows flank the statue. Mid C20 attic
storey extended behind the balustrade. The right return has a
symmetrical 5-window range with end sections set forward
between pilasters, articulated as the front with first-floor
band, console cornices to the outer first-floor windows, and a
balustrade with dies. 4 low basement windows have 8/8-pane
sashes.
The former Treasurer's Office is symmetrical with a plinth,
recessed cills, first-floor plat band, cornice and blocking
course. Distyle Greek Doric columns to the entrance, with an
entablature with triglyphs and cornice to a recessed doorway,
now a window with ashlar panel beneath the cill; ground-floor
windows have torus mouldings, architraves above with console
cornice to the middle, and 6/6-pane sashes. Low basement
windows have grilles.
INTERIOR: wide entrance and stair hall with black and white
marble tiles, segmental-arched coffered ceiling and a good
open cantilevered stone dogleg stair with brass inlaid treads,
curtail and brass column balusters; first-floor rear former
Council Chamber articulated by fluted pilasters to a deep
frieze with festoon, and segmental-arched windows with small
leaded panes; first-floor rear left-hand chamber has fine
Greek Revival-style decoration with palmettes and anthemia,
with gilded pilasters to the narrower end bays, a modillion
cornice, a central round lantern with plate-glass windows,
shallow dome and iron pendant, a fine doorway with architrave
and console cornice beneath the Royal Arms, and 2 good black
marble fire surrounds with Greek Doric columns to an
entablature; ground-floor rooms with panelling, strapwork to
the ceilings and Jacobean Revival-style fireplaces with red
marble consoles and carved overmantels; a Parliament clock in
the first-floor left-hand front room; basement with
semicircular-arched tunnel vaults.
SUBSIDIARY FEATURES: attached cast-iron gates with diagonal
bars and brass finials to the entrance.
Housed the Council House and offices until relocation to
College Green after the Second World War, and after used as
Magistrates' courts. The Treasurer's Office was added when the
House was found to provide insufficient space, was Pope's
first recorded work and an early accurate use of Greek detail.
(Gomme A, Jenner M and Little B: Bristol, An Architectural
History: Bristol: 1979-: 237; Crick C: Victorian Buildings in
Bristol: Bristol: 1975-: 1; The Buildings of England: Pevsner
N: North Somerset and Bristol: London: 1958-: 414).