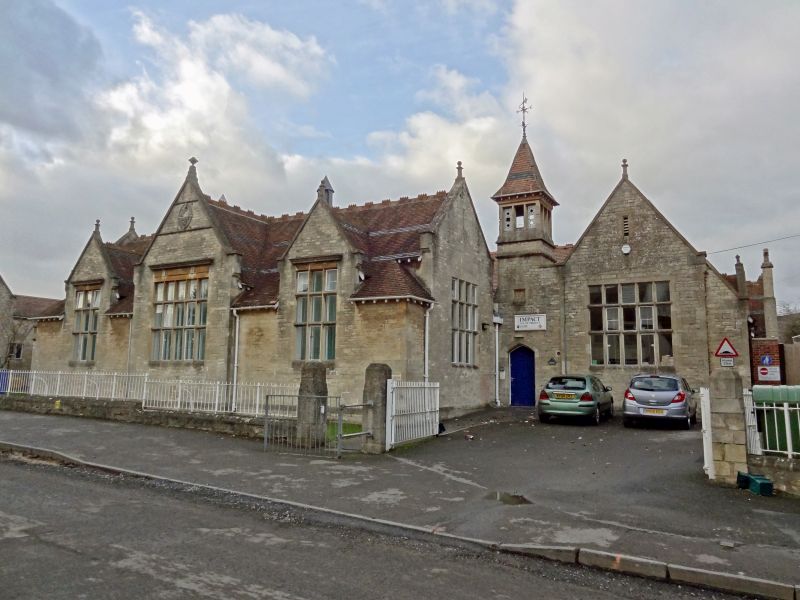 School. Dated 1879, and probably by the same architect as
similar school in Victoria Road. Coursed and roughly dressed
stone with ashlar quoins and dressings; stone-coped tile roofs
with blue tile bands; ashlar stacks.
Plan: Schoolrooms, with assembly hall projecting to front,
built on a U-plan with masters' houses projecting either side
and linked across front by low wall with railings.
Jacobethan style. Central assembly hall and flanking
schoolrooms of one storey. Assembly hall has conical vents to
roof with ridge parallel to front and continued as a hipped
outshut to front broken by 3 gables with floating cornices
over stone mullioned and transomed windows. Lower schoolroom
blocks each have similar windows to flanking gables of
right-angle wings, that to right having arched doorway set
beneath tower with mullioned lantern windows surmounted by
spirelet; each wing has additional outer entrance bay, with
lower ridge parallel to assembly hall, smaller fenestration
and gabled entrance bay with finial coping and arched doorway.
Rear and side elevations in similar style with cross-gables
and similar fenestration.
INTERIOR includes open timber roofs and panelled doors.
Subsidiary Features: 2-storey masters' houses each have
similar 2- above 3-light windows to gable facing road, and
similar fenestration to the inner elevation with cross gable
to rear adjoining schoolroom. Low plinth wall to front
surmounted by plain cast-iron railings with 3 cast-iron gates
flanked by piers of a robust and simple design.
A quite early and skilfully articulated example of a shcool in
the Jacobethan style.