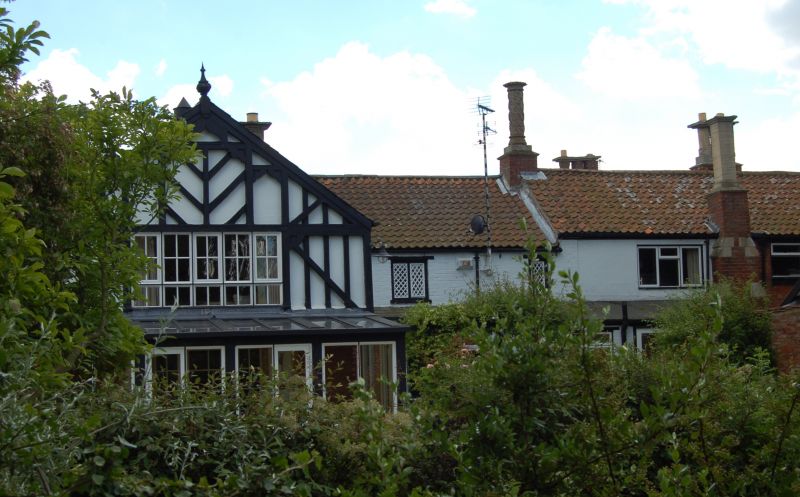 School and school house, now a house. Mid C19, probably
incorporating fragments of an earlier building, with late C20
alterations. Ground floor red brick and coursed squared stone,
with sham timber framing and rendered nogging above. Pantile
and slate roofs with a brick ridge stack with carved brick
coped flue, and various other stacks with coped terracotta
flues. Tudor Revival style. 2 storeys; 5 bays. L-plan. Windows
are mainly C20 glazing bar casements. To left, an open timber
framed gallery with splat balustrade, and below it, a 2-light
casement and a wood cased lead water pump. To left, a square
external stack with stone base and ashlar flue. To right, a
square external brick stack, flanked by 2 casements, the
largest to the left. Below, flanking the stack, small single
windows witch diamond pane glazing, then C20 2-light casements.
Beyond, to left, a plank door with ornamental hinges, and to
right, another diamond paned window. Left gable has a C20 to
casement and is topped with a gabled square wooden bellcote.
At the rear, a square external brick stack with double,flues.
Rear wing has a smaller side wall stack.
This building is one of those remodelled c1820-1840 by Gregory
Gregory, Lord of the Manor of Harlaxton, following the
precepts of JC Loudon.
(The Buildings of England: Pevsner N, Harris J & Antram N:
Lincolnshire: London: 1964-1989: 361-362; Rowlands G:
Harlaxton Manor: Harlaxton: 1984-: 20-29).