Remains of Trentham Hall: The Grand Entrance and conservatory 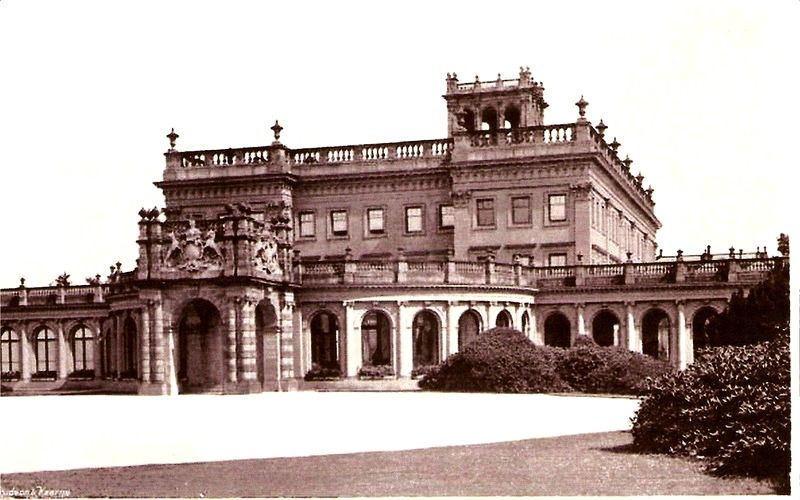 Church of England Parish: Trentham St Mary and All Saints

The remains of the grand entrance and the conservatory at Trentham Hall, designed by the architect Sir Charles Barry in the Italianate style, and built between 1833 and 1842 by James Trubshaw.

The remains of the grand entrance and the conservatory at Trentham Hall, designed by the architect Sir Charles Barry in the Italianate style, and built between 1833 and 1842 by James Trubshaw.

MATERIALS: built of brick that has been rendered with stucco architectural details. The porte-cochère and the balustrade are of stone ashlar. Timber-framed fenestration.

PLAN: the grand west entrance comprises the porte-cochère at its centre, with curved arcades extending to either side forming a semi-circular or C-shaped plan, with a single-storey, five bay wing extending to the south. The north wing has been demolished.
EXTERIOR: the porte-cochère has round-arched openings with a scrolled keystone and widely spaced vermiculated quoins to each of its sides. The archways are flanked by pairs of three-quarter Ionic columns of alternate rusticated and plain stone bands that support the entablature. To each side of the parapet wall, which has a stone balustrade above, is a stone carving of the family’s coat of arms sculpted by Charles Smith and framed by pairs of banded pilasters surmounted by pedestals with finials.

The Ionic order is applied to the single-storey curved arcades and the south wing with three-quarter Ionic columns dividing full-height windows with moulded round-arched heads and scrolled keystones. Above the entablature the stone balustrade has pedestals surmounted by vases at intervals.

The east elevation of the arcade, facing the internal courtyard, uses the Corinthian order. The central round-headed window is flanked by pairs of Corinthian columns, with a curved Corinthian colonnade to either side, terminating with three round-arched windows framed by Corinthian pilasters. The parapet wall has pedestals at intervals, surmounted with vases.

INTERIOR: the internal walls of the curved arcades have scrolled keystones to the round-arched window heads, and Corinthian pilasters between the windows. The east doorway to the south arcade, which would have given access to the connected state rooms, has a decorative ironwork door frame.

Trentham Hall and gardens were established on the site of a C12 Augustinian priory when, in 1540, after the priory was dissolved, it was purchased by wool merchant James Leveson. Under the ownership of the Leveson-Gower family, the house and grounds were redesigned multiple times. From 1630 to 1639 a new house was built for Sir Richard Leveson, in 1707 it was redesigned by William Smith of Warwick, and it was redesigned again between 1737 and 1738 by Francis Smith of Warwick. In the mid-C18, at the same time as Capability Brown enlarged the lake, the house was enlarged by Henry Holland from nine to fifteen bays, and in the early C19 Charles Heathcote Tatham added the west and east west wings to its south elevation.
In 1833, following the death of George Granville Leveson-Gower, the 1st Duke of Sutherland, the estate was inherited by his eldest son the 2nd Duke of Sutherland and his wife, Harriet (née Howard). In the same year they commissioned the architect Sir Charles Barry to redesign Trentham Hall on a palatial scale reflecting their huge wealth. Barry’s scheme included the addition of the grand entrance at the west end, and the erection of a belvedere tower over the old kitchen to the east end of the house. The building of an orangery, sculpture gallery and clock tower and the rebuilding of the stables and service quarters formed the second phase of Barry’s work at Trentham. The design of the Italianate formal gardens is also attributed to Barry, formed of two shallow terraces leading down to the lake with parterres and balustrading, statues, urns, pavilions and fountains as features.

Trentham Hall was largely demolished from 1910 to 1912 (the upper stage of the belvedere tower was moved to Sandon Park, Staffordshire, at this time) and in the 1920s the site became a public pleasure garden. The various structures built for entertainment in the C20, such as the tennis courts, ballroom and open-air swimming pool have since been demolished. The estate is now operated as a commercial leisure attraction.

Trentham Hall was approached from the west via Tatham’s early C19 entrance lodges (relocated to their present position on Stoke Road in the 1920s) and two C19 stone gate piers (that remain). A large turning circle with a statue of Diana on a granite pedestal to its centre gave access to Barry’s porte-cochère that formed the centre of his grand entrance, with the existing mid-C18 house rising behind. To either side of the porte-cochère were curved arcades, marked on Barry’s plan as public and private corridor, leading to the north and south wing and the house beyond. The south elevation of the C18 house, with its fifteen bays divided by six giant Corinthian pilasters, was largely retained with only light remodelling to create greater evenness, and Barry’s belvedere tower with its open, three-bay arcading, provided a vertical emphasis between the main house and the east wing. The east wing was a nine bay, two-storey private wing, inspired by the Banqueting House in Whitehall.

Sir Charles Barry (1795-1860) was a leading architect in the early to mid-C19. Best-known for his design of the Houses of Parliament with AWN Pugin, he was also an influential country house architect, and a passionate architectural gardener, popularising the Italianate style.

The Remains of Trentham Hall: the grand entrance and conservatory are listed at Grade II* for the following principal reasons:

* designed by Charles Barry, a significant and influential architect of the period;
* as the remains of the grand entrance and orangery that formed the frontispiece of Charles Barry’s Italianate style remodelling of Trentham Hall for the 2nd Duke of Sutherland;
* for the quality of its architectural detailing that demonstrates not only the influence of the Italian Renaissance on Barry’s work, but also his sophistication as an architect and his ability to combine formal classical detailing and form with originality;
* for its planning interest in terms of redesigning the entrance to Trentham Hall on a C-shaped plan with designated public and private corridors.
Historic interest:

* as an example of the remains of a pre-1850 country house;
* as one of the earliest examples of an Italianate country house in England, which had considerable influence on the design of Prince Albert’s Osborne House (Grade I) as well as other buildings in England;
* as part of Barry’s architectural work for one of his most significant patrons, the 2nd Duke of Sutherland, who commissioned him on a number of projects and was a key figure in helping to establishing Barry’s reputation as a country house architect.

* with the former orangery, sculpture gallery and clock tower (Grade II) and the former stable block and service quarters (Grade II) as well as numerous listed garden buildings and features within the Grade II* registered park and garden which together illustrate Barry’s Italianate scheme for the Trentham Estate as a whole.