A Grade I Listed Building in Rushton, Northamptonshire 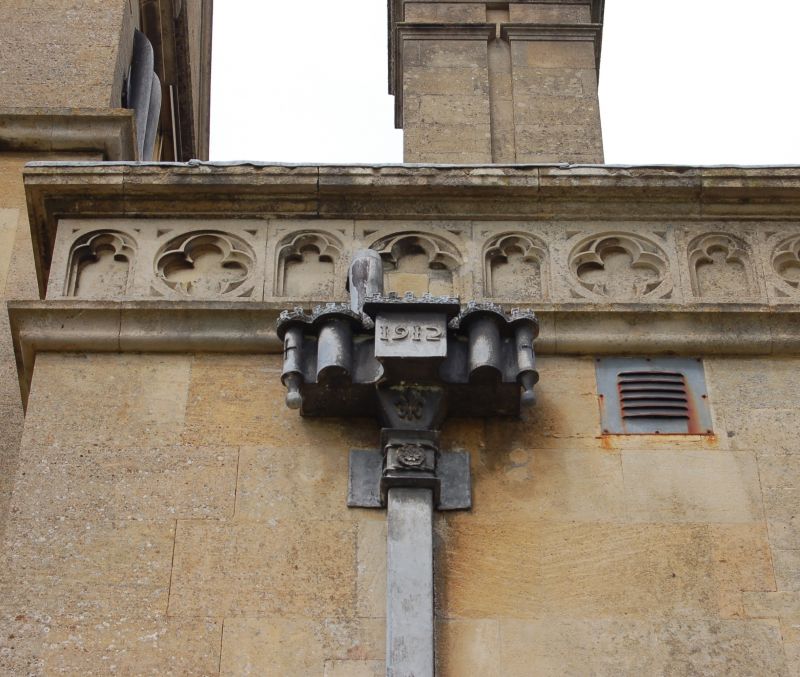 Church of England Parish: Rushton with Glendon All Saints

RUSHTON
SP88SW Rushton Hall School
1337-0/4/230
25/10/51
(Formerly Listed as:
RUSHTON
Rushton Hall)
GV I
Great house, now school. Perhaps early C16 origin, altered and
enlarged late C16 and early C17 (gables dated 1595, 1626, 1627
and 1630), altered and partly reconstructed in C19. Much of
the elaborate interior detail is also C19 or early C20.
Limestone ashlar with Collyweston stone slate roofs, coped
gables and numerous stone ridge and lateral stacks. 2 storeys
and attic. Courtyard plan of 3 ranges with linking screen to
east. East front: screen has broad central entrance, a
round-headed doorway with double studded doors, and niches
containing statues of warriors to either side, divided by
fluted tapering pilasters carrying classical entablature and
Gothic style balustrade of quatrefoils alternating with tiny
trefoil-headed lights (in existence by 1741), carrying
reclining figure with cornucopia and dolphin. 4 bays to either
side, divided by pilasters, each bay with a 3-light stone
mullioned window. Parapet and balustrade with urns. Gable ends
of wings to left and right have 2-storey canted bay windows
with parapet and strap-work cresting, and 6-light
double-stepped (6-lights then 4, then 2) attic windows in
shaped gables with finials. Balustrades and corner finials.
2-storey, one-bay additions to outside of each gable have a
4-light mullion-and- transom window to ground floor and a
window of 2 round-headed larger-than- usual lights to first
floor, and parapet with blind Gothic tracery (pattern as to
central screen balustrade) Interior of courtyard: south
range, divided by buttress, has great hall to right lit by 2
4-light mullion-and- transom windows with hood-moulds and a
tall bow window with castellated parapet. Left of buttress, is
a similar bow window (with some blind lights) added in C19 (or
1905 - date on rainwater head), and C19 mullion and transom
windows. West range much restored in C19, has canted bay
window to right of centre and mullion and transom windows with
hoodmoulds. Buttressed north range, apparently, rebuilt after
fire of 1835, has similar windows and 2 canted bays. String
course below attic storey which has parapet, divided by
pilasters decorated with strapwork, balustrade and 3 gables to
each range. Central west gable is shaped and has a
double-stepped mullion and transom, window (reflecting
gable-ends at north and south ranges) dated 1627. Other gables
are straight-sided some with dates or carved motifs, and all
have finials. Casement windows with decorative leaded glazing,
incorporating some stained glass. South range, extended to south
1848-52 with bow and canted bay windowws, gabled wing projecting
from south end of west front of patchy ironstone rubble with pale
stone quoins and plinth, keyed for render, has coped gables, finial
and kneelers ornamented with tiny trefoils, emblem of the
Tresham family. Interior: great hall has restored hammerbeam
roof. Early C17-style staircase has plaster ceiling with strapwork
and a central pendant with mermaids. Oratory in south-west wing has
painted plaster relief panel of the Crucification, dated 1577. Much
elaborate C17-style, interior detail. Home of the Tresham family from
1438, sold in 1619 to Sir William Cockayne, in whose family it remained
until 1828, when it was sold to W.W.Hope. At his death in 1854 the estate
was sold to Clara Thornhill (later Clarke-Thornhill), after whose
death in 1865 it was leased to various tenants. It is now a school for
blind children.
(Buildings of England: Northamptonshire: pp397-400).