A Grade I Listed Building in Hampton, London 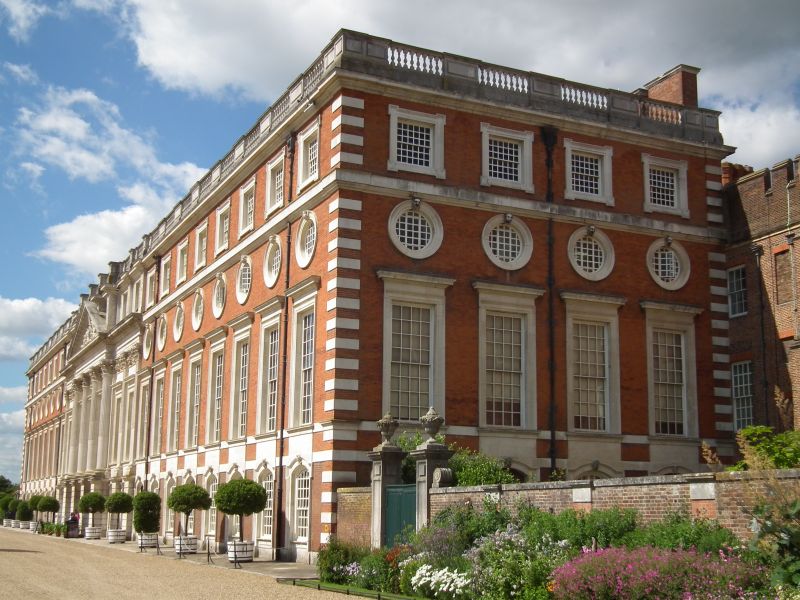 2.
1514 onwards. Walls of brick, with freestone dressings. Roofs covered with lead,
tiles and slates. Begun by Cardinal Wolsey, much of whose work survives particularly
the ranges around the Base Court, the Clock Court and the Kitchen Court.
King Henry VIII made extensive alterations between 1529-40, including the rebuilding
of the Great Hall from 1532 the remodelling of the Chapel (1535-6) and building of
Chapel Court. The extension of the kitchens and the addition of the projecting,
turretted side wings to the west facade. Queen Elizabeth made some changes including
the building of the privy kitchen but in 1689 William III began a major building
campaign with Sir Christopher Wren as architect. This consists chiefly of the
Fountain Court, to the south-east corner of the old palace, on site of Tudor Cloister
Green Court, and the Colonnade in Clock Court. A little work was done under George II,
including the remodelling of the Tudor range, between Clock and Fountain Court by
William Kent who also completed the decorations of Queen's Staircase.
The Tudor ranges are generally 2-3 storeys with mullioned windows usually of 2-4-lights.
Those by Wren have 4 storeys with arched windows or arcades to the ground floors, tall,
square headed windows with moulded surrounds and sometimes pediments to the first floors,
round windows to the second and almost square windows to top storey, treated as an attic
above a stone cornice. Further cornice and balustraded parapet above. Many surviving
interiors, Tudor and later.