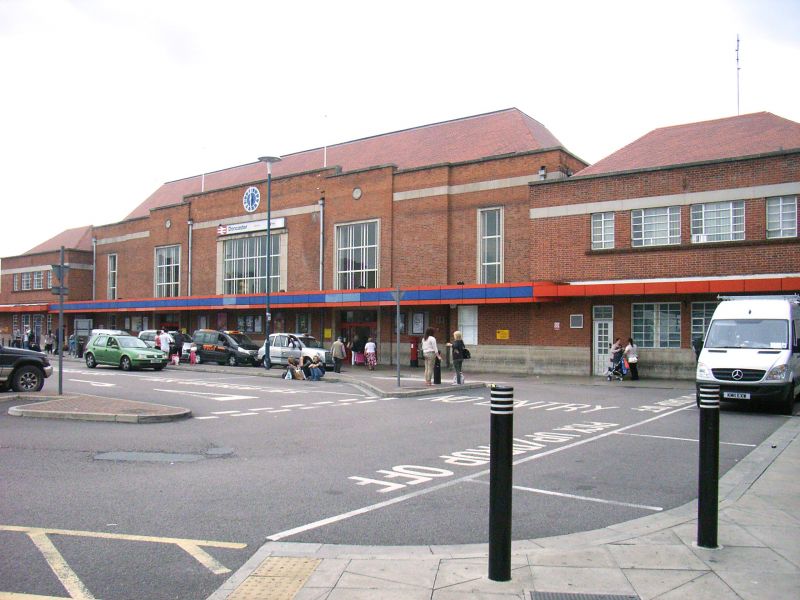 Station booking hall and offices. 1933 for London, North-Eastern Railway.
Red brick with stone dressings and clay tile roofs. Tall single storey 5
bay central block with lower two storey flanking single bay wings which project.
Central block has wide central bay with slightly overlapping and slightly
projecting narrower bays to either side which are flanked by wide bays, each
with slightly projecting blind walling towards the centre. Across the full
width there is a flat canopy at first floor height of the side wings. Wings
have similar canopies. Below the canopy to the central block there is a deep
ashlar plinth with moulded base and decorative band to top. Bays 2 and 4
have wide doorways with architraves; to outer side of each door is a blocked
window with raised surround. Bay 1 has a margin glazed metal casement window
in stone architrave and bay 5 has later addition with similar window. Above
the outer parts of the outer bays have tall'single light margin glazed windows
in moulded architraves and bays 2 and 4 have similar 3-light windows. Central
bay has similar 5-light window but in architrave with reeded jambs and plain
lintel. Wide continuous stone band at eaves height except across bays 2 and
4 which have small stone roundels above the windows. Parapets are stepped
up towards the centre and have flat stone copings. Tall hipped roof. Side
wings have similar plinths, 2 small paned metal glazed windows and door to
ground floor with 2 similar windows above, 2 narrow ones flanking 2 wider
ones, all on brick sill. Plain flush stone band at lintel level of first
floor windows, flush parapets with flat copings. Tall hipped roofs. Interior
of booking hall has polished marble lining the walls to about half height
with wide band to top. Above wall articulated by 4 paired marble pilaster
strips set in recessed panels. Ceiling has three large sunken circular panels
with circular light fittings to centre and sunken bands to sides with alternating
lights and ridged panels. Single storey wing to left of station and rear
C19 block not of special interest.