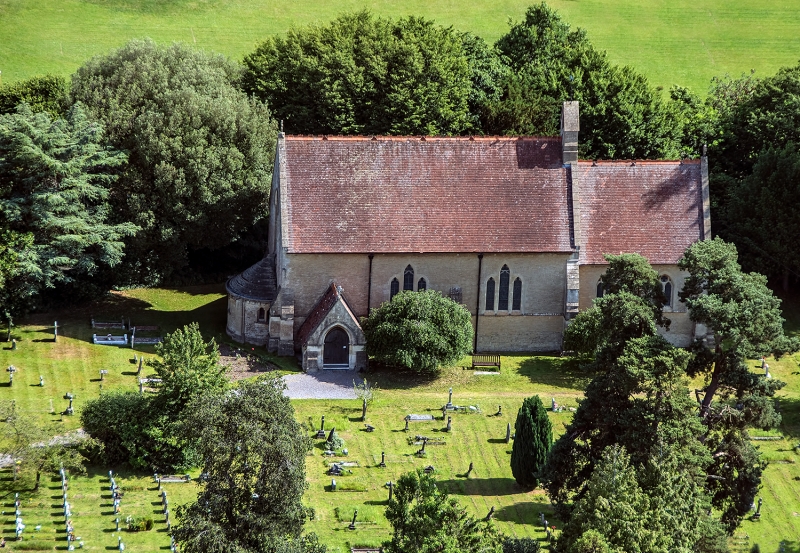 Exterior: The exterior gives an impression of plain solidity, created by the chisel-dressed stone, a predominance of wall-surface to window, and sparing ornament. Street employed a simple late 13th century style with plate tracery. The tall nave is steeply gabled, with two triple-stepped lancet groups on the south side, to the east of the gabled porch. There is a bellcote over the east nave gable. The chancel is slightly lower than the nave, and equally simple, with the east window again of triple stepped lancets. The west gable has a tall narrow two-light window. Below it projects a low apsidal baptistery roofed in stone, with bays defined by slim wall shafts, and small paired windows in each bay. The baptistery complements Street's work in its masculine quality and bold detailing.

Interior: Tall nave with open timbered roofs, and a three-bay north aisle arcade of broad moulded arches on quadrilobed piers. There is dogtooth moulding around the easternmost arch, for reasons unclear. The two-centred chancel arch springs from short moulded wall shafts, and is particularly arresting for its soaring arrow-like shape. In the chancel are two openings into the north chapel (originally seated), now the organ chamber. The arched openings have simple cusping around the heads and a dwarf parapet. The north aisle is low, with a lean-to roof and broad low three-light windows. In the west wall is a blunt-pointed arch giving onto the semicircular baptistery, with a simple vault formed by slim ribs meeting at a central boss.

Principal Fixtures: Fittings by Street, 1864-8: tiling throughout, reredos, low chancel screen wall with brass screen and gates (1868), font, oak choir stalls and free-standing nave benches. The pulpit (made by Mr Strong) is particularly good, of solid stone in drum form with inlaid foliage, cappings and columns of coloured marble, and a big inset marble cross facing west. The reredos is of alabaster, with a gabled centre with Crucifixion.The benches form a complete set with finely cut and chamfered ends, and open chamfered panels in the backs. The glass in the chancel and sanctuary is by Clayton & Bell. The chancel was magnificently embellished in 1911-15 with mosaic and opus sectile murals by Powell & Sons of Whitefriars, to designs by C.E. Ponting. The 'Uplifting of the Brazen Serpent'(N) and 'Christ in Majesty'(S) panels (1911) are outstanding and are well matched by the archangels on the east wall (1915). The murals complement the earlier work, especially in the tonal relationship with the chancel windows. The nave and aisle have smaller mural panels of 1893 to 1930, without the overall impact of the chancel decoration but individually of high quality. The splendid west window of 1931-2 is by James Hogan, chief designer for Powell & Sons; small pieces of intense jewel-coloured glass, showing the influence of American glazing techniques.

History: The population of Warminster's western outskirts was then mostly working class, and the motivation for building St John was the `miserable deficiency of Free Seats in the Parish Church'. The prime movers were William Temple of nearby Bishopstrow House and his son George: they gave the site and £500 in money and gave £300 more as work progressed. Since this was a chapel of ease, Street was instructed that it should not vie with the town churches: he substituted the present bellcote for a planned tower, reducing the estimated cost of £3,260 to £2,700.

George Edmund Street (1824-81) is one of the greatest figures of C19 architecture. Although born and educated in London he was articled to the Winchester architect Owen Carter from 1841. He worked in the office of George Gilbert Scott from 1844 before commencing practice in Wantage in 1848. Growing success led to a move to London in 1856 and a career which saw him become one of the leaders of the Gothic Revival. Much of his work is characterised by a strong, muscular quality which was much admired from the 1850s. He was also an early pioneer of the use of polychromy. His most ambitious work is the Royal Courts of Justice in London for which he gained the commission in 1868. He was diocesan architect for Oxford, York Winchester and Ripon. He was awarded the RIBA Royal Gold Medal in 1874. His fame and status is reflected in the fact that, like his former master, Scott, he is buried in Westminster Abbey.

St John sits well back from the road in an exceptionally spacious churchyard with a monumental lychgate, and fine mature planting of beech, lime and cedar of Lebanon. The church groups well with the neighbouring school to the south-west.

Reasons for Designation: The church of St John the Evangelist, Boreham is designated at Grade II* for the following principal reasons:

* An unspoilt and finely crafted High Victorian church by G.E. Street, one of the most highly regarded Victorian English architects.

* Chancel and north aisle are splendidly enriched with opus sectile and mosaic panels by Powell of Whitefriars, 1890s - 1930.

* Good glass by Clayton & Bell in the chancel, and a jewel-like 1930s West window by James Hogan.