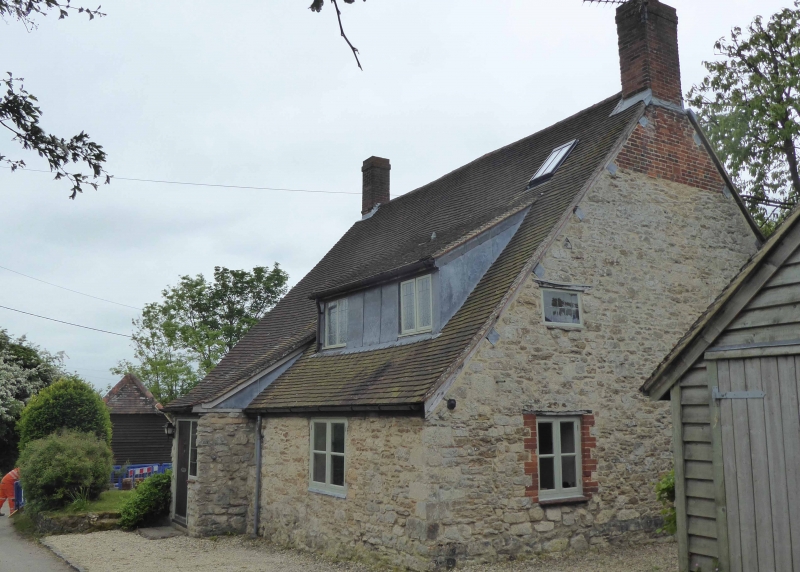 PLAN: two-cell house with an original rear outshut beneath a catslide roof and integral gable end stacks, most likely set out with the main living space and kitchen to the east and parlour to the west. Main range in two storeys and attics with a formal but asymmetrical four-bay south elevation. Added or replaced single-storey kitchen wing to the east. It appears that by the end of the C19 the house had been divided into two cottages, each with an entrance in the gable wall; the former western entrance is now a window. Internally the ground floor has since been opened up, removing the internal transverse wall or walls of the original house. The stairs have been removed and replaced in the late C20. The eastern stack comprises a large fireplace with an adjacent bread oven. The lower pitched-roof service wing has a gable wall stack. The plan of the house and arrangement of the south elevation in four asymmetrical bays is an unusual synthesis of the vernacular tradition and the fashionable 'polite' architecture of the day.

EXTERIOR: the south elevation is in limestone rubble on a shallow, chamfered stone plinth and has flush red/brown brick quoins and dressings. Deep horizontal bands of five courses of brick that respond to the quoins link the inner first floor windows, creating a formal grid in C18 manner. The ground floor has the remains of a similar arrangement that has been altered and repaired. All windows have shallow cambered arches, on the first floor these are in C18 and C19 brick and set close beneath the eaves; these windows also have concrete cills. On the ground floor the central pair of windows have earlier C18 brick cambered arches. The ground-floor window openings have been reduced or enlarged in size in modern red brick and the cills replaced, but the proportions of tall, narrow openings, typical of the C18, remain legible. The eastern window on each floor is wider; on the ground floor having a pair of French windows. Ground-floor windows and doors are all late-C20 standardised uPVC units, inserted into original openings which have been altered to accommodate them. First-floor windows are two and three light later C20 casements with rectangular leaded panes. Set into the roof and above the eaves is a pair of small, hipped dormer windows, in C18 manner, with C20 timber casements. Rebuilt brick gable end stacks.

The west gable wall is of one build with an integrated outshut. There is no plinth. A former and probably inserted side entrance has been partly blocked to form a window. The plinth appears to return to the east gable wall which is otherwise covered by the C19 kitchen wing, which is flush with the south elevation, and by the later extension to the rear of it. At first floor level there is a blocked first floor window to the front of the stack. The northern elevation, beneath the outshut, has an added later C20 porch and a large inserted raking dormer at first-floor level which protrudes beyond the roofline. Later C20 doors and timber casement windows.

INTERIOR: the ground floor of the front range of the main house is now a single space divided by a rebuilt transverse screen. The eastern bay is least altered having a large stack in granite blocks (now painted) beneath a replaced oak bressumer and remains of a bread oven to the north of it, a deep, chamfered elm spine beam, with a 2" to 2 1/2" chamfer and plain exposed joists. The western bay has a replaced ceiling and a rebuilt brick fireplace. The floor level in the western cell has been lowered; a small pit was discovered beneath the floor. The rear wall spine wall, in slender scantling timber framing with replaced brick nogging, is altered and repaired, and to the rear of the western bay was largely rebuilt in the late C20. The outshut has a slender scantling transverse partition - using reused timber when built - where the original roof line is visible. Reused timber is incorporated in the later C20 lobby and stair well. First floor timber-framed transverse partition with added bracing; a deep, chamfered elm axial beam to the eastern cell. Very substantial four-bay butt-purlin roof, but where the purlins are staggered to accommodate the dormers. The rear catslide roof has been altered to accommodate the large dormer which cuts through the purlin and where, again, timber has been reused.

31 Baldon Row is one of a group of C17 to C18 cottages and houses built on the southern side of the lane, their main elevations facing south, away from the lane. They stand away from the core of this dispersed village. In contrast with these vernacular thatched-roofed C17 and C18 cottages and houses, the rear of no. 31 has the characteristics of a vernacular cottage while the more formal south elevation is grander and on a larger scale. The garden front is built of stone with brick dressings and has a tile roof, typical of the more fashionable houses of the day, but unusually it has an asymmetrical four-bay facade, rather than a symmetrical facade, set out in an odd number of bays. Whereas the formally-planned house of this period might have a prominent external stair bay, in this case there is none. The evolution of the house is not fully understood but it appears to be unusual. The deep, chamfered elm ceiling beams and heavy roof structure imply a building earlier in date than the C18. It is possible that an earlier building was refronted in the C18, its vernacular proportions giving rise to the unusual ratio of the facade or, alternatively, substantial fabric from an earlier building may have been incorporated in an C18 house.

The house stands on a terrace, which may be C18 in origin, from which steps descend to the garden. The terrace and garden layout are shown on the 1879 OS map.

The house was built on land owned historically by Queen's College, Oxford, who sold it in the 1950s or '60s. It is shown on the later C19 and early C20 2 1/2 " OS maps, by 1879 with its current footprint which includes the added lower eastern wing. By 1899, as was common in the agricultural depression of the later C19, it was apparently divided as a pair of cottages. It has since reverted to a single house. The C19 single-storey kitchen wing was extended northwards in the 1970s or '80s. The house has been remodelled internally and the ground floor in particular has limited evidence of its historic character. The rear outshut has been reordered and a large raking dormer inserted to accommodate a bathroom.

31 Baldon Row, Toot Baldon, probably early C18, incorporating earlier fabric, possibly C17 and altered shortly after it was built, but all heavily refurbished later C20, is designated at Grade II for the following principal reasons:
* Architectural interest: unusual hybrid of vernacular and polite architecture, either built as such with substantial reused material from an earlier traditional building, or the result of relatively early alterations to an earlier building;
* Plan form: two-cell end chimney plan with integral outshut, vernacular in treatment at the rear facing the lane, with an unusual asymmetrical four-bay, south-facing elevation, overlooking a terrace;
* Materials: heavy, deeply chamfered elm ceiling beams and plain joists; substantial two-tier butt purlin roof, both pre-C18 in form;
* Group value: one of a group of otherwise vernacular C17 and C18 houses built on the south side of the lane.