Roman Catholic Church of the Holy Trinity and War Memorial 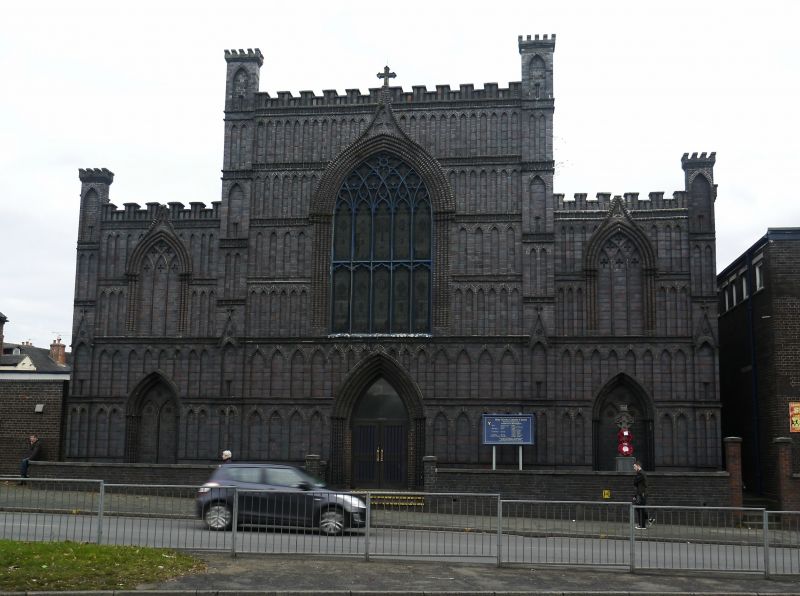 Find accommodation in
Newcastle under Lyme

Roman Catholic Church of 1833-4, designed in the Gothic style by its first priest James Egan. C20 additions to the east end and north-west corner.

Roman Catholic Church of 1833-4, designed in the Gothic style by its first priest James Egan. C20 additions to the east end and north-west corner.

PLAN: it is rectangular on plan and consists of an aisled and clerestoried nave of six bays, with a gallery at its west end and a shallow projecting chancel with an east window. Some later additions to the east end, including a sacristy, anteroom/kitchen and the Martyrs’ Chapel, and an apsidal-ended confessional at the north-west corner.

EXTERIOR: the symmetrical West front is articulated into the nave and aisles by full-height pilasters which are divided into traceried panels and have embattled tops; there are matching lower pilasters at the corners. The nave top is flat and also embattled, as are the tops of the aisles. The entire façade is decorated with tiers of shallow arcading, divided by stringcourses and ornamented with decorative brickwork, displaying a variety of techniques including moulded bricks, bricks with embossed or incised patterns and bricks laid to a projecting diaper pattern. The central recessed entrance has a two-centred arched surround of stepped brick mouldings; the doors are modern with glazed infill above. The six-tier window over the doorway has cast-iron tracery and is set within a giant ogee arch of bull-nosed bricks. There are blind arches in the end walls of the aisles, the lower ones are deeply recessed, while the upper arches have matching surrounds to the west window but in miniature. The aisles are each sub-divided into six bays by pilaster buttresses, and a decorated, embattled parapet of raised diaperwork. Each bay contains two-light Decorated windows with cast-iron tracery. The square chancel has a wooden east window of five lights and a traceried circle with quatrefoil decoration, set within a two-centred-arched surround of bull-nosed bricks. The sacristy has a hipped roof and there are three lancet windows with coloured glass to its south wall. The late-C20 flat-roofed anteroom to the right has a single window and there is a round-headed doorway in the adjacent gabled porch. The Martyrs’ Chapel also has a hipped roof with a square-headed, three-light window to its east elevation.

INTERIOR: the nave has three wide arched main bays with lozenge-shaped piers formed of clustered shafts; each bay is subdivided into two, and from the top of the piers wall-shafts rise to the roof. Each of the main bays has two clerestory windows with Y-tracery and in the spandrels are delicate, rose-window-like piercings. The nave roof is shallow and boarded. The aisles have low-pitched lean-to roofs. In contrast to the side elevations of the nave, its east wall (around the chancel arch) is panelled with two tiers of tall, narrow, cusped recesses. A similar feature, but in three tiers, fill the walls of the shallow sanctuary. The lower part of the sanctuary walls is revetted with mottled pink and grey marble, probably Victorian. The three panels of the sanctuary ceiling are painted with an Agnus Dei and crosses. There is an organ gallery at the west end, carried on two slender columns. The Lady Chapel (north) and Sacred Heart (south) chapels both have richly-carved Victorian stone reredos with niches and numerous pinnacles and retain their contemporary altars. The sanctuary too has an ornately-carved reredos; the carved high altar has been brought forward. The Victorian altar rail with open trefoiled arches and gilding to the spandrels runs the full width of the church. The stone font is octagonal on a square base, and with an intricately-carved timber cover. The east window has Victorian stained glass while the rest, in the aisles, is quite modern. The sanctuary has patterned Victorian floor tiles, and the nave and aisles woodblock flooring was installed after 1964.

SUBSIDIARY FEATURES: to the front of the church is a WAR MEMORIAL commemorating those members of the congregation who lost their lives in the First World War; a further plaque was added after the Second World War in memory of those who died during that conflict. It was renovated in 2000 when the name panels were renewed. The memorial takes the form of a tapering plinth which is surmounted by a shaft and Celtic cross, both decorated with Celtic knotwork carving.

Pursuant to s.1 (5A) of the Planning (Listed Buildings and Conservation Areas) Act 1990 (‘the Act’) it is declared that the presbytery to the east and the community centre to the south are not of special architectural or historic interest and are not included in the listing.

Roman Catholic church building proceeded slowly in the decades between the passing of the Second Relief Act in 1791 and the Catholic Emancipation Act in 1829, being concentrated mostly in rural areas, but by 1826 Newcastle had a recognised mission of its own. The Catholic community began to grow in tandem with the rapid growth of population in the area, and by the first half of the C19 14 new churches had been built in Staffordshire towns. In 1831 Father James Egan, who was attached to the Ashley mission where he had built the Church of Our Lady and St John the Baptist (Grade II), Loggerheads, in a Moorish Gothic style in 1823, moved to direct work at Newcastle. Shortly afterwards, following an offer from a local brick maker of all the bricks he might require, Father Egan designed Holy Trinity Church himself, including the moulds for the bricks. When completed it was described as 'the finest modern specimen of ornamental brickwork in the kingdom' (White, see Sources). Initially only the nave was used for the church, it been intended that were the congregation to increase in numbers the whole would be opened as a church. The north aisle originally served as a 'a commodious residence for the priest' until 1849 when it was incorporated into the church, while the south aisle was used as a Sunday school until 1864 when a separate school was built on the south side of the church. The church was restored in 1886 when a sacristy was added, and in 1896 a new organ was installed. From 1892 the ministry of the clergy was supplemented by the Sisters of Mercy. There have been more recent additions at the east end and north-west corner of the building during the C20, and the current presbytery to the east of the church was built in the late C20.

The Church of the Holy Trinity, a Roman Catholic church of 1833-34 by Father James Egan, is listed at Grade II* for the following principal reasons:
* Architectural interest: for its remarkably confident and carefully-articulated design;
* Quality of materials: for the skilful use and quality of the patterned brickwork and brick detailing to the exterior;
*Historic interest: as one of the first wave of Roman Catholic churches built after the 1829 Catholic Emancipation Act in which the confidence of the Catholic community is manifest;
* Interior quality: the light and spacious interior contains furnishings of quality including richly-carved stone reredos and altars and decorative Stations of the Cross.