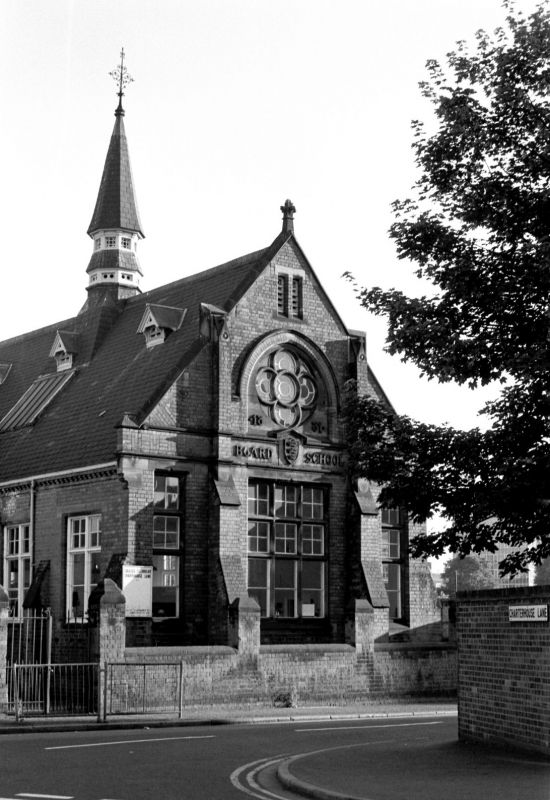 INFANTS' SCHOOL BUILDING: Single storey with the main school room forming the principal part of the building with the gable end facing Charterhouse Lane. Off centre on the left there is a hipped roof porch containing the entry vestibule and cloakroom, off centre to the right there is a short wing with a low gable containing an office and store. To the rear there is a cross wing containing a pair of classrooms flanking a corridor to the rear entrance. Windows are typically wooden framed cross casements with 1 over 1 lower lights and 2 over 2 upper lights that can be tilted inwards. Sills and lintels are stone with a plain chamfer, with the brickwork to the sides of the windows similarly chamfered. The roof features small, ornate, timber gabled ventilators, the gablettes of the cross wing roof also forming ventilators. Cast iron rainwater goods with the guttering supported and partly concealed by moulded and corbelled eaves. The principal part of the building is topped by an ornate octagonal bell tower with steeply pitched slate roof, topped by a cross in ornamented ironwork.
Principal Elevation: The principal elevation is the gable end facing Charterhouse Lane. This features a triple window with mullions and double transoms all in stone to the centre, flanked by single windows with similar double transoms. The lower lights are 1 over 1, the square upper and middle lights are 2 over 2. Above the windows there is a stone band at eaves level that extends upwards above the central window to carry the embossed words BOARD SCHOOL flanking a coat of arms. Above this there is a stone traceried wheel window below a slightly 2 centred brick arch with a stone hood mould. Above, in the peak of the gable, there is a pair of small lancet windows with ventilation louvres. The central window is flanked by buttresses that are reduced to brick pilasters from eaves level upwards. The gable wall rises slightly above the roof line and has a triangular section coping that has a step above the eaves and the two pilasters, with a stone finial at the apex.
Interior: Retains original doors and panelled doorcases. Some of the doors have modern glass upper panels. Blocked fireplaces survive in the main schoolroom and office. The main schoolroom has been subdivided with a stud partition wall and its timber roof structure is obscured by a modern suspended ceiling.

MAIN SCHOOL BUILDING: The main school building is designed with the boys school on the ground floor with the similarly laid out girls school above. Each is arranged around a T shaped main schoolroom with the boys entrance to the front (east) and girls, via an internal staircase, to the side that faces the infants school (north). These entrances, with a classroom to the side, are covered with a double roof with gablettes that is slightly lower than the cross gabled roof covering the main schoolroom. Tucked into the angle of the T behind the stair, there is another classroom beneath a gabled wing, with two further classrooms forming a gabletted cross wing at the foot of the T at the west end of the building. On the south side, tucked into the angle of the T there is a short, gabled wing for a master's room. Windows, roofs, eaves and internal joinery is similarly detailed to the infants school, although for instance the roof ventilators are slightly less elaborate. Instead of a central bell tower, there is a masonry bellcote rising from the north gable wall of the main schoolroom. The added single storey flat roofed extension is not of special interest.
Principal Elevation: The principal elevation faces east and features a gable that is very slightly broken forward from the head of the T. This features a triple window at first floor with stone mullions and transoms that rises as a stone traceried arched window into the gable above. The window has a slightly 2 centred arched stone hood mould above, with a pair of louvred lancet windows in the peak of the gable. To the front of the entrance and classroom wing to the right, there is an entrance vestibule with a gable above the door, hipped to the right. Above the door the stone lintel is embossed BOYS, and above this there is a 2 centred arched fanlight with wheel tracery below a stone hood mould.
Interior: Similarly detailed to the Infants' School.

SUBSIDIARY ITEMS: The school is enclosed by a brick wall with an arched, pedimented entrance onto Wincolmelee, the pediment carrying a stone embossed with BOYS. There are detached toilet blocks in both playgrounds, the girls' toilet block has been modified. In the Infants' playground there is also a detached range of sheds originally for a copper and coal store, as well as a 4 bay single storey building with a central stack identified as a cookhouse. This features 2 over 4 windows with timber transoms with openings matching those of the rest of the school.

HISTORY: Charterhouse Lane, the second oldest surviving Hull School Board school, was built in 1881, and designed by William Botterill, founder member and architect for the Hull School Board. The original architect's floor plans, dated 1880, still survive and show that the school is little altered. The school was opened in 1882 for 251 boys, 251 girls and 243 infants. In 1950 it became Charterhouse High School, a secondary modern, with 150 boys attending in 1963.

SUMMARY OF IMPORTANCE: Charterhouse Lane School is a very well preserved example of the first wave of Board Schools built in Hull. It is very little altered both externally and internally and is well detailed, displaying high quality craftsmanship. The complex roof structures are of particular interest. The survival of the boundary walls and outbuildings is also notable in a national context. Previously only the infants' school building was described in the list description. Although the main school building has a slightly lower level of architectural ornamentation, apart from the later cookhouse, the whole school complex is of a single design and the survival of the whole complex is a major factor in the national significance of the school.