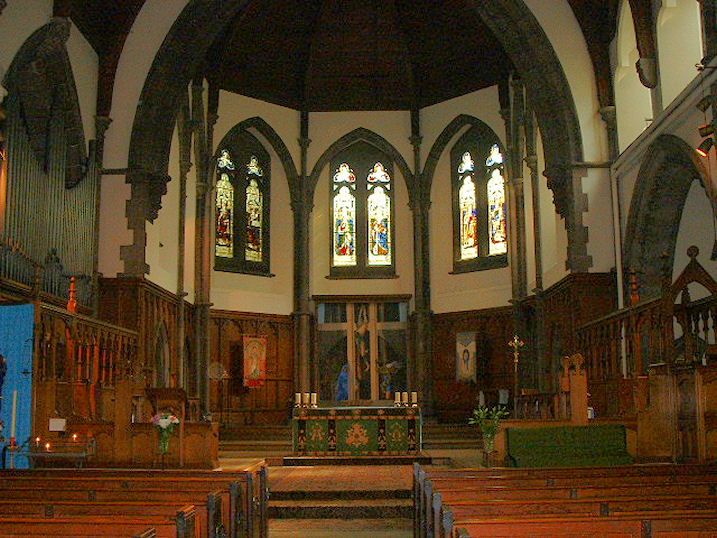 Also known as: Church of St Chrysostom OXFORD PLACE Rusholme.
Church. 1874-77, by G.T.Redmayne. Coursed sandstone rubble,
slate roofs with red cockscomb ridging tiles. Early English
style. Nave and chancel in one, oriented
north-west/south-east, with chancel at south end, east and
west aisles, small tower in angle of east aisle, porch at
north end of west aisle, chapel attached to west side of
chancel. The north gable, forming the principal facade, has
buttresses flanking a shallow gabled porch with a 2-centred
arch which has deeply chamfered jambs and 5 orders of chamfer
to the head, the apex of the gable carried up as a colonnetted
canopy to a statue, two 2-centred arched 2-light windows with
cusped lights and multifoil tracery, and a very small lancet
above. The nave has buttresses breaking through the roofs of
the aisles, and small lancet clerestory windows (mostly 2 per
bay); the aisles have lancets in arcaded groups of 2 and 3;
and the gabled porch on the west side has a 2-centred arched
doorway with chamfered jambs 3 orders of chamfer, a hoodmould
with run-out ends, and a small cusped niche containing a
cross. The 2-bay chapel, parallel to the chancel, has stepped
triple-lancets under gables breaking the eaves, and a
traceried oculus in the gable. The south-east tower has a
buttressed octagonal belfry stage with louvred lancets, and a
short spire. Interior not inspected.