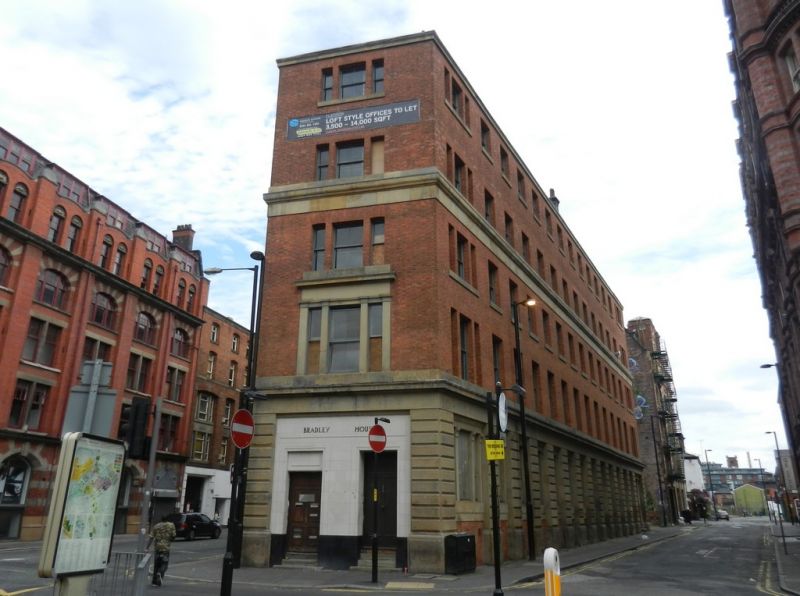 Shipping warehouse, now various workshops and offices. Later
C19, probably for Kessler & Co., merchants. Blackened
sandstone ashlar and brown brick in Flemish bond, roof not
visible. Wedge-shaped plan on island site between Newton
Street on north side and Port Street on south side, with very
narrow frontage to Dale Street. Very plain late-Georgian
style. Basement and 3+2 storeys, with one-bay facade to Dale
Street, 15- and 14-window left and right sides. The basement
and ground floor have channelled piers on punched plinths, and
a cornice band, a similar band divides the 2nd and 3rd floors,
and the parapet has a simple moulded coping. The narrow front
has an altered ground floor with 2 doors, and tripartite
sashed windows on each floor above, that at 1st floor with a
stone frame and cornice but the others in plain brick (a large
signboard between those at 3rd and 4th floors). The sides have
similar plain tripartite sashes at the ends and plain 4-pane
sashes between; a loading entrance to the rear; cast iron
railings to the basement windows (except 6 nearest the front
end, which are blocked); one chimney near the west end of the
north side and another in the centre of the south side.
Interior not inspected. HISTORY: built on site occupied in
1850 by a machine manufactory.