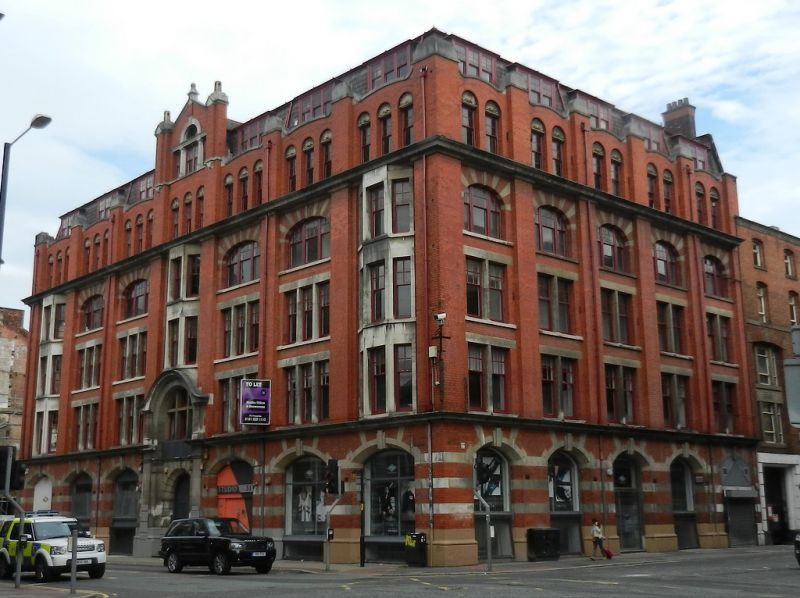 The symmetrical seven-bay facade is divided vertically by piers treated as pilasters (continued at attic level), and horizontally by moulded stone cornices over the ground and third floors and by treatment of the first attic storey as a high parapet. The ground floor has wide segmental-headed windows with banded surrounds and triple keystones (but the sixth bay altered as doorway to No.31, and a plain fascia board over this continued to the right), and a central entrance in a round-headed two-storey arch which has a round-headed doorway at ground floor, a transomed semicircular window at first floor and an open pediment. The upper floors have three-light windows, those in the end and centre bays canted, and all sashed except those at third floor of the intermediate bays which have elliptical-arched heads (with bands and keystones) and transomed glazing. Each bay of the parapet has three small sashed attic windows set in round-headed arches with shell tympani, and a ramped coping; and the attic above has three-light sashes in flat-roofed dormers projected from a mansard roof, except in the centre which has a pilastered gable with a Venetian-style window. All windows have glazing bars in the upper leaves. The five-bay side walls are in similar but simpler style, and have opposed entrances to the rear loading area.

HISTORY: was occupied in 1905 by umbrella manufacturers and the Belgian and Congo Free States Consulate. Included for group value.