A Grade I Listed Building in Chastleton, Oxfordshire 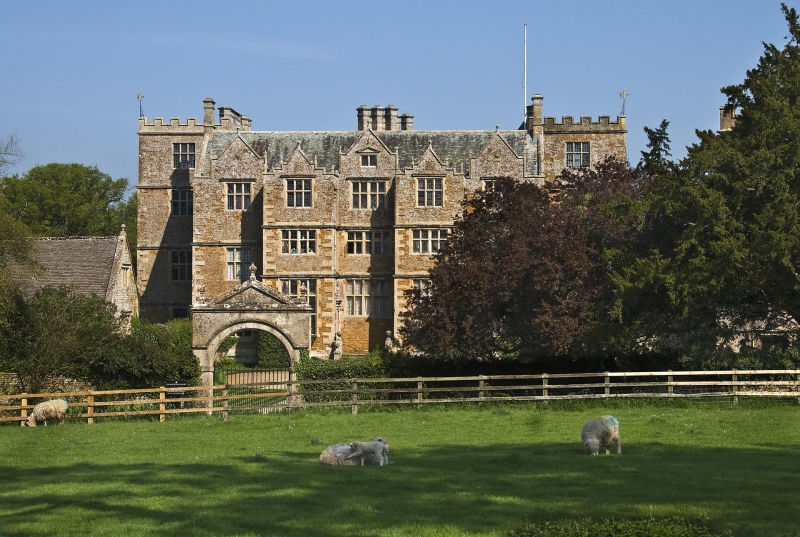 Country house. 1603 to 1618 for Walter Jones, possibly by Robert Smythson; minor
later additions and alterations. Regularly coursed and dressed marl stone rubble
with limestone ashlar dressings and alternating angle quoins; slate roofs. Basic
square plan around small central courtyard. 3 storeys and attic over basement;
moulded plinth, string courses and moulded coping to parapets and stepped
gables. South front. Has 5 narrow gables receding from the centre to the massive
projecting staircase towers on either side; the 2 projecting central bays pushed
closely together giving a strong vertical emphasis, increased by the line of
stepped gables and pinnacles. Mullioned and transomed windows with leaded lights
(some latticed), those on second floor of 5 gables with moulded entablatures.
All ovolo-moulded, those to staircase projections and outer gables of 3 lights,
of 3 lights on second floor of projecting inner gables, of 4-lights to second
floor of centre gable and first floor of projecting inner gables, 5 lights to
centre gable on ground floor and first floor and large windows of 4x3 lights to
ground floor of projecting inner gables. Centre gable has pedimented 2-light
mullioned window with decorative finial to attic. Armorial shields to apexes of
projecting inner gables and decorative roundels to outer gables. Integral ashlar
end stacks with paired and rebated shafts and 3 diagonal stacks behind centre
gable, all with moulded dripstones and capping. Embattled parapets to staircase
projections. Entrance to right wall of left projecting inner gable, approached
by straight flight of 6 steps to centre gable with ball finials to top and
bottom. Fluted pilastered doorcase with fluted frieze, cornice and strapwork
headed arch with hollow spandrels and C19 half-glazed double doors. East side.
Dominated by staircase projection and has mullioned and transomed windows to
gables on either side. Moulded Tudor-arched doorway to staircase projection in
angle with main range. Lead downpipes with dated rainwater heads as on entrance
front, one to left gable dated "1771" and one to right corner dated "1794".
North side. In 5 bays, centre gable forming rectangular projection with entasis.
Mullioned and transomed windows throughout, all of 4 lights (those to second
floor with dripstones) except one of 3 lights to each side of projection on
ground floor with one of 2 lights and 5 lights to projection on first floor and
second floor respectively. 4-light mullion windows to outer bays of basement and
2-light mullion windows flanking projection. Apexes of gables all decorated with
ashlar stepping and finials, centre with scalloped shell above window and outer
with decorative roundels as on front. Lead downpipes with rainwater heads. West
side. Like east side dominated by staircase projection. Mullioned and transomed
windows to gables on left and right and lead downpipes with dated rainwater
heads. External stack with 4 detached and grouped ashlar diagonal shafts with
moulded dripstones and capping to left of tower. Interior. Only rooms open to
public accessible at time of resurvey(August 1987). Lavish decoration based on
contemporary Flemish pattern books, the work possibly by craftsmen employed at
Oxford colleges. The hall follows the traditional medieval pattern with entrance
through a screens passage at one end. This has elaborate strapwork cresting and
a frieze of acanthus scrolls; panelled lower part with 2 arches flanked by
ornate half-columns with satyrs carved in spandrels. Plain stone fireplace to
hall, which has panelled walls with frieze of dragons and grotesques at dais
end. Behind this is a small panelled parlour with blind arcading to overmantel.
Great parlour at back of house has plaster frieze of winged chimaeras and a
ribbed plaster ceiling with fleur-de-lys ornamentation. Staircase in east
projection with treads renewed c.1830 is otherwise original: turned balusters to
carved open string, moulded handrail and carved square newels with pierced
obelisk finials and similar pendants. Similar open well staircase in west
projection. Great chamber on first floor has panelled walls with fluted
pilasters, each main panel sub-divided into sections decorated with blind
arcading, foliage and strapwork. Frieze of caryatids dividing 24 painted panels
of sybils and prophets. Ceiling with pendants and ribs decorated with vine
trails, the space between filled with foliage and flowers in low relief. Carved
and painted stone fireplace, flanked by fluted columns, has overmantel with
strapwork cartouches and arms of Walter Jones and his wife, Eleanor Pope.
Opening from this room is the middle chamber, a small room with C18 panelling, a
C17 frieze of pomegranates and original stone fireplace with the arms of Henry
Jones and his wife, Ann Fettiplace. In a bedroom a ribbed ceiling with great
central pendant and on Italianate frieze of satyrs, lions and scrolls. Wooden
overmantel with Fettiplace arms and 2 figures in niches. Another room on the
first floor has panelling with fluted pilasters and a frieze of blind arches;
fireplace with Ionic and Corinthian columns in imitation marble and an
overmantel with the Sheldon arms and 2 standing figures. Long gallery running
full length of top storey at back of house. Richly plastered barrel-vaulted
ceiling has pattern of interlacing ribs with daisies, rosettes and fleur-de-lys.
Frieze of acorns above panelled walls and grotesque heads to west end.
Overmantel has 2 strapwork panels divided by caryatids. The principal rooms were
originally decorated with tapestries (only a few of which survive) and it is
evident that much of the panelling and plaster-work was designed to fit round
them.
(Buildings of England: Oxfordshire: pp531-S; CL, XLV, 90, l16; Alan Clutton
Brock: A Short Guide to Chastleton House (no date)
[2462]