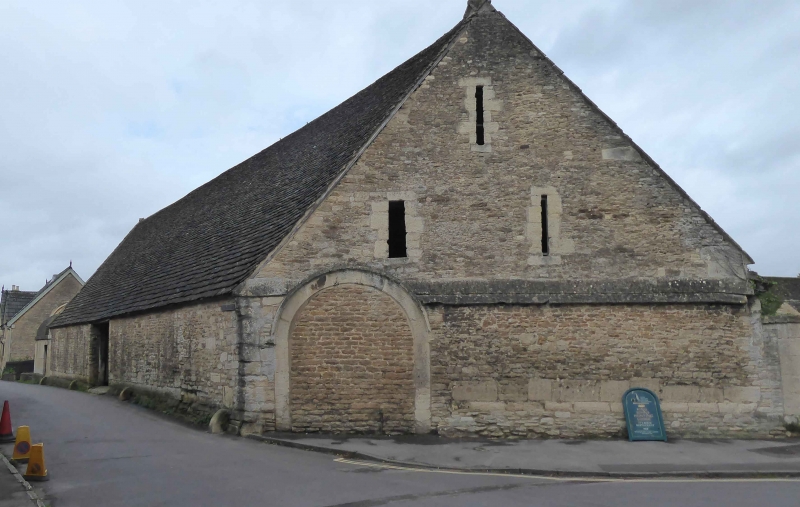 MATERIALS: the barn is constructed of rubble limestone under a stone slate roof.

PLAN: the barn is aligned roughly north-south, with the main entrance to the west and a projecting wing to the east.

EXTERIOR: the barn is entered through large timber doors on its western side, through a square opening which sits roughly centrally along the elevation, which is otherwise plain with no openings and sits under the tall roof of stone slates. The southern gable end, which is angled NW-SE, has an inserted arched opening at ground floor level which was later blocked, and three rectangular ventilation openings in the gable above a drip course, with a moudled stone at the apex. The south gable and west wall stand on plinths which have dressed limestone blocks above. The northern end, which adjoins the adjacent lock-up, has a square opening with a timber door at the upper level of the gable. The projecting east wing has a further set of large timber doors, with smaller doors in the north and south walls, that to the north with a pointed arch.

INTERIOR: the interior of the barn is divided into eight bays by the roof structure of raised cruck trusses with arch-braced collars, the crucks supported on dressed stone blocks. There are two purlins on each pitch, with windbraces between the lower purlins and the wallplates. The east wing has two raised cruck trusses with arch-braced collars and windbraces, and one purlin to each pitch. The wing has iron rods at tie-beam level. Some of the timbers have carpenter's marks, and some have apotropaic protection symbols. The floor of the barn is of beaten earth.

Lacock Abbey was founded c.1230 by Ela, Countess of Salisbury, as an Augustinian nunnery. The barn at Manor Farm was built in the C14, most likely forming part of the precinct wall of the Abbey, and was used for the storage of agricultural produce . Following the Dissolution of the Monasteries, the barn was in general agricultural use, and is understood to have later been used as a market hall for part of the C18, before returning to agricultural use in the C19. The Lacock Abbey estate, including the tithe barn, was taken over by the National Trust in the mid-C20.

The Tithe Barn, Lacock, dating from the C14, is listed at Grade I for the following principal reasons:
* Architectural interest: an outstanding and remarkably intact example of a C14 barn;
* Historic interest: for its association with the medieval Lacock Abbey, and its subsequent agricultural use and position within the village of Lacock;
* Degree of survival: the building retains a high proportion of its medieval fabric, displaying construction and carpentry techniques;
* Group value: it has strong group value with surrounding buildings and the village of Lacock as a whole.