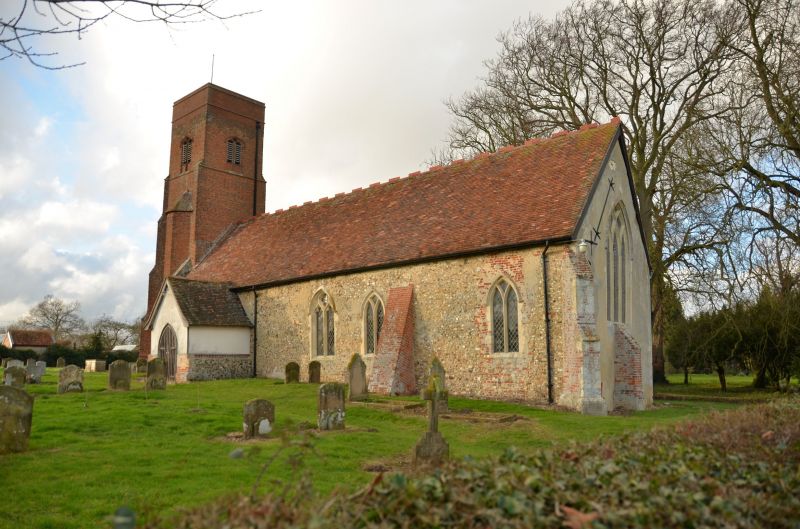 Church. C13 and C15 rubble flint with ashlar dressings and English bond
brick. West tower, nave and chancel below one continuous roof, south-
western porch. Tower: C15, of English bond brick. West face: diagonal
buttresses which die back into the corners via 4 offsets. Slightly
projecting plinth which dies back by an offset. Central ground floor
window of 2 lights with Y-tracery of c.1300, reset in this position.
Windows of 2 louvred lights above with chamfered surround and central brick
mullion. Similar window to the belfry stage which also has a brick hood
mould and rests on a brick band. Further band below the level of the
parapet which is of brick and has an ashlar coping. North face: blank
below the belfry opening, which is similar and has an angle buttress at
left. South face: similar but with a canted staircase turret at right.
Nave and chancel: projecting porch at left of centre with C20 double-doors
at centre. Projecting plinth of red and yellow brick and rendered walling
above. Blank walling to left of the porch and to right of it 3 bays, the
window at left has 2 lights with trefoil ogee heads and a quatrefoil to the
apex. To right of this are 2 windows of 2 lights with Y-tracery (some
renewed) and between them a shoring buttress of C18 or C19 brick. The
walling here is of rubble flint with some brick patching. North face:
blank walling for most of its length. Shoring buttress to left of centre
and at right of centre a 2-light window wih cusped ogee heads. To far
right is a double-chamfered door surround. East face: Central window with
3 lights and interlacing tracery. Diagonal buttress at left and buttress
with single offset below the window.
Interior: Porch: Close-studded walling. Church door with wave moulding,
chamfers and fillets and hollow chamfer. Nave and chancel: a series of tie
beams one bearing the date 1595 in C18 script. Sedilia to one window
ledge. Wafer cupboard to right of the altar with ogee moulded surround and
hood mould with label stops. Early C19 communion rails with stick
balusters. Rood loft staircase to one window embrasure. Font: Octagonal
bowl and stem with 4 lions against stem alternating with buttresses.
Angels with inerlacing wings below the bowl which has roses and angels
bearing shields to its panelled sides.