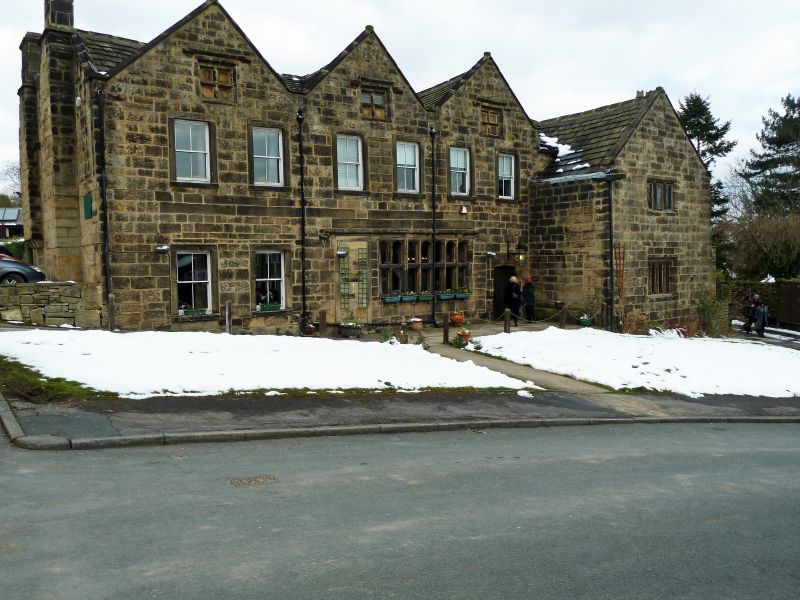 Rear: U-shaped with gabled crosswing to left, gabled hall to centre
with large external stack to right, gabled stair tower flush with
right wing. Plinth. Left wing has 4-light cave to moulded mullioned
deeply-chamfered window with 4 arched lights and sunken spandrels,
3-light chamfered window above. Coped gable with kneelers and base
for finial, set back, hall has 4 x 4-light double-chamfered mullioned-
and-transomed window with cross-window above. Large stack projects
with moulded cornice and rainwater head. Stair-tower has blocked
doorway to left of cross-window with same above. Right wing has
6-light double-chamfered mullioned window set in basement to light
cellar. 6 x 6-light mullioned-and-transomed window with former
5 x 5-light window above altered to 2 sashed lights. Cross-window
to attic. Paired coped gables with kneelers and bases for finials,
set in left-hand return of stair-tower original doorway with Tudor-arched
lintel, sunken spandrels, and cyma-moulded surround with broach-and-roll
stop 2-light window above, corbelled stone gutter. Left-hand return
has 2 gables each with tall external stacks, that to rear carried on
corbells for lst-floor fireplace. Set between, cross-window to each
floor and rainwater chute set in valley between the 2 coped gables.
Right-hand return has 2 lateral stacks reduced in height.

Interior: North wing contains parlour with rear service room and
steps down to contemporary cellar. Parlour has fine oak-panelled
walls reputedly brought from Hawksworth Hall by Jane Hawksworth at
the time of her marriage to Francis Baildon in 1649 (Le Page, p34).
It was probably at this time that the richly decorated plaster ceiling
and frieze were installed. The frieze has the initialls " F B " and
is decorated with vine-leaves, pomegranates and flowers. The ceiling
has fruit and foliage motifs with pendants, and ribs arranged in a
geometric pattern of squares and circles. The chamber above has late
C17 oak panelling with long rectangular panels. The hall has 2 large
spine beams and lateral fireplace with moulded jambs and replaced
pointed lintel (wooden). Chamber above has Victorian plaster cornice.
Opening off the hall, at junction with North Wing, is fine original
closed string, framed newel stair with heavy square newels decorated
with strap-work and with flame-finials, moulded handrail and finely
turned balusters. At junction with hall and south wing is screens
passage with pointed-arched doorways (timber) the centre one wider
and formerly leading into a passage separating the ground floor of
wing into 2 rooms each with fireplaces contemporary with stone
encasing. 2 posts either side of screen rise to support king-post
trusses. 1st floor of 3 bays. Front bay has closed truss with 'A'
struts and close-studded wall with fragments of plaster decoration
dated 1618. 2-bay rear room has fine open truss with tall king-post
and tie-beam with knee braces. Wall plate and close-studded wall at
junction with hall-chamber. Transverse cross-beams morticed into
posts support the exceptionally heavy 1O" x 8" laid-on joists.
Eastern gable (rear) has similar closed truss on the inside of gable
wall. Roof timbers virtually intact with heavy rafters. The wing
would appear to be a floored solar wing, heated by an external stack
on the side wall. The single bay chamber with plaster decoration
dated 1618 had a fragment, now perished, decorated with the Christian
symbol of a fish and thus may have been a chapel originally. The
seat of the Baildon family. A house of importance with the rare
survival of a late medieval timber-framed cross-wing and finely
panelled and plastered C17 parlour with a good original staircase.
J. Le Page, The Story of Baildon, (1951). RCHM (England) report.